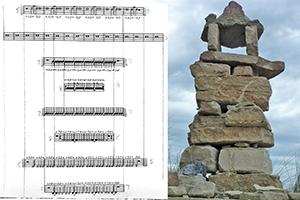 Ojai North’s offshoot from the famous festival down south began Monday in Faculty Glen with an outdoor hour performance presented by Cal Performances of exquisitely graduated, nature-inspired sounds from a wedding present years ago. Steven Schick, artistic director of the San Francisco Contemporary Music Players and organizer of the performance, had walked all the way from San Diego to San Francisco to propose to his wife Brenda, who’s a land conservationist. His best friend, Alaskan composer John Luther Adams, presented the couple the score of Inuksuit for their 2007 wedding. Its premiere occurred two years later in Banff, and it has been played dozens of times since in a wide variety of locales, by varying numbers of performers, and with different aesthetic consequences.

In the glen, next to UC Berkeley’s Music Department offices, the quiet and relatively stationary crowd of 500 or so seemed to have a mellow time relaxing attentively in the surround sound of drums, airhorns, conches, whistling tubes, shakers, ball bearings rolling in drumheads, gongs, bells, triangles, cymbals, glockenspiels, bullroars, tom-toms, tam-tams, and more, played by 21 percussionists. In Manhattan’s Park Avenue Armory in February, however, a much more active crowd milled about a far more cacophonous realization that led New Yorker critic Alex Ross to declare that it was “one of the most rapturous experiences of [my] listening life.”

I saw only one example of that extreme here, a man performing ecstatic body movements. Most of the few other people walking about instead being content with their spots were journalists like myself. I experienced no improvements in my experience by exercising, except for the time I moved away from a couple of oblivious gossipers.

So, what’s it all about? Inuksuit means “cairns” in Inuit. An inuksuk (singular) is one of thousands of piles of stones placed in arctic North America by Native Americans and imitators. Some are humanoid in design. Their functions are multipurpose, with spiritual components, and usually conjectural. Adams and Schick refer to them as sentinels. Inuksuit is divided into 5 phases for three groups of players. For two of the groups, the second and fourth phases consist of notes in staves constructed like inuksuit (see photo illustration). The notes are played analogously to building and dismantling inuksuit: First one stave is played, then two together, then three, and so on till all 8 are sounded simultaneously. A reverse process operates for the fourth phase.

The rest of Adams’ structure likewise builds and relaxes the dramatic content. The first and last of the five phases emphasize air actions, and are labeled “Breathing” and “Wind.” During those phases, many of the percussionists move about the performance space. The middle and loudest phase, “Waves,” focuses on dynamic swellings and subsidence. A final touch in the last phase adds “Birdsongs” played on xylophones and glockenspiels. When played outdoors, the actual birdcalls notated by Adams are reported to cause an increase in the chirps of tree-resident spectators. Whether they are cheering or booing cannot be determined, but there was no question that Inuksuit the bipedal mammals present were at least rapt if not rapturous: Few were consulting their iPhones.

I too enjoyed the experience, another example of a best thing in life being free of charge. I could have done without the airplane that circled around about two-thirds of the way through. Also, I felt the sirens brought cognitive dissonance to the precivilized timelessness of the rest of the music. In an urban setting, sirens have often negative associations and are too machine-like. Schick defended their use on three grounds: They’re an homage to Edgard Varèse, the inventor of the term “organized sound”; they’re capable of sinusoidal dynamics; and you can hear them easily. Well, you can organize sound using remarkably audible gunshots, but there’s too much of that around here already. Birds are preferable.

You can find more information on the background and performance history of Adams’ fascinating composition here.