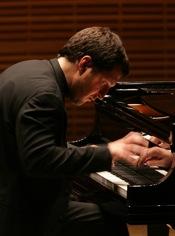 Lisa Hirsch on March 19, 2010
The British composer Thomas Adès has been writing intricately structured and colorfully orchestrated music for nearly two decades now. Before he became a composer, though, he trained for a career as pianist, and he has the formidable technique and deep musicianship of a great player.

On March 16, San Francisco Performances brought him to Herbst Theatre for a concert that showcased him as both composer and pianist. Adès gave a sensational performance of a brilliantly idiosyncratic program: a pair of opera paraphrases, by himself and Liszt, formed an anchor around which he scattered a short piece by Schubert and works by Janáček, Prokofiev, and Beethoven that amount to collections of miniatures.

Adès describes his Concert Paraphrase on Powder Her Face as "freely transcribing" for piano four scenes from his notorious first opera, which recounted in explicit terms episodes from the scandalous life of Margaret, Duchess of Argyll, "rather in the manner of Liszt or Busoni." The work was co-commissioned by San Francisco Performances, the Vancouver Recital Society, and the Barbican, London. This performance was its U.S. premiere.

And it most certainly is Lisztian in style, with its runs, arpeggios, trills, and sense of being a free fantasy on preexisting themes. Powder Her Face won’t be familiar to many American listeners, although one of its few U.S. performances was given by the Berkeley Symphony in 1997. Based on this performance, and on what I already know about the opera, I’d love to see it performed locally.

Adès evidently incorporated a wide range of styles in the opera, because the paraphrase has passages that are bluesy, or jazzy, or sound like ragtime. There’s even some austere Baroque-style counterpoint. If you’re thinking the paraphrase might be something of a pastiche, like William Bolcom’s Songs of Innocence and Experience, it’s nothing like that. Adès is too subtle a composer and his music too complex.

The paraphrase has other Lisztian virtues: As performed, it really did sound made up on the spot, despite the musical complexity. It’s long and a bit rambling, which might or might not be a virtue, depending on your taste. And in keeping with the apparent theme of the rest of the program, it also managed to sound as if it incorporated a series of miniatures.

The paraphrase, which ends on a quiet note after all its dazzling details, starts with a mighty bang. And the bang was a big surprise, because Adès dove into it without pause following a flowing and yet intensely focused account of Schubert’s great Allegretto in C Minor, D. 915. What a contrast that made! The Allegretto, like Schubert’s lieder, takes apparently uncomplicated material and distills it into a work of infinite depth and subtlety.

Adès opened the program with a haunting performance of Janáček’s On the Overgrown Path, Book II. These five moody character pieces have some of the childlike naivety and nostalgia of Schumann’s Kindszenen, with just a touch of Moravian melancholy and little of the percussive vigor of the composer’s later work. Adès took an understated and ruminative approach, with flexibility in tempo and rhythm that added to the dreamy quality of several of the pieces. The closing piece in the set has the character of an opera aria, with recitativelike sections and a funeral-march ostinato. For this Adès played with suitable drama.

Immediately following the Janáček came Liszt’s Isoldens Liebestod, more a transcription than a paraphrase of the final scene from Wagner’s Tristan und Isolde. While a piano can never capture the shifting hues of Wagner’s orchestration, Liszt voiced the transcript with great care and maximum color. Adès caught the marvelous ebb and flow of the Liebestod with the freedom and assurance of a great conductor or a great soprano, building to a grand climax and then dying away to the hushed closing chords.

The first half of the program closed with a brilliant and witty performance of Prokofiev’s cheeky Five Sarcasms, a product of the composer’s youth. They’re genuinely funny pieces, the first much like circus music — shades of Shostakovich — and the second stuttering along as if accompanying the action of a silent film. Two of the other miniatures have the kind of perpetual motion and jackhammer rhythms characteristic of Prokofiev throughout his career.

The program closed — almost — with perhaps the grandest miniatures of all, Beethoven’s Six Bagatelles, Op. 126, late pieces that the composer wrote with considerable formal and stylistic freedom. Adès played these with an intimate and improvisatory feel that was both concentrated and spacious.

The composer received such an ovation that he came back for an encore ... and another ... and another. A flowing Liszt Valse oubliée was succeeded by a familiar selection from Prokofiev’s Visions fugitives and, finally, by a hushed rendition of Couperin’s Les Barricades mystérieuses. If it were 1850, I’m sure we would have kept him, or tried to keep him, for another hour.