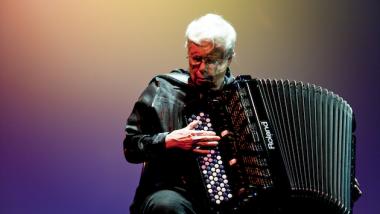 Of the many artists and musicians who passed away in 2016, Pauline Oliveros hit me the hardest. I did not know her personally — in fact, I had only seen her in concert once, at Other Minds 20 in 2015. Nonetheless, I looked to her as a musical forerunner, an explorer, a pioneer whose steps I humbly and respectfully strive to follow. Over a 50-plus year career, she broke new ground in the realms of electronic music, improvisation, and the quotidian act of listening (for a recent look on the many layers of meaning in Pauline’s “Deep Listening” practice, see Kerry O’Brien article in the New Yorker.)

Oliveros was among the founders of the San Francisco Tape Music Center, a largely unaffiliated composers’s collective, and a bit of a rarity at a time when electronic music was generally supported by corporate, government, or educational institutions. The SFTMC ended up disbanding around the time of its institutional affiliation with Mills College in the late 1960s, but its spirit of experimentation and invention continued through Mills’s Center for Contemporary Music and the Bay Area’s overall fertile musical ground. sfSound’s annual Tape Music Festival is a spiritual successor to SFTMC and on Sunday the modern-day collective honored Oliveros in a program showcasing nearly two hours of her work in the medium.

The excitement in composers’ writings of Oliveros’ postwar generation, from Karlheinz Stockhausen and Pierre Schaeffer to John Cage and Oliveros, was palpable: the flexibility and freedom from logistical constraints that tape music allowed, meant their fantasy could run free in fashioning novel sonic landscapes. 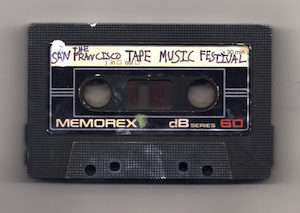 The S.F. Tape Music Festival is quite strict in its approach: no live performance, only fixed playback (occurring digitally, rather than on actual tapes), with the exception of the rare, real-time processed piece. Performances occur in the dark, to an empty, unlit stage. Without visual distractions, the purely sonic medium is allowed to shine: As the press material for the festival puts it, this is cinema for the ears.

Sunday’s program included seven of Oliveros tape works, dating from 1961 to a 2000 reworking of an early piece. Her approach to electronic music is striking and incredibly accessible, despite the length of some of the works (two of which clocked in at over half an hour each). Many of the pieces are the recorded result of real-time improvisation and processing, deftly navigated by the composer with a variety of electronic setups ranging from oscillators and tape delays to bathtubs and cardboard tubes. Such household items make up some of the sound sources for Time Perspectives (1961), a four-channel work the composer recorded (in real time) in her home, manipulating tape speed to alter the pitch of the sounds, sometimes with humorous effect.

By contrast, Sayonara Sirenade 20/21 (1966/2000) explored a much more meditative soundscape, with slowly moving clouds of sounds traveling across six channels to effectively envelop the audience; Lion’s Tale (1989) also made use of spatial effects, employing a computer program developed by composer Carter Scholz to rework recorded samples from Oliveros’s own gamelan piece Lion’s Eye into a groovy and dazzling showpiece.

When sticking to mere stereo, however, Oliveros could still pack quite a punch. In Rock Symphony, excerpted from the happening-style Theater Piece (a 1965 SFTMC collaboration with the San Francisco Mime Troupe), recognizable tidbits from the Beatles, the Animals, Paul Revere, and others are juxtaposed with echo-drenched segments from Mario Savio’s “bodies upon the gear” speech, effectively cementing the bond between popular music and protest at the time. Due to its use of unlicensed samples, this work is rarely heard, and represents an early forerunner to the plunderphonics of John Oswald and countless hip-hop artists.

Similarly, Bye Bye Butterfly (perhaps Oliveros’s most enduring piece from the period) combines a virtuosic improvisation for dual oscillators — with the unavoidable sci-fi character they evoke, thanks to their use in  movie soundtracks—with the spontaneous and brilliant integration of excerpts from a recording of Puccini’s Madama Butterfly. The meaning is multi-layered: As the oscillators first imitate and then overwhelm the singers, machines overtake humanity. In her own notes on the piece, the composer added a further political dimension, bidding farewell not only to older musics, but also to the patriarchal and oppressive culture from which they arose. 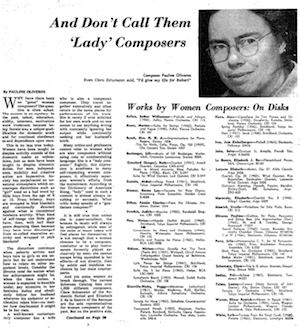 Politics were a continuing concern for Oliveros; As a practitioner of noncommercial art, a woman, and a lesbian, she faced a staggering amount of resistance against her work. In her famous New York Times essay “And Don’t Call Them ‘Lady’ Composers,” she advocated both for the egalitarian evaluation of composers’ work, regardless of gender, as well as a more open-minded attitude towards new music in general. Big Mother is Watching You, a colossal 30-minute improvisation for 12 oscillators tuned outside of the range of hearing, serves as a sort of persuasive exhibit to her already well-articulated argument: transcendent, sonically awesome, and sometimes slightly menacing, the work explores combination tones, resonances that you can actually feel in your body, and phantom psychoacoustic melodies for a sonic experience of epic proportions. Heard in the darkness of the Victoria Theater on a rainy San Francisco January night, it was one of the greatest musical moments of my life.