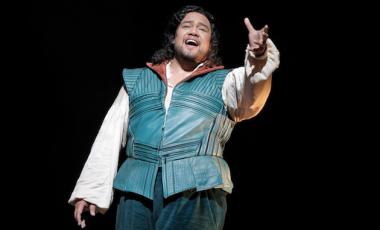 San Francisco Opera added another element, if not by design, to the Friday, September 6, curtain raiser on the company’s 97th season at the War Memorial Opera House: a bit of chaos. Part of it came a few days in advance of the opening, when word came that tenor Bryan Hymel was abruptly out as the male lead in Gounod’s Roméo et Juliette. Unspecified “personal reasons” were cited. Hometown favorite Pene Pati, a Merola and Adler Fellow program alum who was previously scheduled to sing the final Roméo on October 1, took on the part, opposite soprano Nadine Sierra, for the entire run. (Amina Edris will be his Juliet on that closing night.)

The second surprise came during opening remarks by general director Matthew Shilvock, when demands to “Impeach Trump!” rained down from the audience. Perhaps, in advance of a tale about families locked in mutual discord and disdain, an invocation of today’s fractious politics made a certain kind of sense.

If this production of Gounod’s romantic, long-winded adaptation of the Shakespeare original didn’t scale the heights, it was anything but an afterthought to the various disruptions. Both leads sang their substantial and demanding roles with conviction and color. Conductor Yves Abel induced a lush and pointed performance of the score, notwithstanding a few tempo disagreements with the singers.

The chorus, which opens the opera with a spoiler number about the tragedy to come and then returns on several important occasions to pay witness to the story, sounded assured and uniform throughout. Several singers distinguished themselves in supporting roles. Baritone Lucas Meachem was a combustible Mercutio. The sonorous bass James Creswell gave Friar Laurence moral authority and a rueful humanity. Mezzo Stephanie Lauricella made an ebullient turn as Stephano, Romeo’s taunting page, in her winning single aria.

The ample musical pleasures were not so well served by the physical production or Jean-Louis Grinda’s often stodgy staging. This joint venture of Teatro Carlo Felice and Opéra de Monte-Carlo featured a pallid, self-effacing palette, from an ugly striped scrim to painted drops. The balcony scene took place on what appeared to be a long retaining wall (sets by Eric Chevalier). Carola Volles’s sumptuous costumes did the visual heavy lifting, from the masquerade ball at the beginning to the sword fight scene, in which Grinda did his most fluid and dynamic work.

However it’s told, the story of Romeo and Juliet is always about the impetuous lovers.

That’s especially true in this 1867 opera, with a libretto by Jules Barbier and Michael Carré that pares down Shakespeare’s interest in the social and familial politics and zeroes in on the passion, from rapture to wedding to bedroom to tomb.

Sierra’s Juliet made a strong impression from the start. Her larky coloratura singing at her birthday ball (“Je veux vivre”) was playful, effortless — the voice of a nimble young girl ready for anything. Pati sang with an alluring tone in the balcony scene (“Ah! lève toi soleil”), but there was something constrained in his performance early on. The best was still to come.

As the story heated up, so did Pati, whose voice bloomed open with fresh urgency and power. He brought the house down, with what may be the year’s longest sustained high note, at the end of fight scene that leaves both Mercutio and Tybalt dead and Romeo banished.

If some of the stage business between the lovers failed to ignite, their voices blended yearningly in both the bedroom and tomb scenes. Sierra made her youthful delicacy count, whether she was anguishing over the faux-death elixir she was about to swallow or floating the faintest pianissimo. Pati was at his most tender and touching near the end, his tone stricken and porous yet still lovely he approached the presumptively dead Juliet on the tomb. Their farewell duet, a hopeless plea to fly away, was quietly sublime.

Audiences love the kind of late-replacement rescue Pati performed. It helped of course that he knew the part and was set to go on later in the run. But the cheers that greeted him and Sierra at the curtain seemed genuine, heart-felt and might even have even carried a deeper resonance. Some divisions can be healed. People can rise when adversity strikes. Love, not anger, is the force for change.

The tenor withdraws from the company’s production of Roméo et Juliette.