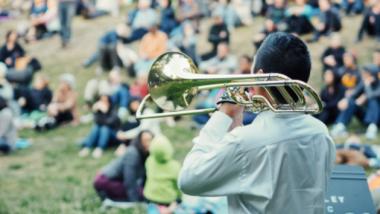 As I walked quietly the perimeter of UC Berkeley’s Faculty Glade last Thursday, soft strands of John Luther Adams’ Sila unravelling all around me, the crunching of dead leaves under my feet providing a gentle counterpoint, I realized: This is what it feels like for your life to have its own soundtrack.

Eventually I found a spot where I thought a cluster of singers would be able to balance their tenuous lines with the more blaring brass and woodwinds, situated a hundred feet across the glade; I sat down and listened to the rest of Sila, closing my eyes to the warm glow of the late spring sun. Sila may not be the first work to be written for an outdoor orchestra, but to judge it solely on those terms would be akin of disparaging any conventional orchestral piece for not being the first one written for indoor performances.

Adams’ work unfolds at a peaceful, organic pace (the 80-plus musicians are unsynchronized), as each player sounds long, breath-like tones drawn from the first 16 partials of the harmonic series over a B-flat fundamental. Named after an Inuit word that translates as “the breath of the world,” Sila is the music of the wind, the crashing of waves, the ritual vibration of air that humankind has engaged in since the beginning of time. The result was awesome, in the original meaning of the term, and a spectacular opening to the Ojai at Berkeley festival by Cal Performances.

Later on Thursday night, festival director and hardest-working-man-in-the-business Steve Schick conducted members of the International Contemporary Ensemble and soprano Melissa Hughes in a performance of A Pierre Dream, a production of Chicago Symphony Orchestra’s Beyond the Score series. Dreamlike, the multimedia presentation combined fragments of Boulez’s interviews, diaries, and music to attempt to capture the essence of one of the towering figures of the post-war era. The result was at times humanizing, at times illuminating (as when “recycled” musical material between separate compositions was highlighted), and at other times a little boring.

Though the reverse chronological presentation really showed how much Boulez’s music has relaxed into a kind of sensuous romanticism over the years, the fragmentary structure really did not do the music justice. Frankly puzzling decisions (such as the omission of the Boulez-Cage correspondence, and the pedantic, emphatic reading of the translations of the texts for Marteau and Improvisations sur Mallarmé, where supertitles would have more than sufficed) were only partially balanced by the musicians’ surefire performance.

Lou Harrison’s Concerto for Pi’pa and String Orchestra, performed by Renga and dedicatee Wu Man, was the highlight of the evening. The work showcases Harrison at his most syncretic, harnessing the idiomatic features of the Chinese lute —  such as rapid-fire tremolos, expressive bends, and overall quick-decaying sonority — and integrating them within a sensibly orchestrated accompaniment (though the performance was gently amplified in Hertz Hall, the piece is very much designed so as to not require any technological help, in line with Harrison’s stringent acoustic requirements).

Wu Man, an undisputed virtuoso, brought the necessary clarity, wit, and energy to the music’s often-changing effects. After the rousing, closing Estampie (a Medieval dance form made of repeating couplets that Harrison used throughout his career), soloist and conductor treated the audience to an unexpected but thoroughly welcome encore on pi’pa and hand-drum.

The second half of the program reflected the festival’s overall emphasis on the percussion repertoire — paying homage to one of the truly defining forces in 20th century music. Carlos Chavez’s seldom-heard Toccata balanced two formalist movements, in which drums and keyboard mallets dominated, with a more coloristic interlude featuring cymbals and gongs.

As with other percussion music from the 1930s and ‘40s, Chavez’s pieces demonstrated how the lack of conventional melodic instruments allows rhythmic, textural, and timbral motives to come to the front more clearly. The concluding piece, Alberto Ginastera’s Cantata para América Mágica, upped the percussive ante by deploying an impressive battery of idiophones plus two pianos and celesta. Soprano Hughes had little chance of competing dynamically, even with amplification. From an aesthetic standpoint the effect was confusing; I had definite impression that the near-inaudible text was supposed to be heard, not consumed by the sonic assault.

The instrumental fourth and comparatively quieter fifth movement were considerably more successful than the previous ones in allowing the evocative, pre-Columbian inspired lyrics to come through. In the last movement the voice finally got its revenge, intimating cymbals, rattles, and drums to be quiet, before getting the last word in.