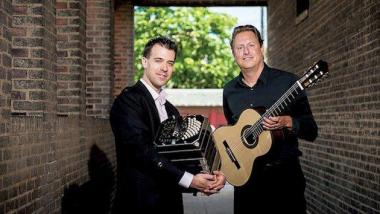 Barely off the plane from Memphis, guitarist Jason Vieaux and accordionist Julien Labro took the stage of the Herbst Theatre on October 20 for a spectacular demonstration of how many ways their two instruments could converse, conspire, and ultimately soar with one another. Part of this year’s San Francisco Performance series, long-time collaborators Vieaux and Labro offered an all-20th-century program ranging from Bulgaria to Brazil, with each selection showcasing the palpable delight each of them takes in playing as a duo.

While the program led us to expect Labro to play bandoneón, he brought instead his five-row Cavagnolo button accordion, tricked out to strip the chordal stops from the left hand. In a post-concert Q&A session, he explained how this allowed him both to construct his own complex chord voicings and to provide melodic and harmonic runs at will with both hands.

The moody opening piece, Fratres, by Estonian composer Arvo Pärt, gave the two a chance to demonstrate the precision of their harmonies and the delicacy of their dynamics as they navigated the piece’s emotional shifts. It also served as the evening’s introduction to Labro’s arranging gifts, finding a wholly-new emotional palette for the piece first composed for piano and violin.

But it was with the first two movements of Radamés Gnattali's Suite Retratos (Portrait Suite) that the duo clearly began to enjoy themselves. In the Choro, urgently taut accordion notes would hand off with an extraordinary lightness to Vieaux's buttery guitar tone. The Valse seemed as informed by musette as by Brazilian technique, perhaps by virtue of the accordion’s button configuration, perhaps due to Labro’s utter fluidity in the French traditional vocabulary. Whatever the French influence, though, it built to a fiercely Brazilian finish.

For Pat Metheny’s Antonia, Labro pulled out a mouth-blown accordina, sort of a 3-row button melodica. Standing and swaying for the piece, he blazed through a series of distinctly un-Metheny improv runs before Vieaux took his turn with an emotionally-rich, delightfully unpretentious solo, notable for some angelic harmonics. They finished the first half with Astor Piazzolla’s Escualo. The playfulness escalated, with Labro dancing in his seat, nearly cracking Vieaux up before Vieaux returned the favor by inserting a Bob Marley quote that did not go unnoticed by the gratifyingly young audience.

Bulgarian composer Rossen Balkanski’s Prelude and Scherzo seemed to be the deepest technical waters the duo ventured into, requiring total attention to the notation. Their interplay through the weird, descending harmonies of the Prelude seemed a little stiff at first, as the piece clearly demanded total concentration. But then Labro was once again smiling beatifically, swaying with eyes closed as Vieaux matched his every nuance. The quiet, final passages stunned the hall. And then followed the Scherzo, largely in a Balkan 11, that hit like an electric shock with both guitar and accordion attacking the baffling emphases with grinning intensity and abandon. This movement was, to judge by the audiences’ explosive approval, way too short.

The final two movements of Gnattali’s Suite Retratos revealed both Vieaux’s and Labro’s finest technical abilities and the sweetest solidity of their duo interplay. Perfectly matching runs and dynamic ebbs and flows in the Schottisch were followed by the Corta Jaca movement and a chance for Vieaux to deliver possibly his most blistering guitar work of the evening.

An encore of the 1985 Tears For Fears pop hit “Everybody Wants to Rule the World” seemed entirely in keeping with the informal, conversational mood of the program. Vieaux handled most of the commentary throughout the program, providing just the right inclusive spirit and dose of humor. Vieaux and Labro cannot disguise the joy they get out of playing together, a joy that makes their instrumental mastery that much more enjoyable to hear. Indeed, they make no attempt to do so.

Albany-based Danny Carnahan has been performing folk, pop, and traditional music on various stringed instruments for 40 years and has been writing music and writing about music for 35 years. For more information, visit his website.

George Martin: In His Own Write