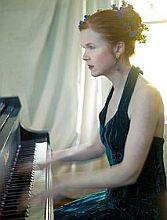 Piano recitals don't often come with a title, beyond the ubiquitous "Famous Pianist Plays Chopin and Brahms." Sarah Cahill took the name of her recital, and her commissioning project, from the lecture Martin Luther King Jr. gave on receiving the Nobel Peace Prize: "We must see that peace represents a sweeter music, a cosmic melody, that is far superior to the discords of war."

Cahill, a famed and formidable performer of new music, has commissioned 18 composers to write works about peace "that can provide solace and inspiration," according to a recent interview in California Alumni Magazine. She played nine of the works at Hertz Hall on Sunday, in a program that she will also perform in New York City, Chicago, and Houston. Eight of the nine received their premieres, and all were performed simultaneously with collaborative videos produced by video artist John Sanborn, to whom the pianist is married. Classical composers can draw on well-worn tropes for representing war, including marches such as "Mars, The Bringer of War," from Holst's The Planets, or the use of trumpets and drums, as in the last movement of Beethoven's Ninth Symphony. How, though, to represent peace?

Cahill's "Sweeter Music" composers have taken a variety of approaches, with varying degrees of success. Mamoru Fujieda, Peter Garland, and Yoko Ono chose the path of serenity. Of these, I found the two movements from Garland's After the Wars, which opened the concert, most successful. The first, "The nation is ruined, but mountains and rivers remained," based on a poem by the classical Chinese poet Tu Fu, contrasted a rumbling, crashing bass with consonant blocks of sound in the middle and high registers of the piano, suggesting a kind of calm grandeur. The second, based on a Basho haiku, "Summer grass/all that remains/of young warriors' dreams," is similar in emotional tone, but uses contrasting musical material, with a looser metrical scheme and a more processional tone. Of Fujieda's The Olive Branch Speaks, little remains in memory beyond an impression of peaceful repetition, though I note that Cahill played the work toward the end of a long and varied program, and perhaps it would have made more impact on me if I'd heard it earlier.

Ono's Toning left a lasting impression, yet not the kind the composer was likely aiming for: The piece is simpleminded in the extreme, consisting of block chords built on each step of a C-major scale, with a few notes played in contrasting octaves thrown in for good measure. The composer provided an explanation constituting the most fatuous and arrogant nonsense I have ever read. It's too long to quote here, but I encourage interested readers to take a look at the program notes, which are posted at the Cal Performances Web page for A Sweeter Music. Cahill played Toning with the same beauty and variety of tone she brought to the much stronger After the Wars, making the most of the weak material Ono provided.

The two longest and most complex works on the program, Frederic Rzewski's Peace Dances and Jerome Kitzke's There Is a Field, were also among the most musically satisfying. Peace Dances, like many of Rzewski's other works, incorporates a wide swath of vernacular music, including nursery tunes and folk songs from many countries, but the surfaces and structures are so intricate that on first hearing those themes were not easy to discern. Nonetheless, the dense and often contrapuntal music, written in vastly contrasting styles, demanded, and got, the audience's attention. I hope the work joins Rzewski's other classic works in the piano repertory of the late 20th and early 21st century.

Like After the Wars, Kitzke's There Is a Field is structured around poetry, in this case by Rumi and Whitman. Kitzke calls on the pianist not only to play the piano, but also to sing, whistle, and use the side of it as a drumhead. At times, the gorgeous music, by turns virtuosic or sorrowful, contrasted sharply with the horrific Civil War photographs projected on screens behind Cahill. Interspersed among the varied works on the program were four movements (of 17 total) from Larry Polansky's B'midbar. I wish we could have heard them all together, or heard more of them. They ranged in style from highly contrapuntal to deep stillness, but it was hard to get a grasp on the overarching thrust of the piece when the sections were played apart from one another.

The pioneering composer Terry Riley contributed a rag called Be Kind to One Another; it's much longer and more rambling than you'd typically find in a rag, and his program notes said that the piece grew out of improvisations that eventually became favorites of his young grandchildren. It's a charming piece, accompanied by childlike videos. At the other end of the age spectrum on the program came the haunting Dar-al-Harb: House of War, by Berkeley composer Preben Antonsen, age 17. The piece starts with the hands far apart at the extremes of the keyboard, playing independently and in opposition to each other, both spatially and rhythmically. As the work progresses, it becomes more and more violent and agitated, escalating even as war escalates.

John Sanborn's videos raise some musical performance issues worth considering. Clearly, the video and music were intended as equal partners in the performance, given what Cahill and Sanborn had to say about the videos, and given the presentation, with three enormous screens arrayed behind Cahill. Sanborn's videos were mostly more complex and definitely more successful than those of Jean Baptiste Barriè, which accompanied music of Kaija Saariaho in Los Angeles in 2007. Of the "Sweeter Music" videos, some were simplistic or uncomplicated, depending on how much an individual liked them, such as the waving cartoonish grass accompanying the second movement of After the Wars or the swirling blue and green pinwheels backing Riley's rag.

The series of Matthew Brady photographs likely have enormous emotional resonance for most people familiar with the American Civil War, but have they become too familiar through overexposure? I found them enormously powerful, while a friend called them "Ken Burns porn." The music of drum no fife, by the San Francisco collective The Residents, more or less disappeared under the rapid barrage of images and frequent onscreen vocal interjections by a masked individual (presumably a Resident). At their best, the videos were arresting and appropriate, as in the Brady photos and the images and film of dancers accompanying Rzewski's Peace Dances, yet even at their best, they could be extremely distracting, to the point of overwhelming the music. And the music is what I'd like to focus on at a recital, especially one played with the technical brilliance and musical depth that Cahill brought to this program.