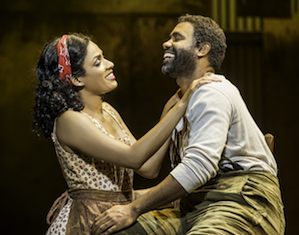 Stephen Sondheim, often accused of writing operas under the guise of what most people — including himself — call musicals, once defined the difference by saying it's up to the venue: On Broadway, it's a musical; in opera houses, well, you know. This vague definition never really worked: Just consider how many of Sondheim's own musicals are being performed in opera houses (except, incongruously, in our own War Memorial, which is getting ready to host Show Boat instead).  So, do they change genre according to the place?

The reason for bringing this up is that the awkwardly/legally-named The Gershwins' Porgy & Bess, now playing as a "musical" at the Golden Gate Theatre, was an opera when produced at the War Memorial three years ago.

And here is the bottom line: Opera house or Broadway makes no difference, music theater is good or bad, something that entertains and moves or just "a show." The good news is that the The Gershwins' Porgy & Bess at the Golden Gate Theatre is outstanding on every count — musically, dramatically, and especially by the strength of performances from a cast without a weak link.

Porgy & Bess has had many versions, from the original 1935 stage production as an "American folk opera," to Otto Preminger's (!) 1959 film, to various small-scale productions, and then — starting from David Gockley's Houston Grand Opera in 1976, with Gershwin's complete score — as a revival triumph in opera houses around world, and the current Eric Owens-Laquita Mitchell film.

What arrived in San Francisco this week is the national tour of a new Broadway production, championed by Gershwin estate executors/guardians (and San Francisco residents) Michael and Jean Strunsky; produced by Jeffery Richards; with a book by playwright Suzan Lori Parks; a musical score adapted by Diedre L. Murray; a 23-piece orchestra led exceptionally well by music director Dale Rieling; and directed boldly and with visceral impact by Diane Paulus.

Costuming is simple, the set is threadbare, even against the logistical minimalism of touring productions. The show prevails on the wings of inspired, dedicated, and uniformly fine performances. Pulling it all together is Rieling and — I never thought I'd say this — Acme Sound Partners.

Having suffered through four decades of routinely overamplified musicals, even in small venues, I am relieved and grateful to hear such an unintrusive and well-balanced sound as this show offers. With a few brief exceptions in the second act, the listener is not bombarded by amplification, the orchestra is present, but not stepping on the singers.

The combination of uniformly careful diction, balance within the pit and between orchestra and singers, and — again — those vocal performances results in a memorably good musical experience. Additional kudos to Rieling and the singers for not milking excessively the "big numbers" in the score, but integrating them into the whole.

The cast of  26 — a relatively small number — is wondrous in every aspect of performance: singing, acting, dancing. First among equals for me is Alicia Hall Moran as Bess; in addition to pitch-perfect, unshowy singing (with occasionally slack diction), she conveys a character that is a more human, believable, and sympathetic Bess than I've seen. This is not a diva singing the role of Bess, but rather Bess herself.

Except for the necessary strutting at her entrance with Crown (the imposing, scary Alvin Crawford), Moran (a Redwood City native, who is making it big on Broadway) consistently portrays a simple, subjugated, abused woman, who finds — believably — emotions and strength within against all odds. It's a moving, memorable performance, the perfect match for Nathaniel Stampley's Porgy, also a singing-acting triumph, with a frighteningly, and probably dangerously, accurate appearance as a cripple. His is not "for show," but an extreme twisting of limbs that may well have consequences when done nightly.

Stampley's warm baritone and Moran's soaring soprano embrace in their big duets — "Bess, You Is My Woman Now" and "I Loves You, Porgy" — and they are tremendous, but not set numbers, but properly part of the work. The audience response is wisely restrained because you don't want to stop the flow of the drama.

Clara ("Summertime") and Serena ("My Man's Gone Now" and "Doctor Jesus") usually steal the show with their famous numbers; here, Sumayya Ali and Denisha Ballew, respectively, are wonderful, but resist from delivering showstoppers — in the bad meaning of the word. This P&B, thankfully, is not a series of hits, but a living, breathing, involving, affecting drama.

In addition to the nonstop ensemble performance in choral/dance numbers such as "Oh, I Can't Sit Down" and "Oh the Lord Shake the Heaven," individual solos are first-class, mentioning just a few: David Hughey's Jake with "A Woman Is a Sometime Thing"; Danielle Lee Greaves as Mariah with "I Hates Your Strutting Style"; Kingsley Leggs as Sporting Life, of course, with "It Ain't Necessarily So"; and the amazing "Street Cries" with Sarita Rachelle Lilly, Chauncey Packer, and Dwelvan David ... and more. Lots more.

There are two young local notables in the ensemble: Roosevelt Andre Credit and Kent Overshown, both from Oakland. I cannot say that they will go far because they already have. It's all good, all now, all here.