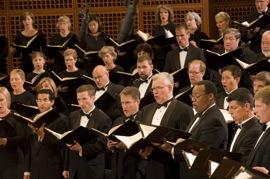 Janos Gereben on March 13, 2010
Every time I hear what Gustav Mahler did not call his “Resurrection Symphony” — but others did — I think about what the work must have sounded like to the first listeners 115 years ago. Sure, they had heard “big sounds” from Beethoven and Wagner, though without Stravinsky, Bartók, and others in their ears, what could they have made of Mahler’s dizzying complexity?

Listening to a grand performance of this work by Michael Tilson Thomas and the San Francisco Symphony in Davies Symphony Hall on Friday, I felt strong empathy for those late-19th-century concertgoers as intense and contrasting feelings swept by in the first movement (Allegro maestoso). Within minutes, turmoil yielded to longing to utter sadness to chaos, then briefly resolved in a quiet but tense passage — with more, much more to come.

Even today, Mahler demands more attention and participation from the audience than most composers do. Within my lifetime, rare Mahler performances were marked (and blemished) by large segments of the audience departing long before the end.

On Friday, I didn’t have a good view of the balcony, but it’s fairly certain the packed orchestra section had no premature departures. How well were the faithful rewarded at the end of the 90-minute musical marathon!

Mahler’s ethereal Finale and Ragnar Bohlin’s Symphony Chorus melded into the tranquil, blissful, hushed sounds of ”Aufersteh’n ... wirst du” (You will rise again), the slow crescendo, and the final “soaring to the light that no eye can comprehend.”

Mezzo-soprano Katarina Karnéus’ “Urlicht” (Primal light) was surpassingly sincere and beautiful in its simplicity. The Chorus’ whispered passages reached deep inside the listener. With her soprano section coming at the edge of the choral crescendo, Laura Claycomb’s solo excelled in its clarity and power, not just sheer volume.

MTT conducted the first half of the work with the score closed in front of him, and it’s clear — after Mahler has become a kind of house composer for the SFS in recent years — that the music is well in his blood. With all the layers of complexity, the work kept “singing,” with lines and statements both clear and easy to follow.

Conductor and orchestra gave a special, authentic lilt to the dance theme of the second movement, in playful sarcasm to the third movement’s “St. Anthony’s sermon to the fishes” scherzo that Mahler borrowed from his own Knaben Wunderhorn.

The violin sections, split on both sides of the conductor downstage in the European fashion, played and played, with dedication, fortitude, and precision. Concertmaster Alexander Barantschik’s solos were bright and warm. Coping with Mahlerian gigantism, the 10 horns (Robert Ward, principal), eight trumpets (Mark Inouye), and 76 trombones (just kidding), and the like, did well. Even so, with extra players and much coming and going to staff the offstage brass on both sides, some — very few — bloopers were heard.

In the end, that 100-piece orchestra played second fiddle to the glorious chorus, given both the nature of the music and the excellence of the voices. Even with the Last Judgment, Redemption, and Resurrection marching by, the culminating vision of primal, eternal light portrayed by the human voice trumps it all.

Writing in his book Viva Voce long ago, MTT put his finger on the essence of the Second Symphony:

It follows the Romantic era’s favorite symphonic format, the trail first blazed by Beethoven’s Fifth Symphony, namely sorrowful minor finds its way to joyous major. This very simple but satisfying idea is carried out on a mega-scale.

In a way, Mahler’s first three symphonies are three different versions of the same piece, growing ever more assured. The joyous endings become ever more majestic ...