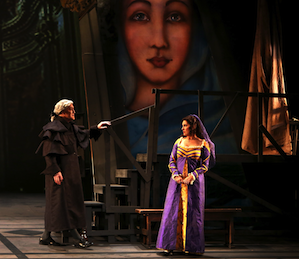 Ah, West Bay Opera! When will I believe what I see? How can I explain what I hear?

Here we are in Palo Alto's 400-seat Lucie Stern Theater, the curtain goes up on Puccini's Tosca, and what you see — believe it or not — is the grand nave of Rome's Sant'Andrea della Valle church.

Music Director José Luis Moscovich motions to his 23-member orchestra and you're surrounded by the sound of a major philharmonic.

In the Te Deum, a chorus of about 30 voices (including members of the Silicon Valley Boychoir) channels the Mormon Tabernacle Choir.

And, perhaps most amazing of all, beyond outstanding performances by Stacey Stofferahn's Tosca and David Gustafson's Cavaradossi, there is the towering, hulking, delightfully pure evil Scarpia with the mighty, sustained voice of Philip Skinner, and a star turn that would earn ovations in any opera house. (Never mind the wig not even Trump would wear; "no one's perfect.")

This is a new production of the opera, with Jean-Francois Revon's sets, his and Frédéric O. Boulay's projection designs — squeezing the huge Rome church, Farnese Palace, and the roof of the Castel Sant'Angelo into a tiny stage of 26 x 36 x 16 feet.

The great bonus here is Moscovich's musical direction, in his Tosca debut. Between urgent, passionate surges of music in this, one of the most melodious and gripping of all operas, Moscovich links Puccini's varied tempi and dynamics seamlessly. A special accomplishment is his casting of three impressive principals.

In the title role, Stofferahn gives a consistently reliable and assured vocal and stage performance. "Vissi d'arte" (I lived for art) is pushed a bit (the power is inherent in the aria, it doesn't need extra effort), but it's solid and winning.

At the end of Act 2, after she dispenses with Scarpia (awww, couldn't we have him sing some more?!), Stofferahn does something special with the phrasing of her lines, conveying both shock and sorrow.

Gustafson bravely overcame some obvious respiratory problems, and his second "Vittoria!" was foursquare on the mark, full-throated, powerful. It's a big voice in a small theater, and once the listener gets used to the audible gearshift reaching for high notes, it's a credible, enjoyable performance.

Richard Harrell's stage direction is praiseworthy for keeping it all simple, without a smidgen of Euro-nonsense. Lisa Lowe's luxurious costume design — save the puzzling black ruffles for Scarpia — belies the company's financial resources.

(Pre-curtain speeches are a bother, but Moscovich managed to make his funny and appealing, denying the rumor from Washington that WBO's credit limit will not be raised: "First, we have no debt, second, with your help there won't be any in the future. Your donations are welcome." WBO's annual budget is around $500,000 versus San Francisco Opera's $71 million, and there is not a shadow of corresponding difference between production values.)

Besides a few blown notes in the brass, there was one noticeable weakness as the result of the reduced orchestra: the lack of force in the Scarpia motive of those three sinister chords opening the opera and returning several times; they should be a hard-hitting fortissimo ... but weren't.

An academic footnote: Has anyone seen reference to Scarpia's first name? A long time ago, a source long forgotten suggested the still-remembered theory about Tosca's scourging "Avanti a lui tremava tutta Roma!" indicating that Scarpia's first name is Louie. It's difficult to prove otherwise.