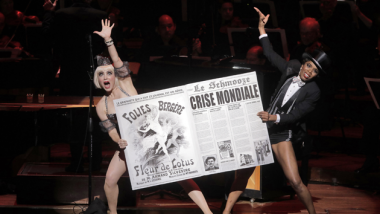 Pulling Out the Stops for the Modern Age at S.F. Symphony

The SoundBox aesthetic has come to Davies Symphony Hall. Last weekend’s “Music for a Modern Age” program was full of extra-musical stimulation via lighting, visual projections, and theater. The summer season hasn’t yet started, but it feels like it has.

If SoundBox programs tend toward miscellany, Friday’s program at Davies, of 20th-century American music, offered a strong point of view as well as the premiere of a substantial work (by Michael Tilson Thomas, who conducted). Still, the inclusion of extra-musical elements created a variety show of variable success.

Two works by Ives, that contrast instrumental forces, were apropos. It was novel to watch the percussionists (on chimes) and brass players, who are usually hidden at the back of the orchestra, play in completely different schemes in From the Steeples and the Mountains. In The Unanswered Question, the strings, usually front and center, were hidden offstage. Their performance unaided by visual cues, the exposed chords sounded especially vulnerable, in the best way.

Four Preludes on Playthings of the Wind, Michael Tilson Thomas’s 30-minute work with soprano soloist Measha Brueggergosman, was more rag-tag. The piece has had a long gestation period (Thomas made sketches in 1976) and stylistically, it’s all over the map. Unusual colors populate the first section: High string lines accompany the solo bass clarinet, and the piano and lower strings periodically rumble in the background. Pizzicato bass lines and the vibraphone’s melodic doubling begin to feel jazzy; overall, it’s halting and disorienting music.

The subsequent vocal writing is interesting, and Brueggergosman navigated the florid, Stravinsky-esque lines as magnificently as she hummed and sang in the low range — and she looked like she was having a ball.

Other parts, like the recitation of the Carl Sandburg text we’ll hear again and the introduction of additional singers, feel gratuitous. Several times, the sound of a cash register seems to transport the orchestra into a more overtly jazzy world, and in these sections, the large ensemble, ostensibly split into a chamber orchestra and “bar band,” is like an undelightful Rube Goldberg machine. Overly complicated part-writing reveals that the music isn’t particularly original or current; a small combo would probably have a better effect.

Adam Larsen’s visual projections, of abstracted background textures, don’t contribute much, and it feels like pandering to bring in visuals so inconsequential. They didn’t detract from the music, at least.

In this theatrical version directed by Patricia Birch and Tilson Thomas, dancers Kiva Dawson and Erin Moore partake in plenty of gags, most of them dumb (if knowing). Four men from the orchestra gamely play along, pretending to be swept up in an evening of naughty fun; their oafish dancing is the least awkward part of the choreography, which consists of a lot of preening.

On the one hand, it’s commendable that such a large organization took such a large risk. On the other hand, the results weren’t good. If this is the “modern concert experience” as the concert’s description declares it to be, then I’ll retreat to a hermitage.

The program could have ended earlier on a high note, with the selections from Lou Harrison and Richard Dee’s Suite for Violin with American Gamelan. What expressive and beautiful playing by longtime associate concertmaster Nadya Tichman: sweet in the Air and explosive yet graceful in the Estampie, with better octaves than I’ve heard from big-name soloists on the same stage.