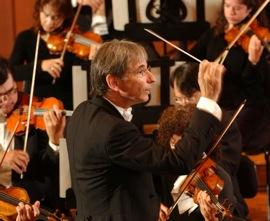 Quest for Fire at the S.F. Symphony

Johannes Brahms and Alban Berg, great Viennese masters, make a good pairing, and San Francisco Symphony brought them together for its Thanksgiving week concerts. The well-thought-out and well-executed program never quite caught fire Friday evening, for reasons difficult or impossible to determine. It might have been the chill draft blowing through Davies Symphony Hall, the traffic that delayed some of the musicians’ arrival (and thus the concert), or the effects of the intended 6:30 p.m. starting time.

The works of Brahms and Berg combine an intense and passionate surface with complex and often contrapuntal inner workings; similarly, both composers’ romantic lives had hidden aspects. Brahms never married and may have carried the torch for the great pianist Clara Schumann, widow of Robert, for some 40 years. Berg was involved in a decade-long affair with Hanna Fuchs-Robettin, sister of the novelist Franz Werfel, that ended only with Berg’s premature death in 1935. That affair gave rise to Berg’s six-movement Lyric Suite for string quartet, which, the composer George Perle discovered in 1977, is embedded with references to Fuchs-Robettin and their love affair. Written in 1925, the Lyric Suite was premiered by the Kolisch Quartet and played by them in both its full version and a short version, jokingly called by them the “salon arrangement.” Berg’s publisher encouraged the composer to create a string orchestra arrangement of the short version, and in 1928, the composer did.

It was this version than the symphony played this week. As is sometimes his wont, at the Friday performance, Michael Tilson Thomas took up the microphone as well as the baton to explain the piece, with remarks about music, the human heart, and Freud.

It’s doubtful whether he needed to, for though the Three Pieces from the Lyric Suite are atonal and written using 12-tone (serialist) compositional techniques, Berg is the most accessible and emotionally direct of serial composers. It’s also not terribly important, though it’s certainly interesting, to know the story of the Berg/Fuchs-Robettin affair. The interconnections among the movements are perfectly audible, including the recurring four-note fragment from which Berg generates the suite’s 12-tone row.

There are both gains and losses in the string orchestra version. That version, performed in such a large hall and with so many players, loses the intimacy of the quartet version, without the corresponding gain of the additional colors that winds and brass would provide, yet the great complement of strings adds its own tonal depth. The symphony gave a polished and passionate performance of the Three Pieces, catching well the turmoil above and below the surface of the music. The buzzing, Bartókian opening of the second movement and the emotionally unmoored third movement were especially memorable, as were the sinister trills in the latter and the beautiful solo playing by Concertmaster Alexander Barantschik and other string soloists in the first movement.

Brahms’ Piano Concerto No. 1 in D Minor, written over several years and premiered when the composer was 25, was a notorious failure at its first performance. Even in a time when the piece is an accepted masterpiece and a firm member of the canon of 19th-century concertos, it’s easy to hear why that first audience reacted as it did: The first movement, especially, is sprawling, discursive, and formally both complex and somewhat messy. The great music writer Sir Donald Francis Tovey speaks of “titanic struggles,” and beyond the struggles inherent in the music, and presumably Brahms’ psyche, it’s an awkward and difficult concerto to perform.

Tilson Thomas and guest pianist Yefim Bronfman achieved something between a draw and a win, with a performance that was often beautiful without quite achieving transcendence. The orchestra played well, and there were no obvious mishaps or problems, but oddly the performance lacked some essential tension and drive, without being loose or sloppy: A solid, professional performance that on another night might have hit greatness.

Owing to the scoring, some acoustical quirk of Davies, or perhaps to miscalculated balances, the piano was not nearly as audible from my seat during the first movement as during the subsequent movements. Still, Bronfman’s playing had complete musical and technical command through every note of this extremely difficult score. Just as impressive were his beautiful tone, and a natural sense of rhythmic flexibility that gave his playing the kind of give and take you wish for, but don’t always get, in Brahms. Best of all was his tender, crystalline account of the slow movement cadenza, truly a time-stands-still moment in the performance, which was followed by a grandly fierce attack on the recurring main theme of the last movement.