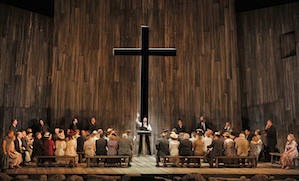 The Druid priests and priestesses of San Francisco Opera’s season-opening Norma gave way to a sanctimonious Christian preacher and his 1930s Tennessee flock with the long-overdue company premiere of Carlisle Floyd’s Susannah on Saturday night. The two operas offered back-to-back depictions of religion’s vice grip on the faithful, an ominously timely topic in 2014.

In Floyd’s American tragedy, based on the Biblical story of Susanna and the Elders, the believers’ power bears down on an exuberant 19-year-old (Patricia Racette) who is caught bathing nude, by a group of outraged elders who take a long look, in the creek near her house one day. Abused by the townsfolk and then more deeply by the toxic and repellently named Rev. Olin Blitch (Raymond Aceto), Susannah sinks into depression and despair and finally retreats into a broken, woman-against-the-world defiance.

Carlisle’s widely performed 1958 work is writ large in every sense. With a score that draws on Appalachian folk tunes and church hymns, soars into rapturous lyricism and underlines evil in clearly drawn thick lines, Susannah may well strike some listeners as naive, quaint or simplistic. The characters, in the composer’s libretto, are crafted with forthright strokes. There’s a town drunk, a half-idiot boy, a billboard-scale hypocrite and all those God-fearing, life-loathing residents of (cue the irony) New Hope Valley, Tennessee. The local-color dialogue, both sung and spoken, can sound self-consciously “regional” at times.

Check whatever resistance you might have to all this at the door. In a beautifully mounted production that sets off another great performance by the beloved soprano Racette, Susannah offers an ardent, anguished, and moving experience.

Affirmation of that comes early on. Home from a square dance where the cut of her bright blue dress and the liveliness of her step has earned disapproving notice from the town gossips, Susannah casts her gaze to the night sky. “Ain’t it a pretty night?” she muses. On a gorgeously stark set (by Erhard Rom), wonderfully limned by Gary Marder’s lighting and ravishing projections, the stars gleam, in Susannah eyes, as diamonds stitched into a velvet blanket.

The wonder of the scene is the way the heroine’s mind wanders not just to the heavens but to an earthly paradise “just like you see in the mail order catalogues.” As Carlisle’s melody soars achingly, you feel both Susannah’s aspiration and her entrapment, the reach of her dreams and the confining boundaries of those beautiful deep purple Tennessee mountains. When her alcoholic brother, Sam, appears (a firm-voiced and tender performance by tenor Brandon Jovanovich), Susannah begs him to sing a favorite song. Their mutual delight is both infectious and sad, as ostracized brother and sister collapse under a sky that’s begun to lose its luster.

Director Michael Cavanagh and his design team create one striking and often subtle effect after another. Tormented by his own failings, Rev. Blitch stares up at a glaring white cross on the wall, then watches in bafflement as the projected image of the cross slowly vanishes on the floor at his feet. His path of righteousness is lost. Marder’s front lighting of a revival meeting projects the flickering, black-ghost shadows of the faithful on the wall. Michael Yeargan’s fine period costumes suddenly look like stiff confinement under this cold revealing light.

Racette was the shining center of it all. It might take some suspension of disbelief to buy a singer nearing 50 as a teenager in such a naturalistic piece, but she inhabited the role at the opening in a total, transformative way. Gamboling along a rocky downstage path with her friend Little Bat (an expert, twitchy performance by tenor and company newcomer James Kryshak), she bubbled over with a pure love of life. Racette’s Susannah grew more faceted throughout, from her heartsick account of the aria “The trees on the mountain” to her hardening resolve at the end. Aceto, whose bass baritone lacked heft on opening night, acted his crucial scene with Racette with oily precision.

Susannah lags some after intermission, as the crisp short scenes of the first act give way to a more deliberate and deliberative working out of the inevitable. Floyd’s tendency to illustrate and track every detail, from the shimmering water in the fated creek to the tumescent pulse beat of lust, wears a bit. That said, conductor Karen Kamensek, in her San Francisco Opera debut, elicited a range of bright and richly shaded orchestral color.

Whatever one’s misgivings about it may be, Susannah matters. The composer, who was in attendance on opening night and received a warm ovation when he came onstage during the curtain calls, has written a work with enduring resonance about Americans’ suspicion of their neighbors. At the time of its premiere in the late 1950s, the opera was viewed in the context of the McCarthyite witch hunt for Communists. Today it summons thoughts of how immigrants and other “outsiders” are vilified and feared.