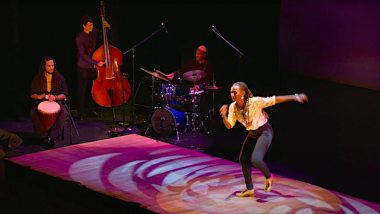 And now for a little improv, dear dancewatcher. Hasten to YouTube, where you can pull up three diverse solos created by Black choreographers, creating in total a free and wonderful hour not, as they say, available in stores.

These solos, created for the screen by Dormeisha, Kyle Abraham, and Jamar Roberts, were commissioned from the three choreographers last fall by City Center — or more formally, the New York City Center of Music and Drama. They were part of its new, all-digital Fall for Dance festival, necessitated when the wildly popular festival, annually SRO at the huge dance venue on West 55th Street, met with the wildly unpopular pandemic. City Center has re-presented them as part of Black History Month, and they’re available through Friday, March 5. (You can also view them on the City Center’s website.)

Golden tap shoes adorned the feet of Dormeshia (who, like Adele or Prince, needs no surname to be known to the legions who love her — but it’s Sumbry-Edwards) as she moved along the crisply miked floor, trading riffs and rhythms with her fine trio (bass, djembe, and drums; Noah Garabedian, Gabriel Roxbury, and Winard Harper, respectively). Her shoes and gold shirt glittered magically through Lady Swings the Blues, a compendium of what she calls improvography and what I’d call wizardry.

Dormeshia can squeeze a dozen taps out of one beat, heel or toe. Or if you want both, she can travel sidewise on her heel then toe, then heel, then toe, and onward. She can slam, she can run through all the things one would hope to master without breaking a sweat — the pullbacks, the pivots, the adagio, the allegro, the patter of perpetual feet, with an occasional tantalizing and perfectly timed, teasing pause. Dormeshia aims to pay tribute to the anonymous generations of Black women tap dancers who have contributed so much to the art form. Now, ever so musically, Dormeshia carries it swingingly forward.

The choreographer Kyle Abraham, whose company, A.I.M (Abraham in Motion) and artistry has garnered widespread tours and grants, created a compelling solo for the American Ballet Theatre principal dancer Calvin Royal III.His piece, to be seen — an enigmatic title if ever there was one — is set to Ravel’s Bolero. It begins with Royal walking onstage in white — the top a hoody sweatshirt. When he takes off the sweatshirt he begins to dance and never stops. The solo fuses contemporary dance and half-memories; Royal is a marvelous ballet dancer (perhaps garnering the most press coverage for his and Misty Copeland’s partnership in ABT’s Swan Lake) and Abraham alludes to swans, fluttering, flying, and dying, as well as myriad steps from the classical vocabulary that look so graceful with Royal’s endless arms and legs, his superb buoyancy. But it doesn’t stop there. Nobody can be a swan all the time; there are slouches, playful leaps, insouciant Astairean skips, involutions of the knees, and, as Ravel accelerates, fusillades of shimmering turns. Whatever’s next from Abraham and Royal remains to be seen, hopefully soon.

Jamar Roberts, the resident choreographer of Alvin Ailey American Dance Theater, where he’s still dancing, created his solo, Morani/Mungu (Black Warrior/Black God). Beautifully performed and wrenchingly emotional, it opens with a voiceover of “Black Is” by The Last Poets, moves on to John Coltrane’s “The Drum Thing,” and ends with Nina Simone’s piano rendition of “You’ll Never Walk Alone.” Roberts, strong and sinuous, excels at floorwork, but is equally compelling when he rises, extending into strong and steady one-footed turns. His dancing expresses power and sorrow, determination and weariness, underscored by the words and music he has chosen. As with his masterly Members Don’t Get Weary, created for the Ailey company, Roberts’s artistry allows us to grieve but also to hope at this conclusion of Black History Month.

All Together Now: Films.Dance Paves Paths of Interweaving Creativity

Making the Most of the Pause for the Black Dancer

Choreographer Robert Moses and Denise Saunders Thompson, of the International Association of Blacks in Dance, discuss increasing Black influence and the added challenges of the pandemic.