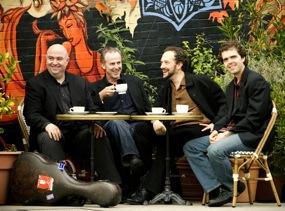 The Los Angeles Guitar Quartet brought charisma and virtuosity to a program of mostly Renaissance music (bookended by 19th-century opera arrangements and leavened by a modern classic) at a recital presented on Saturday at San Francisco’s Herbst Theatre by the Omni Foundation for the Performing Arts and San Francisco Performances.

The lute revival of recent decades has unfortunately led many guitarists to eliminate Renaissance music from their repertoires, so it was refreshing to hear three contemporary suites based on Renaissance compositions. The most substantial (and most faithful to the original works) was Music from the Time of Cervantes, a set of eleven pieces from the Spanish Renaissance. Arranged for guitar quartet by William Kanengiser, originally to accompany a recitation of excerpts from Miguel de Cervantes’ Don Quixote by British actor John Cleese of Monty Python fame, the set works well in its purely instrumental version. John Dearman elegantly captured the folkloric nature of Luys Narvaez’ Guardame las Vacas (Watch my cows), probably the first printed variation form in music history.

Alonso Mudarra’s well-known Fantasia Que Contrahaze La Harpa en la Manera de Ludovico was arranged to evoke a ballad sung to Don Quixote interrupted by a practical joke involving cats and cowbells. Juan Arañes’s Chacona brilliantly illustrated the raucous origins of a form usually associated with the noble and profound. The arrangements showcased the LAGQ’s ability to blend folkloric, popular and classical styles. It would be delightful to hear the complete theatrical version in a future performance.

Peter Warlock’s Capriol Suite, though written in 1926, is based on music from sixteenth-century France. As in Stravinsky’s Pulcinella — also based on earlier music — the settings initially hardly hint that there's a twentieth-century composer involved, but by the final movement the harmonies have a decidedly piquant and modern flavor. Kanengiser’s arrangement of Warlock’s string-orchestra version for guitar quartet uses plucked string sonorities to evoke the world of the Renaissance lute.

Set all inhibitions aside

Ian Krouse’s Antique Suite is a delightfully uninhibited recomposition of music originally written by German Renaissance lutenist Hans Neusidler. The performance began with Kanengiser bowing his guitar to evoke the drone of a hurdy-gurdy; the piece intentionally includes an early-20th-century transcription error that led scholars to believe one of Neusidler’s pieces was the first example of bitonality in music history, and ends with an unexpected quote from Bach’s Third Brandenburg Concerto in homage to a Romero Guitar Quartet performance that had inspired Krouse.

The program began and ended with arrangements of nineteenth-century opera themes. Giacomo Rossini’s Overture to The Barber of Seville was brilliantly arranged by John Dearman to highlight each member of the quartet, and provided a delightful introduction to the evening. A suite from Georges Bizet’s Carmen revived the Spanish flavor of the Cervantes set and gave the audience a chance to savor Scott Tennant’s stylish rasgueado.

Leo Brouwer’s Paisaje Cubano con Lluvia (Cuban Landscape with Rain) was a welcome reminder that the LAGQ has a substantial modern repertoire. A minimalist evocation of a rainstorm, it begins with sparse, irregularly timed notes portraying occasional raindrops, builds in intensity, includes an aleatoric hailstorm, and then gradually recedes. It calls for, especially in the hailstorm, a finely paced and sensitive musicianship (an LAGQ specialty).

Igor Stravinsky’s Circus Polka, written to accompany a ballet by George Balanchine for 50 elephants and fifty ballerinas to perform for the Ringling Bros. and Barnum and Bailey Circus, was offered as a droll encore.