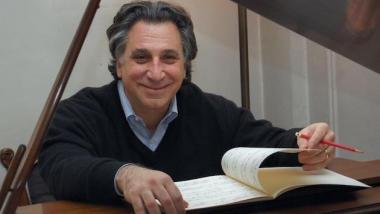 Richard Danielpour Finds His Voice in The Passion of Yeshua

Lots of composers, filmmakers, painters, and writers have had their say on the last days of Jesus  — some, like J.S. Bach, multiple times. To this long, long line we can add the name Richard Danielpour, a Jewish-American composer with Iranian-born parents who has written his own evening-length The Passion of Yeshua — first heard at the Oregon Bach Festival in July 2018 and recorded live in Buffalo the following April for a Naxos double-CD set released last year (reviewed here from a stream).

The question for one listener satiated with passions is, does the world really need another? Well, this one is different, Danielpour says, because with his mixed heritage in mind, he wants to clear away centuries of accumulated dogma and yes, atrocities committed in his name in order to understand who the real Jesus was. He goes back to original Hebrew scriptures for some of the text, sung in Hebrew — thus, Jesus is Yeshua, the two Marys are each named Miryam, and so forth — and there is alternating text drawn from the four Gospels that is sung in English.

As in Danielpour’s earlier large-scale choral work, a “peace oratorio” called Toward a Season of Peace, The Passion of Yeshua is easy on a general audience’s ears — mostly in an attractive American Romantic style, if with understandably fewer moments of American flamboyance. Again, Danielpour proves to be a solid craftsman, responsive to the text in sometimes literal ways — like when the Narrator’s words “Sorrowful and troubled” bring on a predictably agonized musical response, and the word “sleeping” finds the rising/falling wordless chorus imitating the slumbering Talmudim.

Much of Part One is in a reflective mood; a very pretty aria with a stately rhythm for mezzo-soprano, “In You, Lord, I Take Refuge,” being the standout number. However, “All We Like Sheep” suddenly awakens the end of Part One with a blast of Hebraic modes and syncopated choral exuberance. Danielpour seems to be pouring on the Bernstein here, as he did in Season Of Peace, and will do so again briefly in some choral harmonies deep within Part Two. While Danielpour’s original inspiration for this oratorio was Bach’s St. Matthew Passion, he saves that contrapuntal homage for the Epilogue at the end of Part Two. Otherwise, one doesn’t have to play name-that-influence very much — which is good, for Danielpour has gone further in this piece than in the earlier oratorio toward synthesizing a voice of his own.

The Buffalo Philharmonic under JoAnn Falletta, who also led the Oregon world premiere, sounds terrific here. Familiar to Southern Californian listeners from her years at the Long Beach Symphony before decamping to the East Coast, Falletta preceded Marin Alsop as the first woman to be music director of a major American orchestra (Buffalo) and doesn’t often get the credit. There are two more SoCal credits: Danielpour teaches at UCLA, and the UCLA Chamber Singers join the Buffalo Philharmonic Chorus. Among the solo voices — all of whom display crystal clear diction in English — are soprano Hila Plitmann, a fearless explorer of new music, in fine silvery form, J’Nai Bridges’s rich, darkish mezzo-soprano with alto coloring, and baritone Kenneth Overton as a sometimes tough, often compassionate Yeshua. Although the 103-minute piece could use a bit of a trim in Part Two, the Buffalo forces make an admirable case for the whole thing.

A massive undertaking for the university choir, Richard Danielpour’s score sings of compassion and forgiveness.

The composer’s Eleven Bagatelles for the Piano, performed by pianist Inna Faliks, has brilliant parts but no through line.