Russian Piano Music From the Silver Age and Beyond

Pianist Daniil Trifonov evidently likes concept albums, and that fits in with the common practice among today’s classical labels of coming up with umbrella titles instead of simply listing the works at hand.

He did one called Evocations that was anchored by the Chopin piano concertos and filled out with spinoff variations on, and tributes to, Chopin by others. Another project, Destination Rachmaninoff, featured all of the latter’s piano concertos. The latest one is a compendium of music by Scriabin, Stravinsky, and Prokofiev called Silver Age (Deutsche Grammophon), referring to a slice of Russian cultural history from the late 19th century until the Bolshevik Revolution of 1917. 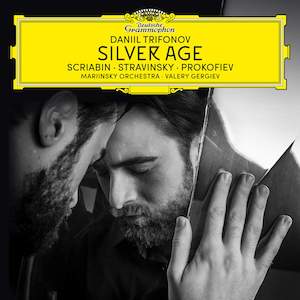 A “silver age” is defined as a sequel to, and of lesser importance than, the “golden age” before it. But it doesn’t make sense to me that a period of music which included the likes of Scriabin, Stravinsky, and Prokofiev (not to mention Rachmaninoff) is of lesser importance than the Russian “Golden Age” whose inhabitants included Glinka, Tchaikovsky, and the Mighty Five (Mussorgsky, Rimsky-Korsakov, Borodin, Balakirev, Cui).

Trifonov believes that all three of his Silver Age composers aimed to unify the arts in a post-Wagner, Russian-style gesamkunstwerk (integrated work of art) based on the holistic example of Diaghilev’s Ballet Russes, but in different media — Scriabin in a mystical concert experience drenched in colors, Stravinsky through ballet, and Prokofiev ultimately in film. Obviously, none of that occurs here in an audio-only program of solo piano music and two piano concertos attuned very much to the priorities of a virtuoso pianist. Nevertheless, Trifonov’s selections are very interesting and enterprising, if peculiarly sequenced.

The two-CD set actually begins with something outside the Silver Age timeframe, Stravinsky’s not-very-inspired Serenade in A (1925). Except for a characterful race through the Rondoletto at the composer’s tempo, Trifonov doesn’t make it more than a series of disconnected gestures. In Three Movements from Petrushka — excerpts from the ballet transcribed for Arthur Rubinstein (who, alas, never recorded it) — Trifonov gets off to a dynamic start in the “Danse Russe,” yet the rest is spotty, with hardly any drive at all in the great repetitive dance down the stretch. An arrangement for piano of the last three numbers of the Firebird Suite is most valuable for revealing a striking kinship to Mussorgsky’s famous “The Great Gate of Kiev” in its big bonging chords.

Prokofiev gets the lion’s share of attention — and best performances — in the set, starting with the Sarcasms from his bad-boy 20s containing lots of percussive stabbing, discords, and favorite speed indications like Precipitato (rushed or hurried) and even Precipitosissimo (though Trifonov doesn’t go that fast). The barnstorming Piano Concerto No. 2, written around the same time as Sarcasms, is the album’s centerpiece — and here Trifonov is joined by Valery Gergiev and his Mariinsky Orchestra at their best, reveling in massive eruptions, seething buzzing Russian brasses, and transparent lightly-painted detail. Trifonov fits into the Mariinsky sound world like a glove, and handles the big first movement cadenza, as well as the Piano Sonata No. 8 — another out-of-period choice, this time from World War II — with equal servings of musicality and power. An ironic little Gavotte from Cinderella tops off the Prokofiev portion.

Scriabin comes last, and he is curiously represented by his much-recorded but seldom-performed-live Piano Concerto, which in its homages to Chopin on bended knee is hardly the music of the future that he would embark upon later. It is, however, a good showcase for Trifonov’s raindrop-like single notes, beautifully turned phrases, and tastefully controlled fluctuations in tune with a sympathetic Gergiev and the Mariinsky. It’s pleasing — if oddly retrograde — way to end this wide-ranging, well-recorded package of Russian musical history.