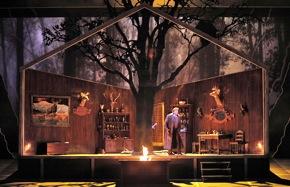 Die Walküre (The Valkyrie), the second opera of Richard Wagner’s Der Ring des Nibelungen, opened at San Francisco Opera on Thursday night with a thrilling, deeply moving performance that bodes extremely well for the full Ring to be presented in June 2011.

Donald Runnicles led the way on the musical side, with Francesca Zambello contributing acutely insightful direction and an effective physical production. Runnicles, back on the podium here for the first time since the end of his tenure as music director, has few peers today as a Wagner conductor, and this performance found him at his best. He swept from the storm that pursues the fugitive Siegmund to Wotan’s farewell with near-perfect pacing. Each act made a big, well-proportioned dramatic arc, and within each act every section, every phrase, and every tempo had an unfussy, organic, spontaneous rightness.

Crucially, this production is blessed with a strong cast that can execute almost everything that the conductor, director, and composer ask of them. Of particular interest among the singers are Nina Stemme, making her role debut as Brünnhilde, and Mark Delavan as Wotan, because both return next year for the full cycle. But I cannot emphasize strongly enough that the individual singers’ strengths and weaknesses are far less important than the fact that this opera comes together so brilliantly as a music-dramatic whole.

Stemme makes an athletic, youthful, and passionate Brünnhilde, vividly portraying the young goddess’ transformation and growth over the course of the opera, from something of an innocent wholly under her father’s sway to a maturing, independent individual with a greater understanding of the emotions that move humans. She sings with a dark and focused tone that’s richest in her middle and low registers and has an appealingly reedy edge. Her highest notes were a bit effortful and her trill, if any, was too recessed to be audible, but 99 percent of the role lies where she’s strongest, and she was mostly superb.

Delavan’s also a strong actor, and he was at his vocal best in the more intimate scenes of Acts 2 and 3. He has a sharp rhythmic sense that serves the text well. His Wotan was a god in decline, suffering and sometimes abject, as he yields to Fricka and sees the gods’ end coming. His interactions with Stemme’s Brünnhilde ranged from playful to dominant to touching. Sometimes his beefy baritone sounded splendid, but occasionally his upper register was foggy and covered, so that he lacked power at most of his biggest moments. His call to Loge at the very end opened up and had the necessary thrust, so we know that he has the capacity for more. Maybe the high pollen count Thursday got him, or perhaps he was pacing himself carefully through a long, demanding night.

Christopher Ventris and Eva-Marie Westbroek were a terrific pair of Wälsung twins, with Westbroek providing the greatest individual vocal thrills of the night. She has a beautiful soprano, full-bodied, soft-grained, utterly feminine, and with enormous, unforced volume when called for. Her vulnerable and womanly Sieglinde matched her voice well. Ventris has a lighter, more lyrical tenor than some of the great Siegmunds of the past, but if he trumpets less, he sings with a lovely legato, fine dynamic control, and a strong musical line.

Raymond Aceto’s Hunding was ideal: darkly menacing, domineering, strongly sung, even sexy at times. He’s sung several small roles here before, and, given the excellence of this performance, I hope we’ll see him in bigger parts.

The weakest link, mezzo-soprano Janina Baechle’s Fricka, was well-acted and acceptably sung, though her tone has a pronounced register break and something of that squeezed Slavic sound to it. Still, she put across the hurt and loving wife as much as the offended goddess of marriage, making three-dimensional a character who’s too often played as a one-dimensional shrew.

Zambello’s production follows most of Wagner’s stage directions, while placing the action somewhere in the 1920s or ’30s. Her gods and goddesses wear business suits and flowing formal wear; the Valkyries, aviator suits. Don’t expect a biplane to spirit Sieglinde off to the East in Act 3 (though the Valkyries do parachute onto their rock).

Hunding, Siegmund, and Sieglinde are casually dressed, with the latter’s turquoise day-dress providing a rare splash of costume color. Hunding’s hut is a small cottage built around an ash tree. It’s full of trophies and has deer’s heads on the walls.

The modern location and dress don’t provide any special insights into the action and character motivations; neither (mostly) do they get in the way of telling the story. The video rushing through redwoods during the prelude and later in the opera looks rather too much like the Ewok scenes in Star Wars, just as the video at the start of Das Rheingold must have made some, or many, audience members think “Space — the final frontier.” I appreciate that Wotan and Brünnhilde might have a playful relationship, but is it necessary for her to ride around on his back, even briefly? They are gods, after all, and they have their dignity, though cultural associations make it harder to look dignified in a business suit than in long, flowing robes. And does Hunding gain any power from having a gang accompany him and muscle Siegmund around in Act 2? I think not.

These quibbles aside, Zambello’s direction is very much on the mark, often startlingly so. Where Hunding and Sieglinde can be portrayed as completely adversarial, Zambello softens their interactions a bit by showing some physical attraction between them. Stemme’s Brünnhilde reacts with great surprise to Wotan’s statement that Erda is her mother. Wotan capitulates to Fricka’s demands with a signature, entirely appropriate for the god of contracts. Two dogs race across the rubble-strewn stage before Hunding’s entry late in Act 2 (they could be Hunding’s hunting hounds, or strays making do in a crumbling urban landscape). Wotan holds the dying Siegmund briefly before dispatching Hunding by breaking his neck.

Many scenes are staged with great power and beauty. When Hunding’s hut opens to reveal the spring in Act 1, we see a vast moon projected against the back of the stage. As the scene progresses, the moon sets, to be replaced by a spectacular sunrise: a perfect accompaniment to the gorgeous music.

The Annunciation of Death scene, in the second act, is one of the great highlights of the production. The desolate setting, Stemme’s sorrow, Ventris’ dignity and tender devotion to his beloved, and a slow procession of fallen heroes overwhelm us, while Runnicles and the orchestra achieve an otherworldly beauty of tone and pacing.

The third-act staging brings the expected dramatic climaxes. The Ride of the Valkyries is as exciting, and as thunderously played and sung, as you please, led by Valkyries Wendy Bryn Harmer, Tamara Wapinsky, Daveda Karanas, Suzanne Hendrix, Molly Fillmore, Maya Lahyani, Pamela Dillard, and Priti Gandhi. Sieglinde and Brünnhilde’s brief scene lifts the heart with the news of Sieglinde’s pregnancy, and then the closing scene breaks the heart. Brünnhilde sleeps, surrounding by a protecting wall of fire — and a great evening at the opera comes to a close.

All hail Donald Runnicles and his marvelous band of players, the singers, Francesca Zambello, Michael Yeargan for evocative sets, Catherine Zuber for the costumes, and Mark McCullough for the beautiful lighting. I can hardly wait for the full Ring cycle next year.