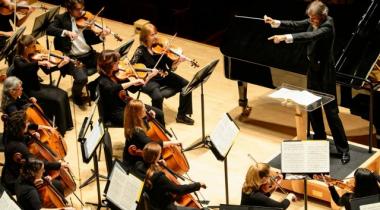 Santa Rosa Symphony concerts usually feature high-powered soloists imported from afar, but for their recent “Bring on the Strings” concert set, they stuck close to home, thrusting their principal violin, viola, and cello into the limelight. Violinist Joseph Edelberg and violist Elizabeth Prior shared the stage for a dazzling performance of Mozart’s much-loved Sinfonia Concertante.  Adelle-Akiko Kearns was the cello soloist for Gabriel Fauré’s rarely heard Élegie.

Edelberg and Prior could not be more different as players. He stands ramrod straight; she sways back and forth. He plays the notes as written; she injects a little rubato when given the opportunity. His tone is pure but restrained; hers is warm and flexible. Opposites, to be sure; but opposites attract. This was a duet of two distinctive voices that complemented each other instead of fighting.

The opening Allegro movement of the Sinfonia Concertante was delightfully brisk and well played, but there were occasional balance problems and some intonation lapses. The cadenza was invigorating and resulted in healthy applause — a welcome departure from tradition.

Balance problems disappeared in the gorgeously quiet slow movement. The orchestra stayed well back as Edelberg and Prior wove their intricately entwined lines to maximum effect. They tapped straight into Mozart’s tragic mode, eliciting profound emotion. In contrast, the closing Presto was light and buoyant, and the exchange of lines between the soloists was electrifying.

There’s usually a reason certain pieces are rarely heard, and such is the case with Fauré’s Élegie. The cello part is lovely, and it was lovingly played by Kearns, but the orchestration is often clunky, and the piece wanders. The balance problems were also more pronounced than in the Sinfonia Concertante, even though a stagehand installed a microphone in front of the cello stand. Kearns has great vibrato, and her tone is often luscious, but the orchestra, particularly in the softer passages, frequently overpowered her.

Kearns got a better chance to shine after intermission, when she played the frequent cello solos in Sibelius’s Symphony No. 4. After three lushly orchestrated, crowd-pleasing symphonies, Sibelius took a break with the fourth, opting for restraint instead of grandeur. The result is an austere masterwork suffused with contained energy that rarely breaks loose.

Conductor Bruno Ferrandis is well versed in Sibelius’s intricate musical architecture, and he pushed forward relentlessly, never letting the orchestra shy away from the symphony’s exacting demands. Orchestral crescendos came and went repeatedly without ever bursting forth into full-throated song. One got the sense of a volcano waiting to burst forth but constrained in its depth. The eruption finally occurred near the end of the Largo third movement, when the orchestra let loose with a remarkable unanimity of sound.

The performance of the final movement, with its resounding bells and sheer diversity of sounds, was a model of pinpoint dynamics and locomotive drive. Most remarkable were the last few dozen bars, when the orchestra seems headed to an ear-shattering conclusion but instead faded out elegantly, receding back into the depths.

Last, but not least, were the concert’s bookends: Alan Hovhaness’s Meditation for Orpheus, at the beginning, and Sibelius’s Finlandia, at the end. The Hovanhess offered an unusual array of orchestral colors, none more resplendent than when the basses plucked ad lib, creating a dense cluster of sound. The structure felt like a musical hot potato being passed back and forth between sections over a drone-like background. The piece is oddly static, but the sound is often memorable.

On the other end was Sibelius’s more-than-familiar Finlandia, a rousing finale seemingly inserted to counter the sotto voce ending of his fourth symphony. The playing was authoritative and the applause thunderous, causing a nearby patron to remark, “Now that’s an ending.”