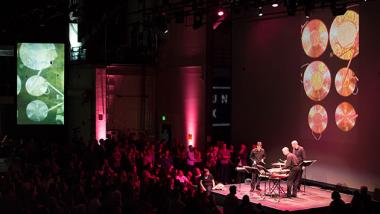 A man sitting alone on the stage, stark lighting projecting dual shadows on the screen behind him. Suddenly, his right hand darts upward, mimicking a turnkey gesture, a barrage of sound seemingly triggered by his movements.

For the ensuing ten minutes, percussionist, conductor, composer, and all-around music-man Steven Schick continued his tenure as an invisible puppeteer, miming a complex and unpredictable choreography to a pre-recorded and heavily manipulated tape of baritone Nicholas Isherwood’s vocal pyrotechnics.

The piece was Mark Applebaum’s Aphasia, and though some of its histrionics prompted chuckles from the audience, its underlying message—that of hindered, if not impossible communication—touched more somber and poignant notes.

Schick was among the highlights of the third SoundBox iteration, curated in collaboration with the San Francisco Symphony’s percussion section.

An incredibly dynamic soloist, Schick hovered like a hummingbird across a battery of Western and Asian cymbals in Lei Liang’s Trans, an evocative textural piece featuring a broad range of raindrop effects, which the audience was all too eager to provide by striking smooth pebbles together on Schick’s cue.

The far eastern atmosphere spilled over into Wenjing Guo’s Parade, performed by guest percussion trio Rootstock. The piece featured that most expressive of idiophones, the Chinese temple gong. These gongs produce a distinctive “bending” pitch when struck with sufficient force. Rootstock navigated complex textures using eight different specimens of these (four of which were stacked in upside-down pairs, creating an unstable yet resonant construct), while the resulting dance of wood, yarn, and metal was projected on the screens from a striking bird’s-eye perspective.

Earlier in the evening, S.F. Symphony principal percussionist Jacob Nissly had opened the concert with his arrangement of Steve Reich’s Electric Counterpoint for marimba, vibraphone, and pre-recorded tape parts. As every transcription should, this one offered a different viewpoint onto the electric guitar original; the timbre of the several mallet parts glowed and blended into a rich tapestry, at the expense, perhaps, of a degree of clarity in the polyphony. Cellist Sébastien Gingras joined Nissly for Osvaldo Golijov’s Mariel, a eulogy for marimba and cello and the most overtly melodic number of the night.

Rounding out the program was a quartet performance of Reich’s Clapping Music (a way for the audience to finally hear the entire piece, as opposed to the 20-second snippet that SoundBox uses to announce the start of each section of the program) and John Cage’s 1941 Third Construction, a seminal work in the percussion ensemble repertoire.

S.F. Symphony percussionists Raymond Froehlich, Tom Hemphill, Loren Mach, and Nissly struck everything from jawbone rattle to lion’s roar, from Aztec drums to tin cans in harnessing an incredible variety of sound within the dynamic, yet highly regimented architecture.

Unlike some of his later compositions, Cage’s works from this period are fully notated, relying on pre-determined “rhythm structures” made of nested units of the same length (what Cage called “square root form,” in this case employing 24 units of 24 measures each). The resulting form, however, is obfuscated by the surface activity, which relates to the underlying numerology in more complex ways, resulting in a listening experience that combines exuberance and complexity with a kind of deliberate rigor.

In terms of programming and the actual performances, SoundBox continued to please. The format, however, is not without faults.

For the amount of music it contained, last night’s concert was too long. I blame, once again, the dual intermission as well as the necessity to show up an hour early when doors open in order to secure a seat – both contributed to making the evening feel more than a bit drawn out.

And while the setting is both hip and attractive, the “hip” audience it attracts is often not respectfully quiet—which is a crying shame when music and musicians of this caliber are involved.