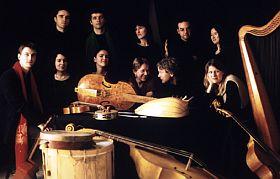 Lisa Hirsch on June 10, 2008
The Berkeley Festival and Exhibition, held in alternate years, typically features at least one program that's as much theater as music. In past years, the early music extravaganza had the horse ballet "Le carousel du roi" and the "Carnaval Baroque". This year, Le Poème Harmonique, which put on the Carnaval Baroque, returned with the premiere of "Monteverdi & Manelli: Venezia delle strade ai Pallazi," a semistaged performance of musical monologues (and duets, and trios) from 17th-century Venice. Presented by Cal Performances, this lively and entertaining program, heard on Thursday at the Zellerbach Playhouse, also included works by Marini, Ferrari, and the ubiquitous Anonymous. Le Poème Harmonique deployed 10 musicians for this intimate program: soprano Claire Lefilliâtre, tenors Serge Goubioud and Jan Van Elsacker, and bass Arnaud Marzorati; Olivia Centurioni on violin, Lucas Guimaraes on lirone and treble viol, Françoise Enock on violone, Jean-Luc Tamby on colascione (a plucked, fretted instrument) and Baroque guitar, Joël Grare on percussion, and the ensemble's director, Vincent Dumestre, on theorbo and Baroque guitar. Le Poème Harmonique observes both musical and theatrical practices of the 17th century, hence each piece on this program incorporated movements and gestures from the theater of that century, as well as music ornaments. In effect, we were seeing music as drama. Further, the group performed on a stage initially lit only by candles and the indirect glow of lights on the instrumentalists' music stands. The singers emerged from the gloom at the back of the stage to sing at center stage, flanked by a diagonal row of instrumentalists to each side. This arrangement gave the audience some sense of what musical and theatrical performances must have been like before electric lights, and allowed for a fine theatrical coup: at the start of the fourth number, Manelli's bergamasca titled La Barchetta passaggiera, a row of invisible candles stretching across the stage, mostly hidden from the audience's sight in what looked like an elongated, low prompter's box, burst into flame and added considerably to the available light. The flickering light resembled flames reflected on water, a most appropriate image for the bergamasca, an entertaining and extremely funny account of a wild night on a boat. The four singers impersonated passengers from Lombardy, Tuscany, Germany, Naples, France, and Spain, who cook their national dishes for each other and drink a great deal of wine, while the ship's cat merrily runs off with whatever food it can steal.

La Barchetta passaggiera provided the only comic moments on a program that otherwise consisted of romantic pining and laments for lost love. Monteverdi's famous Lamento della Ninfa received a frustrating performance from Claire Lefilliâtre, though the male trio commenting on the nymph's situation sang gorgeously. Lefilliâtre scooped into phrase beginnings far too often and started her solo at such a fevered emotional pitch that she had nowhere to go over the course of the lament. The piece would have worked better with more vocal poise and emotional restraint. Contrariwise, Van Elsacker opened the program with a beautiful and utterly poised account of Ulysses' awakening, from Act 1 of Monteverdi's Il ritorno de Ulisse in patria. And Lefilliâtre's intensely dramatic approach and dark-hued voice worked brilliantly in Benedetto Ferrari's Chi non sa com'amor (He who knows not how Love), a long, passionate meditation on love's sorrows, and in the composer's Son ruinato (I am ruined). The instrumental ensemble played discreetly throughout the evening, though with considerable flair. Violinist Centurioni came to the fore in Biaggio Marini's Sonata terza (Third sonata), which program notes confusingly described as a work for three violins. Only one violinist was onstage, so perhaps the remaining violin parts were distributed among the plucked strings. The balance of the 75-minute program was, by and large, charming and well-sung, though how charming you found the remaining musical numbers might depend on how you felt about the rather broad physical gestures used by the singers. The program closed with the jaunty Acceso mio core (My burning heart), proving that love's sorrows can bring forth music in many moods. Two encores followed, a repeat of Lamento della Ninfa no more satisfying than the first time through, and a cheery, unidentified piece played with all performers standing, the better to let them finally exit.