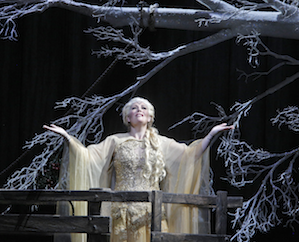 Opera season opening nights divide an audience’s attention before they ever begin. With all the focus on the dinners and dresses and donors, the opera itself can seem like just another, even secondary part of the festivities. It’s no wonder companies sometimes make safe, easy choices for the occasion.

No such charge can be leveled at San Francisco Opera, which opened its 92nd season at the War Memorial Opera House Friday with a brawny new co-production of Bellini’s bel canto masterpiece, Norma, and a powerhouse soprano, Sondra Radvanovsky, trailing a heralded New York reputation, in the title role. Musically, the evening was full of enough delights to make all the pomp and circumstance recede into the background.

Much of the singing by the principals was splendid, by turns potent, supple, extravagantly decorated and starkly emotional. The San Francisco Opera chorus made its customary fine showing. Music director Nicola Luisotti led a taut and keen-edged performance by the orchestra, even verging on the over-enthusiastic at times, when the balance with the singers and chorus went awry. As a cohesive and persuasive music drama, unfortunately, this often static and gloomy Norma disappointed. Both the design and direction registered as blunt and largely inert. It was a night to revel in vocal and orchestral splendor and be gratified and satisfied by that.

Radvanovsky, whose Metropolitan Opera performance as the Druid priestess earned glorious reviews and long ovations last Fall, made an immediately vivid impression here. With a diamond-bright voice that both sparkled and incised across the registers, the singer astonished. Volume and clarity were tightly bound. Her dramatic shifts to a pianissimo near-whisper came across just as forcefully in dramatic restraint. True, some coloratura details blurred or seemed overly deliberate. Her “Casta diva” prayer never quite took flight and trailed off uncertainly. But for fans of sheer vocal majesty and might, Radvanovsky’s Norma is not to be missed.

Impressive, too, was Jamie Barton, making her company debut as Norma’s rival in love and devoted sister in Druidical matters, Adalgisa. Her mezzo soprano had a caressing warmth on its own and married admirably to Radvanovsky’s more powerful instrument in their duets and ensembles. Traveling together in burnished, richly ornamented thirds, the women’s voices filled the house with floral, flowing lines.

Tenor Marco Berti sang with vigor and charisma as the Roman heartthrob Pollione, forbidden love-bait to both Norma and Adalgisa. His delivery had a raw, almost impatient urgency, a kind of onward-rushing drive that made his dangerous magnetism manifest. Even some missed notes reinforced the impression of uncontrollable passion. Bass baritone Christian Van Horn projected a steely authority as Norma’s father, the high priest Oroveso. The singer’s height and striking bald head underlined his dominance.

David Korins’ set design, for a co-production with the Canadian Opera Company of Toronto, Gran Teatre del Liceu in Barcelona and the Lyric Opera of Chicago, placed a monochrome gray frame around the action. Dominated by an enormous, cross-hinged door that evoked some sort of pre-Christian warehouse, the bleak wooden edifice was relieved now and then by glimpses of oddly artificial-looking white tree trunks when the door was opened partway. Everything looked anonymously primitive, from several wooden-wheeled wagons to the shed where Norma’s two children were secreted away. Jessica’s Jahn’s costumes provided splashes of color here and there, but also served to dislocate the action between ancient and quasi-modern times.

Director Kevin Newbury provided few animating sparks — at least until the showy funeral pyre, in the form of a giant white bull’s head, at the end (a director’s program note makes reference to the Burning Man Festival).

Newbury’s blocking was unimaginative and repetitive — Radvanovsky and Barton sang their two big duets in the same spot onstage and with the same posture. The chorus of priests, priestesses, and warrior milled around as if waiting for a train rather than a spiritual calling.

Radvanovsky, in one of opera’s most dramatically demanding roles, used her voice more effectively than her body. She acted too much with her hands and tended to strike poses — a grimace or a wilt — that lacked dynamic flow. The presence of her two capering children (the enchanting Oliver Kuntz and Miles Sperske) brought our a more natural sense of tenderness. But even in the moment when Norma considers killing the boys, there was something mannered in her anguish.

Not that any Norma has an easy time of making all the emotional shifts in Felice Romani’s libretto, based on a verse drama by Alexandre Soumet, come across. But even on a night when her singing may have faltered a bit, Radvanovsky created a Norma of deep, oceanic feelings. In the opera’s closing scene, she caught the heroine’s vanity and grief, her bravery and dread. Her voice glittered and menaced more fiercely than the knife she brandished at her lover. To a listener’s ears, she was Norma to the gripping, fragile core.