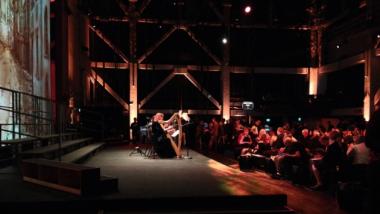 You’ve read the article before — in the Times, NPR, Slate, or any number of other publications — decrying all that’s supposedly wrong with classical music, from its concert halls (too stuffy) and programming (too conservative) to its audiences (too old). You may have also heard quoted the average age of the San Francisco Symphony patron: 64, compared with a city median age of 39.

The Symphony desperately wants to attract new — and younger — audience members, and in 2014, with Meyer Sound, it transformed one of its onsite rehearsal spaces into SoundBox, an experimental performance venue designed specifically for the benefit of these “culturally curious newcomers.” For the February 19–20 program, “Transcendent,” Ragnar Bohlin conducted the San Francisco Symphony Chorus accompanied, in several works, by a small group of S.F. Symphony instrumentalists.

SoundBox brands itself as more of an experience than a concert: The graphically stunning website plugs the drinks as much as it features the San Francisco Symphony name, and it doesn’t provide program details well in advance. I came to SoundBox expecting a smattering of audience-friendly film music and light minimalism, but was pleasantly surprised to find that musical considerations weren’t secondary to the “Transcendent” program, a stylistic smorgasbord of works spanning almost a thousand years.

In an evening designed to make classical music more hip, Hildegard von Bingen isn’t an obvious choice. Her music, among the oldest works conservatory students typically study, comes from a time and place foreign to our own; the sequence performed, Columba aspexit (The dove peered in), exalts St. Maximinus, a figure few can probably name. The women sang the florid lines with impressive coordination, considering the number of doubling voices as well as Bingen’s lack of rhythmic indications, and the men’s drones pleasantly enveloped the audience.

But in the space, Bingen’s music came alive. The women sang the florid lines with impressive coordination, considering the number of doubling voices as well as Bingen’s lack of rhythmic indications, and the men’s drones pleasantly enveloped the audience.

Less successful was Monteverdi’s “Ardo avvampo mi struggo” ("I burn, I blaze, I am consumed”). Precision is necessary to bring out the vivid imagery and humor of Monteverdi’s madrigals, but most of the consonants were lost, making the performance sound much less focused than it visually appeared. Perhaps Meyer Sound’s Constellation system, which adapts its acoustic configurations to suit different styles, needed an adjustment here.

The chorus moved without pause from Monteverdi into Mahler’s “Die zwei blauen Augen von meinem Schatz” from Songs of a Wayfarer. Mahler is another less-than-obvious choice for an evening designed to attract new patrons: To non-specialists — and, truth be told, to a number of specialists — his symphonies are primarily known for their length and density, his poetic edits for their exaggerated fervor.

But this song and “Ich bin der Welt abhanden gekommen” from Rückert Lieder — bold choices in theory — became, in unaccompanied choral arrangements by Clytus Gottwald, Mahler-lite. Sung en masse, many of the songs’ quiet moments were obliterated, the rhythms regular and phrasings predictable. Even a modest orchestration using the instrumentalists still sitting onstage would have exponentially increased the performance’s expressive range.

Thankfully, the orchestral musicians joined in for the meatiest work of the evening, Arvo Pärt’s Te Deum. With only a few players on each part, the group maintained a flexibility characteristic of chamber playing, yet also harnessed considerable power, when necessary. Aside from some wavering pitches in the sopranos’ exposed high entrances, the choir sounded magnificent here. The audience remained near-silently engrossed throughout the 30 minute-long work, by far the longest piece of the evening, and applauded with much enthusiasm.

Returning to the question of relevancy: Did SoundBox attract a new set? Yes, if only in one respect: Most of the audience members were under 50 (the section reserved for wheelchair users remained empty — hardly a cause for celebration). Although the event tends to sell out within hours, ticket prices are reasonable, as are the regular Symphony season’s center terrace and student tickets (cocktails are another story). Standing in the block-long line prior to the doors opening, I saw many people arrive via Uber and Lyft.

Video projections included English translations of all the texts — always appreciated — and the pre-show’s improbable pairing of acoustic renaissance music (Margaret Davis and Kristoph Klover) with live blacksmithing was entertaining, if a bit odd. I would have preferred more music in this two-hour show, but then again, I wasn’t the target audience and still enjoyed the event — and, toward the end of the night, I recognized a Symphony second violinist in the audience (presumably having walked over from playing Prokofiev’s Cinderella), doing the same.