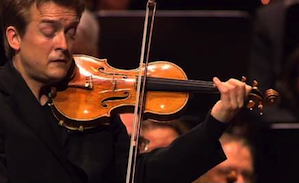 The program said it was a Bartók’s Second Concerto, but for violinist Christian Tetzlaff, a committed and hungry lion, it was red meat. The music’s passion and ferocity, composed in a Europe victimized by fascism, could not have enjoyed stronger advocates than the Hamburg-born soloist along with Music Director Michael Tilson Thomas Wednesday night. Unfortunately, although a short Sibelius curtain-raiser was a treat, the after-intermission Brahms’ Fourth was less exceptional.

From moments of tender lyricism and spooky sound sculpturing to the far-more-common strident militancies, orchestral outbursts, and thrilling virtuoso expostulations, the Tetzlaff-Tilson-Thomas axis held the Davies Symphony Hall patrons in thrall. While he could produce the most tender sounds on pitch with gorgeous tone, Tetzlaff was not afraid to go all out in his wide dynamic range — even to a slight but context-justified scrapiness in the most aggressive utterances. Purity of tone would sound misplaced amid such violence. While some may claim sound is all that is necessary for a performer, I was thrilled by his body language: eyes closed so as to seem completely immersed in his art, brows furrowed as he champed into the most protein-rich passages of the Bartók diet. Tetzlaff is a poster child for why classical music should be experienced with the eyes and not just the ears.

MTT was no slouch either when it came to gestural gambits. At the climax of Brahms’ first movement for example, he came up with a trick that forced a chuckle of surprise out of me. When a motive played first at one side of the orchestra and then the other, he flipped his entire profile from right to left so suddenly I felt like I was pressing Control-Z on a Photoshop application. Perhaps inspired by spikey aspects of the Bartók composition, MTT chose, with salutary effect, to emphasize Brahms’ accents, especially in the third movement.

Although the audience was well pleased judging from their response at the conclusion of the symphony, I was disappointed with some of MTT’s tempo choices: too slow in the second movement, too fast at the beginning of the fourth movement, and too slow for the long flute solo in the middle of the finale. Throughout the concert, except for a minor horn flub in the Brahms second movement, the Symphony players were at their usual world-class level.

If there’s one concert tradition that I treasure, and experience less commonly than I’d like, it’s short warm-up numbers. Lemminkäinen’s Return, the fourth of Sibelius’ Legends from the Kalevala, was a splendid choice for this role. Six minutes long, energetic, tuneful, and charmingly orchestrated, it provided a pleasing contrast, in retrospect, for what was to follow.

I was thrilled by his body language ... Tetzlaff is a poster child for why classical music should be experienced with the eyes and not just the ears.

Another concert tradition I enjoy is program notes. I commend the Symphony for providing multiple authors’ views for this and other concerts, in this case contributions from Thomas May, the late great Michael Steinberg, and Larry Rothe. Even today, I continue to contemplate material in Rothe’s opening paragraph on the Brahms, finding its brain-teasing beauty undiminished:

To those unafraid of the past, those who believe that regret can be as much stimulus as burden, and that life’s beauty is a gift not diminished by its incomprehensibility, Brahms continues to speak his carefully chosen language, at once expansive and blunt, with special eloquence.