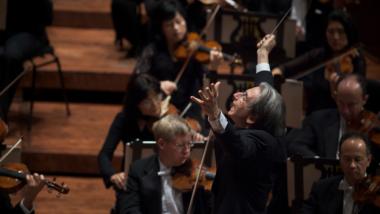 It would have been longer.

So said Michael Tilson Thomas, of the famed all-Beethoven Akademie Concert of December 22, 1808, before leading the San Francisco Symphony and assorted guests through a four-and-a-half-hour recreation of that mammoth event.  So what was the audience at Davies Symphony Hall missing on Saturday night, in an evening that seemed to have everything?  A more-or-less deaf Beethoven himself improvising at the keyboard for up to an hour.

Not that anyone went away short-changed.  In a program spaced out with three intermissions, listeners experienced the bliss and bombast, the audacity and ethereal uplift, the angularity and elegance that watermark this composer’s output.  While no single program – or for that matter the Symphony’s own ongoing three-week Beethoven Festival – could encompass him, this so-called “marathon” made a heroic, perhaps inevitably flawed effort.

In addition to a vital and raw-boned reading of the Fifth Symphony and a tamely domesticated account of the Sixth, there was some glorious singing by soprano Karita Mattila (in Ah! perfido) and the San Francisco Symphony Chorus (in three extracts from the Mass in C Major) and a triple-helping of the greatly gifted and insightful pianist Jonathan Biss.

The two symphonies, both of which (remarkably enough) premiered at the 1808 Vienna concert, formed the tent poles of the evening.  The programmatic “Pastoral” came first, emerging as more of a drawing than a richly painted landscape.

The C Minor Symphony No. 5 stood alone, deservedly, between the second and third intermissions.  Driven by brawny horns and pungent woodwinds, the opening Allegro took on an edgy, internal tension.  MTT and his band built from there, informing the fugue passages and exultant outbursts in the subsequent movements with a volatile charge.  There were a few stumbles through some tricky rhythmic footwork, as if from a kind of impatience to reach the concussive, pressure-releasing final bars.

Tall and statuesque, with dramatically large features, full-body expressiveness and a complex, resonant voice to match, Mattila tore into Beethoven’s 1796 monodrama of a lover’s fury, forgiveness, and a plea for pity.  It was an absorbing full immersion in sexual passion, with the orchestra in sync with Mattila’s sonorous, snarling, coruscating Ah! perfido.

Biss sent an early message, with a gorgeously tender opening solo in the Piano Concerto No. 4, that he had much to say. And so he did, using his crystalline passagework, poignant phrasing, uncanny articulation of left-hand figures, and murmurous trills to revelatory effect.  The second movement, with its sometimes hackneyed tame-the-orchestra storyline, was especially fine.  Biss never asserted himself or preened; he made purity of expression the piano’s irresistible force.  The Rondo was a feathery, wind-blown dance with the orchestra

Biss returned for a bravura assault on the amusing if overgrown thickets of the solo Piano Fantasy in G Minor.  He gave everything from clattering runs to sober chorales and stride piano frippery full weight, climaxing the feat with a set of urgently voiced variations.  Biss somehow made all the excess matter.  He stayed at his post for the piano flourishes of the evening’s even more gaudily fantastic closer, the Choral Fantasy, composed for the composer’s big 1808 night. Pulling out more deep-throated sound from the Steinway than he had all night, Biss aimed for the rafters.  Everyone came along for the ride – orchestra, six soloists and the chorus, ringing out their “Ode to Joy”-like praise song of love and art.

Four of those soloists – soprano Nikki Enfield, mezzo Abigail Nims, standout tenor Nicholas Phan, and bass-baritone Shenyang – were on hand for the Mass segments, performed in two separate spots on the program. As well-delivered as those solo contributions were, director Ragnar Bohlin’s superb San Francisco Symphony Chorus shone most brightly.  Singing as one, with a luminous glow throughout, they illuminated yet another aspect of Beethoven’s genius: his seemingly direct connection to the divine.

MTT, at the outset of the evening, hit on one more historical point of interest.  The Akademie Concert, he said with a slight ironic tilt, was not reviewed.  That’s one thing neither the masterbuilder Beethoven nor the San Francisco Symphony music director could control.