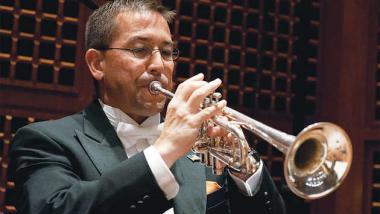 It was the little things that counted Sunday afternoon, when a group of musicians from the San Francisco Symphony gathered at Davies Hall for another chapter of the organization’s chamber music series. With two short, choice pieces at the top of the bill — neither of them likely to be known by the audience in advance — the program affirmed the mind- and music-expanding value of these concerts. What came later, Janáček’s Mĺadí (Youth) for wind sextet and Tchaikovsky’s string sextet Op. 70, Souvenir de Florence, provided more ample and extensively developed pleasures. But for this listener, the two brief curtain raisers lingered.

Scored for solo trumpet and percussion, Heptade takes its name from the seven-movement structure of this late work by the Frenchman André Jolivet (1905–74), a musical polymath whose interests ranged from ancient instruments to atonality to the Ravel-inflected theater music he composed early in his career.

In the three movements trumpeter Mark Inouye and percussionist Jacob Nissly performed with sensitivity and elan, an eclectic, culture-spanning sensibility, and lively sense of humor emerged. With its gliding, busy trumpet figures and snare-drum riffs, the Allegro had a jaunty, insouciant air. In a beguiling blend of Japanese woodblock concision and the jazz singer suavity of Inouye’s muted, wistful tune, the Cantante opened with silken ease. Nissly used his brushes to caress various drums and cymbals. The trumpet lingered on a sweet, sustained high note.

Bongos and glass chimes gave the Veemente an Afro-Cuban slant. More playful than vehement, as the marking would have it, the movement skittered and capered through an echoing conversation. Nissly let out a few chirps on a whistle. Inouye used his hand on the trumpet’s bell for a few wah-wah effects. Like the other two movements, this one ended with a kind of ironic shrug. Ten minutes served up a tantalizing but satisfying taste of Jolivet’s charm and range.

As the stagehands trundled the elaborate percussion kit offstage, cellist Barbara Bogatin offered a few audience-soothing remarks about the next item on the afternoon’s agenda — Elliott Carter’s 1990 Con leggerezza pensosa — Omaggio a Italo Calvino. (See video, below.) By inviting listeners to follow Calvino’s call for “lightness of thought,” the composer signaled a certain delicacy and transparency that don’t always characterize this formidable composer’s work.

Bogatin described the polyrhythmic challenge of the piece, with the clarinetist (Jerome Simas) counting in three, the violinist (Eliot Lev) counting in four and the cellist and speaker counting in five. Listening to this five-minute piece was anything but a numerical exercise. By turns spare and lyrical, whimsical and earnest, Con leggerezza used mirrored and echoed fragments to lure the listener into its intuitive logic. Pointilist pizzicato gave way to melting tone clusters. There was a lightness of musical touch as well as thought throughout. Clearly well-rehearsed, the piece got a keenly attentive and committed performance.

Simas, this time on bass clarinet, was joined by flutist Catherine Payne, oboist James Button, clarinetist David Neuman, bassoonist Steven Dibner, and French horn player Jessica Valeri for the Janáček. Once again the performances were first-rate, each player providing individual character while contributing to a warm, blended ensemble. A low curved wall, that both reduced the size of the Davies stage to chamber scale and reflected the sound into the half-filled house, was an asset here and throughout the program.

The first two movements were lovely and engaging. The taut melodic motif of the first movement rose to a jolly celebration marked by an amusing huffing and puffing by the bassoon. The Adagio had a seductive sighing quality, wittily undercut here and there by little jabs of subversive humor. Simas was especially fine in coaxing out an eloquence from his bass clarinet.

But then Mĺadí seemed to lose musical interest. The Vivace never gained much traction, despite the bright shine of Payne on piccolo. The final movement gave off a similar sense of idleness. The composer, it seemed, had only so much to say about Youth.

The second half of the concert was devoted to Tchaikovsky’s broadly wrought sextet. From its assertive opening gesture to the agitated closing measures, the piece was eventful, richly developed, and colorfully lit with folk melodies. Passage after passage was persuasively argued, with cellist Amos Yang consistently impressive and impassioned. On the debit side were a certain reedy sound overall and some notably inert work by the two violists.

The whole felt less than the sum of its parts. The piece rolled on without gaining real momentum and urgency. A speedy charge to the end delivered a strong climax. Stronger still, in recollection, were those incisive small etchings that came at the outset of the afternoon.

Are We Ready for Something Different at SFS Chamber Music Concerts? An Audience Says Yes.

Lou Harrison’s Varied Trio was only on the program in commemoration of the composer’s anniversary. But the audience loved it.