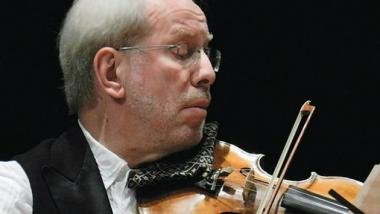 "Celestial and inward... cheerful, witty, amusing” — these are not words normally associated with the music of Béla Bartók. More likely, descriptions would include "stark, powerful, dissonant, intense." And yet, the first set of adjectives, the composer's own words about his youthful Violin Concerto No. 1, are exactly right. And, as performed by Gidon Kremer and the San Francisco Symphony, under the baton of Andrey Boreyko, Bartók's love letter was served at the Thursday, Oct. 29, matinee as a lyrical, heartrending, utterly beautiful experience.

The time long has passed since reports such as this one from the Good Music Guide:

The music of Béla Bartók has a reputation for being difficult, dissonant, percussive, jarring, even ugly. It seemed to lack the tonal qualities of melodic music such as Rachmaninov's symphonies or the lush orchestral coloration of the impressionists like Debussy. It was rubbished by many critics of the time, and largely ignored by the public.

But those who are still misled about this seminal composer, should look for a KDFC-FM broadcast in the near future, and take the cure for such misconceptions.

Bartók was only 26 when he wrote the concerto in 1907, in the blush of his first great love (for Hungarian violinist Stefi Geyer, who liked the music but not the composer). Two years later, as Bartók was working on his first string quartet, he wrote to Geyer: "The first theme is the theme of the second movement [of the concerto]: this is my funeral dirge." The concerto was first performed in 1958, after Geyer's death. There are no dark shadows in the two-movement concerto, only the quietly rapturous passion of the Andante and the glow of the Allegro.

There are no dark shadows in the two-movement concerto, only the quietly rapturous passion of the Andante and the glow of the Allegro. In Kremer's interpretation, the music flowed inexorably but with a light touch. No matter how technically difficult the score may be, Kremer's violin sang with a seamless legato characteristic of only the greatest singers. He consistently shaped the melodic line perfectly.

The work sounds neo-romantic, and at times seems to channel Brahms, but it's all profoundly original and boldly modern — strangely so when the listener remembers that the concerto was written more than a century ago.

Boreyko, 58, music director of the Belgian National Orchestra, made an impressive San Francisco debut, leading the orchestra just as authentically in the Bartók as in the other two works, both more obviously related to the St. Petersburg-born conductor's experience and background: Prokofiev's Lieutenant Kijé Suite and Tchaikovsky's Suite No. 3 in G-Major.

The orchestra shone in both works, with notable solos — especially in the Tchaikovsky — but for this listener, at least, strong visual memories made the music appear almost as soundtracks. Prokofiev wrote the suite for a film, also titled Lieutenant Kijé, which satirizes bureaucracy, but the suite became much more famous than the film. Then a British film, The Horse's Mouth (1958), about the adventures of an artist exploiting his friends and acquaintances, and featuring Alec Guinness (who also wrote the screenplay), used Prokofiev's jaunty score, and that film unreeled in my mind as the orchestra played.

Visual association is even more dominant for the Tchaikovsky suite, a lion's share of which is the concluding movement, Theme and Variations — almost half an hour of the work's 40-minute length. From the forerunner of American Ballet Theatre, circa 1947, to across the street from Davies Hall, in the War Memorial at the present time, that music played more times than I can count, as George Balanchine's 1947 Theme and Variations, the master choreographer's steps indelibly associated with every note of the music.

By the time the grand polonaise bounced back from the acoustical clouds in Davies Hall, all I could see was Balanchine's climactic finale for the entire cast of 26 dancers. Something extra though: The music in concert is always freer than from the pit of a ballet company, and so it was under Boreyko's baton, with the orchestra having a field day with the irresistible rhythm.