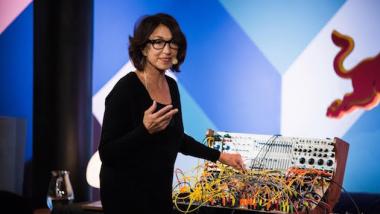 SFEMF Channels Currents of Electronica From the Beautiful to the Baffling

S.F. Electronic Music Festival mounted its 18th season last weekend — not quite a milestone birthday, but still, the mood was celebratory. It’s not hard to see why.

Electronic music pioneer Suzanne Ciani opened her set with an adaptation of sequences she originally performed in 1975. Back then, she said, nobody understood where the sounds came from; in fact, she wrote a 40-page performance manual for the Buchla 200 (then her instrument of choice) in order to fulfill a grant requirement for the NEA. But now? “These are my people,” Ciani addressed the packed Brava Theater. “I don’t have to explain anything.”

It’s true: many people in attendance were specialists, other electronic music-makers. I’m not one, however, and understood very little of what I’m sure was a sound explanation by Ciani. That’s where SFEMF excels: the organizers’ commitment to promoting diverse aesthetics creates an unpretentious atmosphere, one in which even the uninitiated can find something to enjoy.

The last performance of the festival, Ciani’s rhythmically informed, techno-flavored set felt, unsurprisingly, the most historical — like a performance of In C at the end of a minimalism festival. That work had its time; I found more exciting the newer compositions for synthesizers.

Performing as Waxy Tomb, Jules Litman-Cleper (a Bay Area native) combined episodic music with rotating 3D projections in a way that felt old-school but never tired. Grotesquely bulbous yet satisfying to look at, this imagery augmented music that occurred in fits and starts, but was always interesting and imaginative.

Saturday’s high point was conduit, in which Kaori Suzuki (an Oakland-based composer and synth-builder) constructs pure high frequency tones and pulses, whose interplay creates auditory distortion products. In practice, it’s music of perception: individual tones, almost indistinguishably high in register, pulsated in ways that my brain immediately attempted to order. One pitch seemed to stick out, then another, and I began hearing regular rhythmic cells, a few seconds or so in length.

conduit was meditative not because the sounds themselves created stillness or quietude, but because Suzuki performed the process with intensity: she gave the audience enough time to sit with and become totally immersed in the tones. It was a long set, but mostly necessary: as the piece went on, it was fascinating, to try to track these perceived patterns to their logical ends, to deliberately hear them in different ways, to hear the noise. Many people didn’t want to engage: they were on their phones, showing their phones to others, desperate for something to do besides listening.

It was JH1.FS3, the duo of Frederikke Hoffmeier (who performs as Puce Mary) and Jesse Sanes (Liebestod), that I couldn’t do. I’d streamed some of their debut LP, Loyalty, whose field recordings are uniquely intimate and vulnerable. But this was bad preparation for Saturday’s set, which felt unapproachable, bleak, and loud with no associated imagery to lift it from its bottomlessness.

Works by Dax Pierson and Beast Nest, both East Bay residents, were no less interesting for being friendly. Seemingly unconcerned with traditional notions of temporality, Beast Nest’s (Sharmi Basu) droning You were so fucked up to me I thought I was dreaming feels as if sliding in from another dimension. Visually stunning projections swirl with icons and nature imagery — mountains and fires, astronauts falling through the sky — but it would be reductive to call Basu’s work calming or feel-good: the effect is almost as manic as it is vibrant, ceaselessly stimulating, and all-encompassing.

There’s a lot to be excited about in Pierson’s The Nervebumps Suite (for Mac products and other equipment): scattered whistles coalesce in a richly layered soundscape, and complex, unpredictable beats come in and out over the course of the three-part work. Sometimes the samples feel flat, but occasionally (such as when a thick texture suddenly reduces to a bald piano line) Pierson’s curating hand impressively characterizes these pre-made sounds. This project represents a newer medium for him — formerly a touring multi-instrumentalist in several groups, a major injury caused him to change gears — and I’ll be interested to see what he does next.

The expansive festival embraces everything from cassette culture to the hip-hop/noise frontiers of Daveed Diggs’ clipping.

Sometimes a walk on the wild side leads to new perspectives.