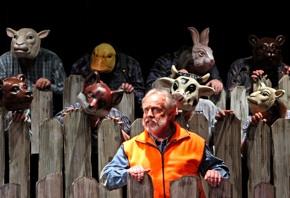 Jeff Kaliss on February 22, 2010
An infrequently mounted masterpiece, bounteous with beautiful and dramatic passages, and delivered by a cast headed by fine principal voices, forms a strong foundation for edifying opera. That’s reason enough to catch one of West Bay Opera’s performances of Carl Maria von Weber’s fascinating Der Freischütz (The freeshooter) while you still can. If stage director Yuval Sharon and his crew had been able to realize a cohesive and supportive design for the production, this rare jewel would be shining even brighter.

Judging by Friday’s opening-night performance in Palo Alto, it’s a project both enticingly challenging and potentially daunting. The story, apparently drawing on German folktales, is relatively static but morally dynamic in a manner that foreshadows Wagner (as does more than one element of Weber’s music here). A hunter, Max, must prove his marksmanship to win the hand of Agathe, daughter of the head forester, Kuno. He engages the help of another hunter, Kaspar, who’s literally bedeviled and thus able to help Max cast a set of magic bullets, the seventh of which is directly under the control of Samiel, the “Dark Hunter” who’s the embodiment of the Devil within the opera. In the Act 3 “trial,” in the presence of Prince Ottokar, the firing of the seventh bullet both causes Agathe to faint and fatally wounds Kaspar. The prince’s indignity at Max’s use of magic threatens to sever that contrite man’s betrothal to Agathe, until a holy Hermit stands up for Max’s basic goodness.

The only other production I’ve seen of Der Freischütz was a 2001 performance, on DVD, by the Hamburgische Staatsoper, whose stage director, Peter Konwitschny, approached the challenges of the story by facilitating dramatic interaction within a context of humor and fantastic visuals, including a polymorphous and ubiquitous Samiel. In the West Bay Opera production, the impact of Samiel (played by Gregory Stapp) is diminished by having him appear only once and briefly, delivering the rest of his speaking part from offstage. By contrast, there’s an overabundance of superfluous elements that impede or even restrict the characters’ interactions, including animal masks for the chorus in Act 1, an enormous picket fence, and a house (from Jean-François Revon's set design) within which the two principal females, Agathe (Paula Goodman Wilder) and her cousin Ännchen (Patrycja Poluchowicz), are literally stuck in the windows for a significant portion of the opening of Act 2. There’s nothing wrong with Revon’s and costumer Rachel Shachar’s having updated the action and transplanted it to the American West, but Sharon’s stage blocking is mostly outdated and static.

Thanks be, then, that the power and urgency of vocalization by both lovers, Wilder’s Agathe and Ben Bongers’ Max (despite the latter’s preannounced cold), virtually frees them from theatrical restriction, enabling them to showcase Weber’s impressive sense of melody and nuance. The reverent cavatina “Und ob die Wolke sie verhülle” (and if the Heavens are occluded), as delivered by Wilder at the opening of Act 3, is alone worth the price of admission (to both the Lucie Stern Theatre and Heaven!); it’s one of the most transcendent moments in all opera. Poluchowicz’s coltish Ännchen establishes another sort of engaging musical partnership with Agathe, in a bright, ingenuous soprano that’s distinctly and appropriately different from Wilder’s. Bass-baritone Peter Graham invests Kaspar with a virile yet vulnerable tone, and all four principals fare well as actors.

The secondary roles are also well-sung, including basses Eric Coyne as Kuno and Gregory Stapp (doubling) as the Hermit. A quartet of Bridesmaids — Virginia Phelps, Laura Bouchard, Lisa Sueyres, and Barbara Heninger — ably showcases one of many charming Germanic folk elements in Weber’s score, also apparent in a Hunters’ Chorus, “Was gleicht wohl auf Erden” (What on Earth exceedes the joy of hunting), together providing evidence of the strength of the West Bay Opera choral ensemble. After a slightly shaky start, General Director and Conductor José Luis Moscovich’s orchestra plays skillfully and spiritedly, reflecting their leader’s sensitive, patient pacing of vocal highlights. A troupe of dancers, choreographed by Yannis Adoniou, and some projected film clips are curious though not vital.