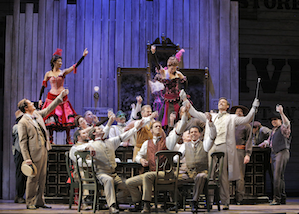 Can she rag it?

That’s what a Chicago nightclub owner wants to know, in the second act of Show Boat, about Magnolia Ravenal, a delicate blond who learned to sing prettily on a sleepy Mississippi River boat but now has to speed it up and vamp it up to make it in a different show business realm.

In many ways that’s the same question posed by the San Francisco Opera’s co-production of this 1927 landmark musical. How well does the show, with ravishing music by Jerome Kern and a capacious book and poignant period lyrics by Oscar Hammerstein II, based on the novel by Edna Ferber, cross the divide from Broadway to opera house?

The answer is mixed, as such genre-crossing ventures often are. It’s wonderful, first off, to hear a pit-filling orchestra give the score its due. From the first plush and brassy strains of the overture through every evocative, show-spanning reprise of “Ol’ Man River,” the majesty and rich color of the orchestral music flow broadly along, with conductor John DeMain confidently at the helm. Nothing has sounded like this in Broadway’s electronically despoiled houses for decades.

The marshaled resources of the San Francisco, Chicago, Houston, and Washington opera companies have delivered an immersive physical production. Peter J. Davison’s sprawling sets and dazzling, perspective-altering drops and scrim contain and frame the action beautifully and often tellingly. The dizzying expanse of the Palmer House in Chicago, a world away from the Mississippi delta and its sparkling white river boat facade, is especially choice. Paul Tazewell’s costumes unfurl a bright banner of delights, many of them color-coded in all-American red, white, and blue.

Director Francesca Zambello, who consistently storms the barricades that wall off opera and musical theater (at Glimmerglass Opera, which she directs, and elsewhere), has mounted a solid and mostly lively production. The solos, ensembles, and larger choral scenes are often smoothly and effectively fused, an important dramatic engine of the show. There’s lots of dancing, albeit rather repetitive in Michele Lynch’s choreography.

Bill Irwin, the long-ago Pickle Family Circus clown whose Broadway credits range from his own Fool Moon to Who’s Afraid of Virginia Woolf, plays Cap’n Andy Hawks, in a bandy-legged, slapstick of physical comedy. He, like others in the cast, has a fair amount of spoken dialogue, which is amplified, sometimes well, sometimes harshly. The singing is “warmed,” in Tod Nixon’s design, by area mikes. All the sung passages are subtitled, which is needed: Many of the lyrics are indecipherable. Artistically and technically, this Show Boat is a hybrid: ambitious, often impressive, but unsteady.

It’s in the voices and performances that the gears grind most noticeably. Baritone Michael Todd Simpson, in a role normally sung by a tenor, gives the single most satisfying performance as the romantic but untrustworthy Gaylord Ravenal. His voice is firm and full, with neither too much vibrato nor any reductive Broadway-style belt. More importantly he seems to inhabit the character in both a realistic and slightly enlarged sense. In “Make Believe,” his first duet with Magnolia (Heidi Stober), he gives the show a sudden, expansive stillness. Time stops and the skies seem to open up. It happens again in “You Are Love” and even “Why Do I Love You?”, the sweet small duet he sings with Magnolia and their young daughter (Carmen Steele).

There are, to be sure, other fine voices in the show. Bass Morris Robinson gives a truly profundo account of “Ol’ Man River, ” with a smoldering fire of anger and forbearance. Angela Renée Simpson thickens the air with premonition in Queenie’s “Mis’ry’s Comin’ Aroun’.” 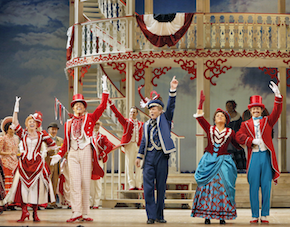 But this Show Boat shows the strains stylistically. San Francisco Opera favorite Patricia Racette is the biggest disappointment as Julie, the tragic heroine who unravels after a charge of miscegenation is hurled at her and her husband, Steve (Patrick Cummings). Racette’s two big numbers, “Can’t Help Lovin’ Dat Man” in the first act and “Bill” in the second, are badly judged, stiff, and padded with vibrato.

Kirsten Wyatt errs on the other side, over-selling Ellie Mae Chipley’s comic verve. John Bolton fares better as her vaudevillean partner. Stober sings admirably, but there’s something remote and chilly about her Magnolia, both vocally and dramatically. Even Irwin’s antics, diverting as they are, are something of a stand-alone set-piece.

Show Boat is in many ways a natural cross-over vehicle. It’s a grand, operatically scaled piece of storytelling — to a fault in the jerry-rigged second act that spans two decades in the space of a scene change. There are magnificent melodies and big themes, about race and class as America churned from the 19th century into the 20th. This is not the first attempt to steer the Kern/Hammerstein classic into the opera house — San Francisco Opera General Director David Gockley mounted a 1982 production when he led the Houston Grand Opera — and it won’t be the last.

If this version falters and runs aground in various ways, it is often stirring and entertaining. And just when it seems “Ol’ Man River” has returned one too many times, it rises up to end this Show Boat in a moving paean to the endless, mysterious flow of time itself.