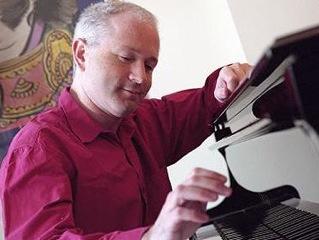 From the “Simple” to the Sublime

Lisa Hirsch on January 18, 2010
The San Francisco Symphony Chamber Music concert on Sunday marked George Benjamin’s third and last appearance as the Phyllis C. Wattis Composer in Residence. He was represented on the program by two works, Viola, Viola; and Piano Figures. Both are superb additions to their respective repertories. (See SFCV’s recent feature on the composer.)

Benjamin, who performs most often as a conductor, nonetheless took the stage as a pianist for Piano Figures, which carries the subtitle Ten Simple Pieces for Piano Solo (the program mentions that Benjamin wrote them for young pianists). They are simple only in that each piece is brief and focuses on just one or two musical ideas. While the first, “Spell,” is technically uncomplicated and could be performed by a first-year piano student, the player would need an advanced, confident technique for the middle pieces, and much daring for the last few movements, which are positively virtuosic. The set opens like a distant echo of Mikrokosmos, Bartók’s much-loved series of pedagogical piano works, and closes with considerable dazzle with “Whirling,” which does, indeed, whirl around the keyboard at high velocity. Benjamin performed them with understated panache and much intensity.

The word simple won’t be found anywhere near Viola, Viola. Played with great dash and virtuosity by Jonathan Vinocour, the Symphony’s new principal violist, and Yun Jie Liu, associate principal violist, it’s a work of almost aggressive extroversion, a near-competition between the two violas. Benjamin achieves this effect through temporally tight contrapuntal writing. Where you might hear a theme repeated at several measures’ distance in a typical fugue, here the repetitions were just a few beats apart, giving the impression that violas were stalking each other across the pages of music. Vinocour and Liu performed like the virtuosos they are, through the thickets of multiple stops, harmonics, and jagged rhythmic figures.

The concert opened with a marvelous performance of Debussy’s sublime Sonata for Flute, Viola, and Harp, played by Wayne Roden, viola; Robin McKee, flute; and Douglas Rioth, harp. Written near the end of the composer’s life, when he was ill with the cancer that eventually claimed him, the Sonata avoids the virtuoso flash and cliches that would tempt most composers writing for that combination. Instead of rapid scales or arpeggios with many high notes, the flute lines are mostly in the instrument’s warm low-register, and the harp takes on a guitarlike personality much of the time. The viola plays off the natural sonorities of the flute and harp, sometimes with plucked notes, now and then with gorgeous legato.

Roden, McKee, and Rioth beautifully captured the emotional range and varied textures of the work, the mercurial glories of the languid opening movement giving way to the jaunty, hurrying figures and almost-medieval feel of the second and then to the even more driven third. It’s a big moment in the second movement when, bursting from its low-register confinement, the flute is finally allowed to soar.

Britten’s String Quartet No. 2, Op. 36, occupied the entire second half of the program, performed by violinists Sharon Grebanier and Mariko Smiley; Gina Feinauer, viola; and Margaret Tait, cello. This particular work made an excellent musical companion to the Debussy and Benjamin heard earlier, in part because the three composers lie outside the Schoenberg–Stravinsky axis that dominated much of 20th-century music and because all use striking and complex instrumental textures as compositional elements.

The odd proportions of the Quartet must present special difficulties in performance, for the last movement is nearly twice the length of the first two movements combined. That movement is in the same Baroque form as the last movement of Brahms’ Fourth Symphony, a chaconne, in which a bass line is repeated as the upper instruments play variations or ornaments or countermelodies above it. It’s monumental in scope, with its 22 repetitions of the bass, standing in marked contrast to the brief first movement and its serene opening and then the scurrying, intense middle movement.

The quartet of players can’t be faulted on any technical grounds, and by and large they gave a good performance. But though each movement started and ended well, within each was at least one passage where the musical momentum faltered and the phrasing lost direction. Given that the four are SFS members, it’s unlikely that they can devote as much time to rehearsing together as full-time string quartets can. It would be good to hear what they can do with the Britten when they’ve lived with it longer.