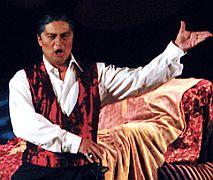 Lisa Hirsch on September 25, 2007
The death of Jacques Offenbach before the 1881 premiere of Tales of Hoffmann left opera companies with a confusing mass of performance choices. In the end though, the textual decisions matter far less than whether a company succeeds musically with the piece. San Francisco Lyric Opera's new production, heard on Saturday at the second performance, succeeds wildly, with splendid singing and playing, effective stage direction, clever sets, and fine conducting. One traditional casting decision certainly helped the production's dramatic and musical cohesiveness, as well as made economic sense for a small company like this. The 21 named roles were sung by eight singers, with the four villains, four heroines, and four character tenor roles sung, respectively, by baritone Roberto Gomez, soprano Shawnette Sulker, and Trey Costerisan. Only tenor Richard Byrne, in the title role, had just a single character assignment, because Hoffmann appears in all the acts as himself. The baritone and soprano roles each represent facets of a single character, as we discover at the end, and so they might also be regarded as playing just one role.

All photos by David Ransom

The production, directed by Heather Carolo with sets designed by Kim Tolman, makes efficient use of the tiny stage at the Florence Gould Theater at the Palace of the Legion of Honor. A small platform at center stage played its part in all the acts and the prologue, providing visual focus and a second stage level for Giulietta's couch, the tavern bar, and an operating table for the doll Olympia. At the back of the stage, wooden frames are variously dressed as scene-setting pictures (masks for Venice, for example) or windows. Each scene is in the same turquoise and red color scheme, a nice unifying touch. By and large, Carolo gets good dramatic performances from the principals, and she succeeds in moving everyone around the stage well. She misfires somewhat in populating the Act 1 party with couples consisting of mad scientists and their automata, and the goings-on in the Venice scene won't be to everyone's taste. Do we really think the libretto has Nicklausse arising from Giulietta's embraces at the beginning of the act? In any event, it's the vocal and orchestral performances that are primarily responsible for the production's successes.

Byrne has sung with numerous opera companies in the United States and Europe, and on the basis of his Hoffmann it's hard to see why his career isn't even bigger. He brought a bright, vibrant tenor as well as dramatic ardor and fine French style to his singing, with the proper forward placement of the voice and vowels, as well as crisp, clear diction and easy, unforced movement from note to note. If anything, Byrne gave the impression of singing into a much larger house than the Florence Gould, because by the end of the evening, the vibrancy had become a bit wearing. Still, he was a most convincing Hoffmann, pursuing his loves across the face of Europe. Sulker, singing the roles of Olympia, Giulietta, Antonia, and Stella, had the most difficult vocal assignment of the evening. While Offenbach intended the roles to be sung by one singer, few sopranos can encompass both the mechanical doll Olympia's mad, stratospheric coloratura and the more dramatic music written for Giulietta and Antonia. In the small theater, Sulker was able to bring off the latter two roles well enough, succeeding better with the youthful Antonia than with Giulietta, where a more sultry voice and approach would have helped. Still, the Barcarolle, sung with mezzo Katherine Growdon, lilted erotically. Sulker's soubrette charm and comparatively light voice worked best of all for Olympia, for which she nicely managed the paradox of being musical and mechanical at the same time. Comic direction took into account the fact that the highest notes in the doll's aria weren't quite in Sulker's voice. Gomez got off to an unpromising start, sounding stiff and overly grainy as Lindorf in the prologue, but by the Olympia scene his voice had warmed up and smoothed out. His villains were suitably menacing and dominating, with Dapertutto's aria "Scintille, diamant" providing a vocal highlight.

Growdon's Nicklausse and her brief appearance as the voice of Antonia's mother were as revelatory as Byrne's Hoffmann: Here is French music as it should be sung. Growdon has just the kind of pointed, well-focused mezzo you'd expect to hear in Paris, and with her slim build and loose-limbed movements she is most convincing in this trouser role. We can hope to see her as Cherubino, Oktavian, and their sister-brothers. Costerisan ably sang the four character tenor roles, and was especially funny as Frantz in the mostly grim Act 2. Martin Bell's liquid bass made a strong impression as Crespel and Luther. The well-schooled chorus sang ably and enthusiastically.

Brilliant Support From the Orchestra

Meanwhile, an assortment of marvels took place in the pit. The tiny orchestra played brilliantly and nearly flawlessly, the technical excellence more than making up for the small numbers. Concertmaster Rita Lee, cellist Robert Howard, hornist Daniel Wood, and harpist Anna Maria Mendieta all made strong solo contributions. Barnaby Palmer conducted with finesse and great musicality, shaping the music idiomatically and providing strong support for the cast. Two performances of Tales of Hoffmann remain, on Sept. 28 and 29. It's a must-see for fans of French opera or anyone who enjoys the pleasures of good singing or opera on an intimate scale.