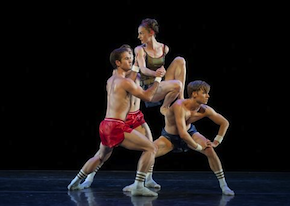 With its terrific dancers and its successful explorations of new repertory, Smuin Ballet appears poised to climb to a higher level in the regional ballet firmament. Launching a peripatetic season to include shows all over the Bay Area at the Palace of Fine Arts Friday night, Smuin offered two works by rising choreographers. The company premiere, Adam Hougland’s Cold Virtues, was created in 2003 for the Louisville Ballet. While not entirely successful in fulfilling its narrative arc, its rip-roaring movement vocabulary — which the dancers brought forward with stunning energy — and brilliant exposition of Philip Glass’ Violin Concerto makes it unforgettable.

It’s a story of a woman bent on domination (who knows why?) who ultimately hurts only herself. The setting is a 1930s speakeasy, full of smoke and whirling overhead fans as well as 10 men and women clad in brown who march and jump in unison and leap or are lifted in forceful diagonals, the angles of their extremities suggesting swastikas. It’s sort of James M. Cain meets Lucinda Childs and the New Dance Group, but it goes forth with a kind of manic beauty.

This is one of those voice-of-a-generation things you find every once in a great while in a movie or a book or yes, a ballet.

The woman and her lover (Susan Roemer and Joshua Reynolds) seduce another couple (Terez Dean and Jonathan Powell), driving them away from each other; her ostracism from a community that takes care of itself is pretty inevitable. It would have helped if the costumes (by Marion Williams and wonderfully evocative of the 1930s) made a bigger distinction between the two principal women; in motion, their identities were blurred. The piece ultimately is puzzling, but I am more than willing for Hougland to puzzle me again.

Trey McIntyre’s Oh, Inverted World, a Smuin Ballet premiere in 2010, drew raves from The New York Times at the Joyce Theatre last summer. It’s easy to see why. This is one of those voice-of-a-generation things you find every once in a great while in a movie or a book or yes, a ballet. Others in the club are Paul Taylor’s Esplanade, Twyla Tharp’s Deuce Coupe, and (here’s a book) J.D. Salinger’s Catcher in the Rye.

Set to songs by the Shins, a rock band in Portland, Oregon, it’s wittily costumed by Sandra Woodall in funny playclothes — gym shorts for the guys, and bare chests; cute little tank exercise tops and shorts for the women, and the best touch, those awful striped-top tube socks for the men. Oh, Inverted World, danced off point and totally contemporary in flavor, captures through the body, in ways witty and nearly heartbreaking, the interior and exterior lives of eight young people. Somehow, even a person who merely used to be young (in an earlier civilization) can tell that Oh, Inverted World has hit the nail squarely on the head.

A lot of what’s happening happens in groups, which provides chances for people to be outsiders while seeming to be in; these are occasions for self-doubt and distancing, for mistrusting the forward movement of life, often while moving frantically.

Somehow, even a person who merely used to be young can tell that Oh, Inverted World has hit the nail squarely on the head.

The three dancers who experience these moments in solos, at separate times but all with remarkable eloquence, are Christian Squires, who depicts both a body and a mind in the act of changing itself; Jane Rehm, an outgoing, even antic woman with moments that look exquisitely isolated; and finally John Speed Orr as, by turns, leader of the pack/ bottom of the heap. Squires can even make his back dance, and you feel you must watch his every move, even though he’s facing upstage. Orr whisks his arms and torso through a series of curving moves, and then his hand reaches up, finds the center of his face, carefully explores the area around his right eye. He’s wondering what the deal is. Is there a deal? Maybe it’s nothing, or maybe he’ll go back and explore it again. As he resumes his dance, we can’t be sure. We can be sure that we’ve been watching people in groups, engaging in movement that isn’t ballet and isn’t everyday either.

The guys fool around in close formation; camaraderie becomes something bordering on rivalry, then dissolves into horseplay and fellowship. Men and women hold as if they’re dancing the lindy. When they step apart, the space between them is an area that admits doubt. Are they as happy as they seem? Will they keep dancing? Will they change, or change partners? Will they, like the three soloists, ever go it alone? On with the dance.

The Smuin Ballet these days looks like two different companies. From one we get the work of Michael Smuin, who founded the troupe in 1994 and who died in 2007. From the other we get adventurous programing under the artistic direction of former Smuin dancer Celia Fushile. This is not a knock on Smuin. He had a gift for creating accessible work and for training good dancers, and his choreography remains a substantial part of the repertory, with varying quality.

Starshadows (1998), a trio of romantic pas de deux, verges on nightclub entertainment, with bikini-based costumes and open-legged lifts. It’s the kind of work that Smuin seemed a little too comfortable with, skirting the edge of good taste, yet plucking the heartstrings in the final moments.

No Vivere, (1994), a solo on point set to the Gipsy Kings, showcased Robin Semmelhack going through flamenco-flavored ballet choreography that looked difficult and over-contrived. She did it ably, but conveyed no sense of pleasure in her own success. By contrast, Jonathan Mangosing brought a contemporary solo, Homeless (2000) poignantly to life, curling his body around Paul Simon and Joseph Shabalala’s plaintive tune, accenting the message with thrusts of his torso and contractions of his shoulders. Homeless has a heart of gold.