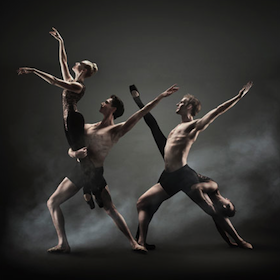 The program was called XXTremes, and it did seem as though Smuin Ballet, opening its season last Friday at the Palace of Fine Arts, journeyed from pole to pole (except that there were three poles, separated by two intermissions) and had a good time doing so.

Of maximal interest was Jiri Kylian’s Return to a Strange Land, a new repertory acquisition. Small, neoclassical, and quite heartbreaking, choreographed for the Stuttgart Ballet, it premiered in 1975, a tribute to the company’s leader, John Cranko, who had died suddenly in 1973. Kylian went on to lead the Netherlands Dance Theater, where the piece swiftly became a cornerstone of the repertory. When Netherlands Dance Theater plays Cal Performances at Zellerbach Hall next month it will bring no Kylian, which makes the Smuin rendition even more of a must-see.

Kylian, now retired, is a major figure in dance and singlehandedly responsible for Netherlands’ singular acclaim. So this is no small omission. In the program notes, Smuin Artistic Director Celia Fushille spoke of the way she identifies the death of Cranko with Michael Smuin’s sudden demise in 1993. Heartrending as that must be to members of the company, Return … is a masterly universal expression of contemporary loss, dislocation, and loneliness.

The Smuin company gave a good account of the piece — for six dancers in four different, but always interdependent trios and duos, set to music by Leo Janáček — but it has some rough edges, likely to be smoothed out as the season progresses to shows at other Bay Area venues.

There are lovely passages with far-flung extensions in attitude and arabesque, quiet yet startling inverted lifts, closely entwined backbends. At the risk of implying that you had to be there, let’s just say that it would be great if you could spend some quality time in Kylian’s strange land. That was the evening’s centerpiece. Dear Miss Cline, Amy Seiwert’s charming 2011 evocation of country legend Patsy Cline through her music, was neatly paced by the 11 dancers in countrified garb from the 1950s. The lively moves, as well as the lyrics’ musings on love, loss and relationships, have a fluency and affectless charm that sometimes reminds of Paul Taylor’s folksier pieces. But the conclusion trails off into nothingness with something called I Don’t Wanta, a song of no particular resonance. How much more fun, in that achy-breaky way, it might have been to end with a Cline hit like Walkin’ After Midnight.

Your scribe confesses to having no particular affection for Carl Orff’s Carmina Burana in all its bombastic glory, which makes it hard to watch the dances it has inspired. The one Smuin did in 1997, however, is not without its charms, and the company performs it beautifully. It opens with the normal degree of Abnormal Significance, having a female dancer, curled in an egg shape and balanced on the feet of other dancers, look as if she’s hatching into the universe.

Not for nothing are the costumes purple. But then Smuin choreographed some really nice, even understated ensemble work of humane intimacy, poetically executed. Too, there are admittedly some terrific, authentic-looking tributes to classical ballet, particularly in the charming Russian folk-style evocations. And yes, in this centennial year of Stravinsky’s The Rite of Spring, it is even possible to appreciate the final sequence when the cast clusters around that egg figure once again, and consider that, for all its annoying overtones, this can legitimately be a Chosen One moment. Ah, if only it were set to Stravinsky.