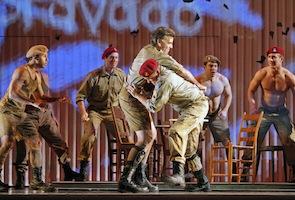 Like a well-trained infantryperson, Heart of a Soldier triumphed in its first battle with opera’s ultimate enemy, public indifference: Patrons greeted the premiere in the War Memorial Opera House with a nearly universal and sustained standing ovation. Credit for success, as in war, can be attributed to fine direction and planning, weaponry (voiceboxes), ammunition (words and music), execution, and support (sets, lighting, costumes, sound design, etc.). A question remains, however: Does Soldier have at its own heart what an opera needs to survive future encounters and even achieve glory some day?

By far the strongest element in the work is the musicality of Donna Di Novelli’s libretto, primarily due to its regularity of its meter within episodes, sprinkled with just enough variety to prevent stagnation. I was fascinated by the way the rhythm of the title, a tribrach and spondee, pervades many of the key passages. The flashed supertitle instantly brought music to my ears, even before I matched them to composer Chrisopher Theofanidis’ music. The text is disarmingly simple, yet never banal.

The content of the libretto, however, is a bit more problematic. Essentially, it’s a story of Rick Rescorla, a hero whose military training and philosophy is that the heart of a soldier is “the urge to save your brother.” These propel him as a soldier to lead a rescue of his close friend Dan Hill during the Vietnam war in the first act, and in the second act as a security chief to evacuate 2700 Morgan Stanley employees successfully from the World Trade Center during 9/11. Secondarily, it’s dual, but not intersecting love stories: the continuing buddy relationship of Rescorla and Hill, and Rescorla’s second-act marriage to Susan Greer.

Challenges in the Libretto

There are three problems with this scenario. The first is that it is about real people, two of whom are still alive. Potentially difficult facts must be respected, such as Hill’s conversion to Islam. The second is that the 9/11 disaster is dangerously laden with societal baggage. (Case in point: a monger was out on Van Ness Blvd. handing a list of conspiracy theories to exiting patrons.) Thirdly, the subjects of the two acts threaten to split the work into two operas with little in common other than the protagonist’s guiding principles.

Given these issues, the results are better than expected. The three main characters have depth and passion; Di Novelli doesn’t tiptoe around eggshells about them. Hill’s conversion is given a safe reason, a longing for an ordered world and forgiveness of sins — without any political connotations. The end of the towers is not overdramatized. The audience is directed toward the sadness of loss of life, not anger at perpetrators.

But the two acts do not completely cohere, despite moving renditions of the two love stories. One way to do so would be to make some kind a comparison between Vietnam and the twin towers; an extremely risky notion, politically. A better approach would be to insert a dramatic conflict in the first act that gets resolved in the second.

But the facts are facts: The two soldiers, despite differing philosophies, do not come into conflict; they barely argue at the conclusion to Act 1. They do have internal struggles, but not at an operatic level, for the most part. Rick leaves the Army and becomes disillusioned about Vietnam. But he had doubts about top bosses even as a five-year-old, and sings one of the best lines in the libretto, “I won’t do it any more. All that loss, again. Orders from superiors that aren’t.”

If the two men were fictional, they could be chasing the same girl or something. The truth is — and this is an insurmountable problem in the libretto—there is no antagonist in this story. Director Francesca Zambello claims that the antagonist is “history … the lens through which we see Rick, Dan and Susan struggle and ultimately transform.” Accepting such an external, deus et machina as a character would move the opera into melodrama. This opera is too good for that, but structurally flawed nevertheless because a true antagonist cannot be found to tie the two acts together.

The Heart is in the Music

Now to the question as to the heart of an opera. A superb libretto is a wonderful thing, but if the music stops beating some day, or never starts, the opera will die. Theofanidis’ music has much going for it: He won the Masterprize in 2003 primarily through audience appeal. I recently reviewed a similarly attractive symphony CD of his.

Theofanidis says “I try not to think about musical style,” but to me it’s British-American, with a flashy, conventional exterior covering a folksongy harmonic interior that emphasizes pedal points, flat-seven scale steps (B-Flat in the key of C) and poignant harmonies based on the interval of the second a la Benjamin Britten. The pedal points come in handy in anticipating a musical coup de théâtre where a bagpipe plays offstage in the last act — a nod to Peter Maxwell Davies’ An Orkney Wedding, with Sunrise. Although several listeners told me he sounded like John Adams to them, I think they were confusing the current day news topics of the libretto (an Adams/Peter Sellars specialty) with the actual music, which in Theofanidis’ case has no traces of minimalism in it, unlike Adams.

Theofanidis does have one big march tune (“Train your heart to not give out / Though what’s to come it cannot know”) and a couple of all-too-brief melodic moments (a waltz tune during the wedding scene that ends Act 1, and the Imam’s call to prayer). More in this department — a strong suit for Theofanidis, who displays a fine lyric sense in his Rick/Susan love music — would be welcome. For example, a real tango tune for the tango Rick and Susan try to dance in Act 2.

“Train your heart,” beginning with a strong leap of a fifth like the central section of John Williams’ Cowboys Overture, is a tune patrons should be whistling on the way out. More references to it should occur in the orchestra or in the vocal lines. Many people I discussed the opera with at intermission could hear no tunes at all, which suggests that the composer is a long way from Andrew-Lloyd-Webber overkill. Scene changes are cinematically instant, which helps move the story, but this approach makes it hard to insert any orchestral interludes, which would be an excellent way to better develop musical themes. The opera has plenty of tunes in it, but they are too short, and not repeated enough. The motive used to characterize a lion, basically just one note followed by a chord, could be extended into something more lyrical. The biggest disappoinment, musically, is Rescorla’s one big aria in Act 2, “For we fought side by side at Marathon,” which doesn’t have the melodic/harmonic punch of his best music. For once, the pace slows to take stock of things; yet the music here fails be as much of a show stopper as the “Train your heart” melody.

But immediate appeal is no guarantee of future acceptance. The best operas have challenged audiences in some parts, and placed chocolate candies in others. Without such challenge, future generations may find little of interest after they tire of the candies. Among recent operas of British origin, those of Harrison Birtwistle and Thomas Adès may prove to be longer lasting because of their musical strengths.

In the execution department, there was plenty of praise to go around. Thomas Hampson displayed a lovely baritone and fine acting for his lead role as Rick, though Theofanidis gave him some pretty low notes at times that forced him to greatly reduce volume. Tenor William Burden as Dan was completely mesmerizing in every word he sang, and was in outstanding voice. I’m already fantasizing Theofanidis improving and extending Burden’s  “Here, above the Earth” parachute aria so that I could hear him sing it for hours at a time. Melody Moore was a very fine soprano as Susan, and a terrific actor to boot. All the shorter supporting roles were well sung and a pleasure to hear. Zambello’s direction brought out the best in the stage performers, which, by the way, included Susan’s audience-melting dog.

Lighting (Mark McCullough) and sound design (Tod Nixon) were effective in the Vietnam battle scenes. Jess Goldstein’s costumes were appropriate and Peter J. Davison’s sets were spare (other than the more massive floors of the World Trade towers) and serviceable. I would have liked to have seen even more stage and lighting effects during Act 2’s Blue Sky choruses (“September vies us such a gift, a blue beyond other blues”), another place Theofanidis could extend a bit, for it has thrilling music.

So, inspection complete! Soldier, you pass for the time being: Boots are shiny, uniform correct. Just get some more melodic ammo, so that when you’re an old Soldier, you won’t fade away so fast.