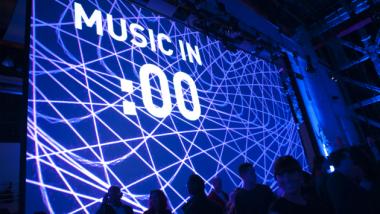 In it’s fifth and final iteration of the season, SoundBox presented Their Own Devices, in which young composers took a crack at making artistic sense of their digital age and of the myriad possibilities of digital tools. Composers, however, need to choose among those possibilities to make strong music, and in the evening’s most convincing work, Ted Hearne chose to use computers to manipulate musical time.

In his Law of Mosaics, written in 2012, Hearne leaves allows the audience to easily hear his procedures. The piece is largely a transcription of a digitally enhanced process. Hearne took snippets from existing music — much like DJs or hip-hop artists sample recordings —  altered them on a digital workstation, and then transcribed the result for string orchestra. Much like a mosaic, these small bits of different pieces are layered to create an entirely new aural image.

The music sounded like records played at a much slower speed, particularly in the third and fifth movements, titled “Climactic moments from Adagio for Strings and The Four Seasons, slowed down and layered on top of one another” and “Climactic moments from movement three, 3 times as slow as before.” At these points the listener can’t readily identify the source material.

Hearne isn’t just being funny with his long and straightforward titles, it is crucial that the audience knows what they are hearing is a machine’s work played live on normal instruments. This makes for a time-warp experience enhanced by the accompanying visuals: two lightbulbs smashing together in slow motion and a film that panned through the streets of Paris at about five feet high showing perhaps five total seconds stretched over minutes in real time. This illusion was easy to comprehend on screen and helped explain the music’s content beautifully.

This atonal, rhythmically irregular piece was hard to engage with, especially in the casual environment of SoundBox — with glasses occasionally clanging, listeners chatting, people walking through the room, and phones beeping. These are not inherently bad form in this new sound experience, but they did disrupt whatever creepy aura Iannotta wished to create.With a lone cellist and electronics in Saint Arc, Daniel Wohl demonstrated how electronics can significantly increase the range and timbre of an instrument.

The two works that came between the intermissions captured in miniature the theme of the evening. With a lone cellist and electronics in Saint Arc, Daniel Wohl demonstrated how electronics can significantly increase the range and timbre of an instrument. Cellist Amos Yang bowed vigorously throughout while the electronics added reverberation, distortions, and overtones. At times the music roared, at other times it whispered.

Adams’ piece, Shade Studies — which pianist Sarah Cahill commissioned from him as part of her ongoing celebration of contemporary composer Terry Reilly’s music — was a much more subtle combination of electronics and solo instrument. Cahill played mostly two-note chords or single notes very softly and with frequent, pregnant pauses. The electronics supported or decorated the piano’s notes with barely audible, high-pitched drones. This delicate music was somehow impervious to audience shuffling and noise, largely because Cahill brings all the intangibles of a supreme and engaging performance onstage with her. Her motions were fluid and graceful, bridging the rests and helping the audience make sense of the clean, spare music.

Composer Tristan Perich, whose work opened the program, took the minimalist approach — metronomic rhythm with almost no variation in pitch, which creates a trance-like aura or invokes a persistent smoke-alarm, depending on your disposition. The piece combined 1-bit (i.e. on or off) electronic sounds with two live percussionists (Raymond Froehlich and Tom Hemphill) hammering even notes on crotales. Twelve minutes was long enough to render the loud and piercing sounds uncomfortable to listen to.