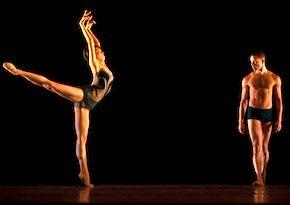 Resin, a stunning new ballet, will — no, I can’t help it — stick with you for a long time. Created for the Alonzo King LINES Ballet by its eponymous founder and set to an array of recorded Sephardic melodies, Resin, a cohesive suite of dance for solos, duos, and ensembles is over 40 minutes long and continuously spellbinding. Never (except, of course, at any Mark Morris show) have I seen dancers (men and women; six of each, all superb and some even more so) deployed so confidently as glorious interpreters and enhancers of rhythm and melody. The musical selections include work by Jordi Savall, Michele Claude, archival synagogue recordings, and a children’s song Alef-bet (or Alphabet), to name but a few.

King’s dancers have a solid grounding in ballet and modern dance, with training ranging from Juilliard and Alvin Ailey to the Kirov to the North Carolina School of the Arts. It falls to Victor Mateos Arellano from the Ullate School in Madrid to launch the proceedings, materializing from beneath a peculiar tubular curtain and captivating the audience with a fabulous propulsive quality that will be reiterated by everyone throughout the ballet. You see a lot of ballet vocabulary, but it’s passed through a Kingian filter that seems to elongate the extensions, add spring to the leaps, articulate the frequent moves into a modified passé, the leg often as not appearing in front rather than to the side of the standing leg. The dancers’ aplomb is superb. Ricardo Zayas, for instance, seems entirely comfortable launching himself into a 45-degree angle first one way and then, in midair, the other. King’s also a facile distorter, almost a trickster, forcing a limp on a dancer, as if to call attention to the tragic aspects of diaspora.

It’s almost unfair to single out notable performers, because they all are, but you won’t be able to take your eyes off the majestic yet speedy Courtney Henry, ethereal Yujin Kim, and versatile Keelan Whitmore. And then there’s the moment when everyone’s doing something different, followed in a nanosecond by the moment when they’re all doing the same thing, flying across the stage with heart-stopping unity.

The men wear good-looking trunks or long pants and are bare-chested; the ladies, in soft slippers, wear chic short tunics in jewel tones, and later some wear silver costumes that look like they were sprung from the Alhambra Palace.

Sharing the program with King’s 1998 Who Dressed You Like a Foreigner, Resin makes it clear that the dancemaker has grown tremendously, attaining new focus and clarity. The new ballet makes the older piece, for all its compelling moments, look sketchy.

The title Resin, apparently long in the conjuring since preview materials didn’t mention it at all, refers to a sap from a tree when it is bled for its gum. Frankincense and myrrh are two such resins, according to King, and the word myrrh derives from the Aramaic murr, which means bitter. When the resins harden, they’re called tears.

So there are bitter tears shed here. Midway through and in the final minutes, a material that looks like sand pours down from the flies, the tiny granules bouncing on the stage in yellow light. The dancers move into and out of this downpour, and at one moment, alluding to the use of hardened resin as rosin, as much for dancers’ shoes as for violins’ bows, a man rubs it onto the sole of his partner’s ballet slipper. Axel Morgenthaler did the lighting design and Robert Rosenwasser the production and costume design. It should be noted that while the sand effect made the dancers look golden and radiant, that enhancement is not without an accompanying sense of disorientation and discomfort, all a part of the sorrow of any diaspora, anywhere.