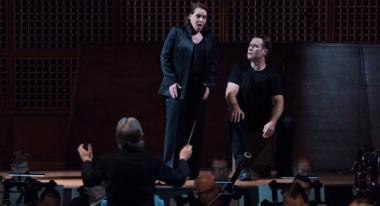 Powered by magnificent vocal ensembles in comic, tragic, and exultant modes yet burdened by a dramatically static libretto, Fidelio is a prime candidate for concert presentation. That made the opera a natural choice to cap the San Francisco Symphony’s three-week Beethoven Festival over the weekend at Davies Symphony Hall.

Swedish soprano Nina Stemme was the headline attraction for the three performances. She came through splendidly, with an intense, musically complex, and altogether absorbing performance as Leonore, the devoted heroine who disguises herself as a man and descends to the depths of a hellish prison to rescue her captive husband, Florestan. A transfixing Brünnhilde in San Francisco Opera’s 2011 Ring cycle, Stemme made a comparably vivid impression here.

From her first spoken lines on Thursday night, delivered with a potently internalized sense of purpose, to her gleaming peaks of celebration with tenor Brandon Jovanovich’s Florestan and the San Francisco Symphony Chorus of freed prisoners at the end, Stemme found depth and texture at every turn. She was sly but unwavering in her dealings with the pliable jailer Rocco (bass Kevin J. Langan). She made a listener envision, through the muted terror in her voice and without miming any action, the horror of digging her beloved’s grave. And when she was called upon to make her rejoicing heard through the sonic thickets of chorus, tenor and orchestra, her burnished tone never turned brassy or shrill. Stemme’s expressive powers were as steady and sure as Lenore’s love. Stemme took a disproportionate share of the glory. With Michael Tilson Thomas conducting, this Fidelio often came off as more dutiful than driven.

As it happened, in what proved to be an oddly wayward endeavor, Stemme took a disproportionate share of the glory. With Michael Tilson Thomas conducting, this Fidelio often came off as more dutiful than driven. The pleasures were predominantly backloaded: When a trumpet flourish from the rear balcony signaled the release of Florestan and the other prisoners, setting off the mounting ecstasies, Beethoven’s instinct for grandeur in praise of liberation was on full display. The steps along the way to this frenzied climax were more murkily lit.

After a lithe account of the overture (the leanest of the four Beethoven fashioned), the action, such as it was, got underway. In a curious lapse for a conductor with a strong theatrical impulse, this Fidelio emerged as one of half measures. The singers moved about, sometimes in front and sometimes on a raised platform behind the orchestra, but with little sense of spatial intention or dramatic design.

One of them (the light-voiced soprano Joélle Harvey) carried a score. Jovanovich overacted and left the wonderment of Florestan’s famous second act aria musically under-explored in all his ringing high notes. Langan’s jailer remained a largely monochromatic and overly dry figure, without the poignant shadings the role invites. Bass-baritone Alan Held snarled and preened as the evil Don Pizarro, but seemed to generate his power more with volume than shapely musical cunning. Only Stemme seemed to fully connect to the other principals.

It was the chorus, strangely enough, that got more choreographic attention, both in their striking enactment of the stage direction “The prisoners gradually emerge into the courtyard” and a dynamically unpatterned way of rising to their feet later on. They sang, as always under Ragnar Bohlin’s direction, with a radiant tone. The coordination with the orchestra and soloists, however, stuttered here and there.

Especially in the long first act, the Fidelio concert had a stand-and-deliver feel to it, without the dynamism required. Even with Stemme’s sterling contribution and some spry and sinewy work by the orchestra, the evening progressed without much momentum. Harvey and tenor Nicholas Phan, as her hapless suitor Jaquino, sounded pretty together but lacked urgency. The other ensembles displayed an admirable if uninspired transparency.

It was Stemme alone who consistently lit up the Davies Hall stage. Singing alone or in luminous harmony, she aimed this Fidelio for the heights it otherwise never fully achieved.