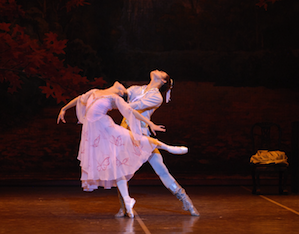 Shanghai Ballet’s The Butterfly Lovers, a four-act ballet choreographed by Xin Lili, the artistic director of the company, mingles western classicism with exquisite Chinese décor and remarkable pageantry; the costumes and scenery that filled Zellerbach’s stage Friday night are to die for. There are tons of tutus, opulent with color, shine, and sparkle; butterfly designs are picked out in rhinestone tracery and echoed on a pink backdrop. There are handsome kimonos and flowing silks. And these dancers, roughly 35 men and women, are great to look at — long-legged, slender, handsome, and beautiful. Just watching them is restful, if you’re not looking for a lot of rousing balletic action.

The Butterfly Lovers, touted as a Chinese Romeo and Juliet, is, ballet-wise, part that and part Swan Lake. Zhu Yingtai (danced by Ji Pingping), from a wealthy family, disguises herself as a boy to be able to attend school. (She doesn’t do much of a disguising job; her pointe shoes are a dead giveaway). She falls in love with Liang Shanbo (Wu Husheng), a handsome classmate who at first rebuffs cute moves in which she tries unsuccessfully to get in his face. Cue the class bully, Ma Wencai (Zhang Yao), who picks on Zhu, beats up Liang when he defends his classmate, and is thrown out of school. Zhu’s father summons her home. Tenderly, Zhu takes care of Liang’s wounds, but it takes a while before he realizes she’s a girl. Her dance in a red veil, Chinese bridal attire, clues him in, and so does a fan she gives him. There follows a surprising fan dance by the men of the corps, whose unison and grace were also quite macho.

Once home, Zhu is forced to wed the bully, a wealthy if nasty scion. Her revulsion is reminiscent of Juliet’s when her parents force Paris upon her; gesturally, though, Ma looks like Swan Lake’s evil von Rothbart. Liang tries to propose to Zhu, but is beaten to death by an army of Ma’s servants.

The next scene is in a white and wintry landscape, where Zhu takes her own life, bourreeing backward as she steels herself for suicide, a steal — a nice one — from Kenneth McMillan’s R & J choreography. All that remains is a gorgeous apotheosis, where Zhu and Liang, as white-clad butterflies with huge wings of pleated silk, are reunited in heaven.

Classical ballet arrived in Shanghai in 1917, when dancers fled the Maryinsky for Shanghai during the Russian Revolution. It flourished during the friendship between the Maoists and the Soviets, and after that cooled off, the ballet turned more distinctively Chinese. This company is the second major troupe after Beijing’s National Ballet of China. Shanghai’s dancers have won 32 titles in international ballet competitions around the world. The company, 36 years old, tours internationally (this two-night Cal Performances engagement, at Zellerbach Hall, was its Berkeley debut) and also performs western classics such as Swan Lake, La Sylphide, and Coppelia, as well as many classical pas de deux and neoclassical ballets.

The Butterfly Lovers, then, is distinctively Chinese by design. An evening with the butterfly lovers reveals the strengths and weaknesses inherent in this east/west mash-up. One of the stunning expressions of distinctiveness is in Zhu’s tiny rondes des jambes a terre, a show of her love for Liang. These little circles of the foot, tenderly brushing the floor below her downcast gaze, allude to olden times, with Chinese emphasis on the sensuality of the feminine foot — in China as in the west part of the impetus toward what became ballet.

Too, we see impeccable classicism in the placement of the body — the arms, the legs — and core strength in one-footed poses such as arabesques and attitudes, as well as power in batterie, which isn’t AA or C, but beating jumps such as sissonnes, royales, and changements. But often the placement looks too placed. Torsos and backs are stiff, shoulders are tight, steps are step-by-step, without flow, and lifts forced and awkward. In all, the movement is as stiffly picturesque, as quiet, as the stunning backdrops whose depictions of lakes in spring and snow in winter are reminiscent of Chinese scroll paintings.

The contemporary score, by Xu Jianqiang, is of no dynamic help. Its influences are all over the place. It’s a schmaltzy olio of western strings and tunes, soprano shrieks, percussive martial rhythms — the fife and drums were of interest — and, on occasion, the balm of a harp’s beguiling glissando.