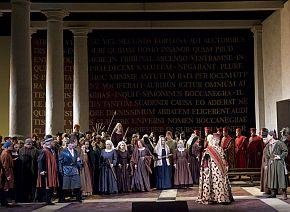 Lisa Hirsch on September 9, 2008
San Francisco Opera launched its 2008-2009 season on Friday with a comparative rarity, Verdi's great opera of reunion and reconciliation, Simon Boccanegra, using the revised version of 1881. This revival, led by outgoing Music Director Donald Runnicles, is blessed with a much better cast than that of the 2001 production. The opening night performance never quite caught fire, largely on account of some weaknesses on the part of two principals and stage direction that ranged from the dull to the exasperating.

Despite its glorious, deeply evocative music, Simon Boccanegra is performed far less often than Verdi's other middle- and late-period works. Even after revisions by Arrigo Boito, Boccanegra has a famously convoluted story line, in which the political tensions of 14th-century Genoa are more important than the love story, and events crucial for understanding characters' motivations are buried in throwaway lines. Why, for example, is Gabriele Adorno part of a plot to assassinate Boccanegra? We learn that Simon, the Doge of Genoa, had Adorno's father killed — but this comes out only after Adorno's second attempt on Simon's life, well into the opera's second act. Moreover, that fact is immediately obliterated by the revelation that Boccanegra is the father of Adorno's beloved fiancée, Amelia. Boccanegra is also short on famous, show-stopping tunes. Only the great aria "Il lacerato spirito" (The tormented spirit) is much recorded or performed outside the context of the opera — and that aria is sung not by Boccanegra, but by his sworn enemy Jacopo Fiesco, father of Boccanegra's deceased lover, Maria, Amelia's mother. Nonetheless, the title role is among Verdi's noblest and most fully realized baritone roles. He's both a tender, loving father and a ruthless politician who is able to finally end decades of strife among the warring factions of Genoa. We see Simon's political skill and vision most clearly in the Council Chamber scene, Boito's longest and most significant addition to the 1857 original. The Doge favorably presents to the councilors a letter from the poet Petrarch pleading for unity among the great Italian states, which were then being torn apart by internecine wars. In this, the 14th century is a stand-in for the 19th-century Italian struggle for unity. Simon then quells a riot among the plebeians, the faction that long ago brought him to power. And Simon's very last action before he dies, poisoned by his closest lieutenant, is to turn over the throne to Adorno, who was born a patrician, thus unifying the factions politically, just as Amelia's marriage to Adorno unifies them socially.

Dmitri Hvorostovsky's darkly handsome voice and liquid production would seem to give him most of the vocal requirements for a fine Doge, and for the last several years the Russian singer has been adding the great Verdi baritone roles to his repertory. "Most," however, is not enough. His top register lacks the bloom and power of a true Verdi baritone, and sometimes he is submerged by the orchestra. This creates problems in the Council Chamber scene, which Simon needs to dominate both physically and vocally. But the baritone spends much of the scene pacing about slowly and stiffly, undermined by director David Edwards. Hvorostovsky's stiffness in the body of the opera is truly inexplicable, given his physical fluency in the quicksilver prologue, set 25 years earlier during Simon's youth. Yes, 50 was getting on in years for the 14th century, but for purposes of effective staging, this man of action needs to be portrayed with some sense of physical potency. Hvorostovsky is best in the gentler, more lyrical passages. The recognition scene, in which Simon discovers that Amelia Grimaldi, daughter of a patrician family, is his long-lost daughter, is as touching as can be, as are the Doge's reconciliation with his enemy Fiesco and the death scene that immediately follows. He's not vocally flawless even when singing lyrically; he almost visibly gathered himself before the soft high F on "Figlia!" (Daughter) at the end of the recognition scene. Both scenes are marred by too much unmotivated wandering around the stage, for which Edwards is surely to blame. That Simon's most intimate scenes work so well owes much to the Italian lyric soprano Barbara Frittoli, making her San Francisco debut as Amelia. Frittoli, a favorite at the Metropolitan and elsewhere in Italian opera, sings many Verdi soprano parts, including the Trovatore Leonora, a role that is normally the province of heavier spinto sopranos. She is a lovely actress: natural, charming, dignified, and youthful without being overly girlish. (Amelia is, after all, 27 years old.) Frittoli's voice is Italianate without being particularly distinctive. She struggled with the long lines of Amelia's taxing entrance aria, "Come in quest'ora bruna" (How in this dark hour), sometimes flatting, her high notes disconnected from the central region of her voice. She had no pitch problems after the aria, though the oddly shallow quality of her upper register persisted. Her attempts to trill in the Council Chamber scene were unconvincing. Also contributing to the excellence of the intimate private scenes is Vitalij Kowaljow, who brings a beautiful, resonant bass to the role of Fiesco. Whether toying with Boccanegra during the prologue or recoiling from Paolo's suggestion that he kill the Doge, Kowaljow is aristocratic in manner and imposing in bearing. Marcus Haddock made an impetuous Gabriele Adorno, singing throughout with ardor and good tone, and, when called for, a fine firm line and excellent breath control. He sobs too much, though, and I wish the costume department would find him an overgarment that looks less as if it came from Goth Night at the high school. Still, what a great pleasure it was to hear a tenor sing Verdi with both passion and technical security. Patrick Carfizzi returns as Paolo, the kingmaker who puts Boccanegra on the Doge's throne, a role whose dramatic importance is all out of proportion to the amount of music he sings. Carfizzi, who chewed the scenery nearly to shreds during his single 2001 appearance here as Paolo, has greatly refined his portrayal. It's far more insinuating, more driven by jealousy and resentment, less a cartoon villain. Carfizzi's biography lists an interesting combination of small and larger roles; his vocal security and dramatic flair suggest both Scarpia and Iago in his future.

The sets remain much as they were in 2001, serviceable without any special distinction. Though the stage direction thuds, the production has mercifully shed a few embarrassing touches. Gone are the figures of Verdi, the patrician Lorenzino, and Amelia's deceased mother, Maria; no longer is Boccanegra enveloped in a giant swath of blue cloth representing the sea. The wall of columns on the left-hand side of the stage remains, as does the diagonally bisected wall that represents two different palaces — and that wall no longer descends to crush Paolo at the conclusion of the Council Chamber scene. One early bit of stage business deserves to be described, for its ludicrousness: the moment when the director interprets Boccanegra's first utterance, "Un amplesso" (An embrace), to mean "Boccanegra puts his ally Paolo in a friendly headlock." Despite this lapse, the rest of the prologue is effectively staged, helped along by the propulsive nature of the action and the stark contrast between Simon's simultaneous personal despair and political triumph.

Donald Runnicles arrived at San Francisco Opera in 1992 already a magnificent Wagner conductor, and one of the pleasures of his tenure has been his steady growth in the Italian repertory. On this particular opening night, he gave a supple, expansively paced reading of Simon Boccanegra, one that was notable especially for the gloriously transparent orchestral sound, which enabled the listener to hear every detail of the score's riches. Highlights included the short prelude to the prologue, and the long introduction to Amelia's aria, so marvelously evocative of the sea and rising sun (though the latter's slow pacing probably contributed to Frittoli's pitch problems). Runnicles took "Perdon, Amelia," Adorno's aria of apology and self-loathing, more slowly, and more intimately, than usual, and it was correspondingly more heartfelt and affecting. All and all, despite the problems, this was a satisfactory and moving performance of a great score. I attribute most of the issues to opening night nerves and the normal challenges of melding singers into an ensemble. The balance of the run will likely be more satisfactory. Some problems can only be solved by more effective staging that better supports the singers and the drama. Perhaps the next production will feature a director other than David Edwards.