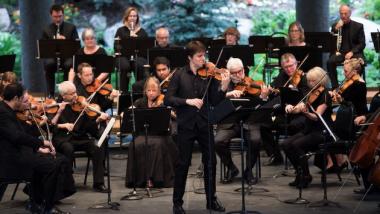 The clocks gave us an extra hour of daylight on Sunday, and the early evening concert at Davies Symphony Hall felt like a matinee, full of energy and yet at ease. The English chamber orchestra Academy of St Martin in the Fields, with leader and solo violinist Joshua Bell, played works by Mozart and Beethoven with a kind of quiet excellence that made these familiar works a joy to hear again.

Mozart’s Violin Concerto No. 4 in D Major is played everywhere, from grade-school auditions to grand concert halls every season. Must each performance have a new point of view? I don’t think so. There’s the most room for new ideas in the cadenzas and in the last movement’s Eingänge (lead-ins); Bell played ones that were, in the old way, significantly more virtuosic and harmonically forward-thinking (with prolonged double-stopped 7ths and exaggerated, Tchaikovsky Concerto-quoting semitones) than the piece itself. It’s a matter of taste, and if Bell came to show us some tricks, he accomplished it.

Other than those little spots, it was a conventional performance — in a good way. The first movement was always singing and light, and the slow movement, which seemed to come out of the same breath, utterly delicate. Elegance in the recurring Andante grazioso and boisterousness in the Allegro’s fast runs were perfect complements that played up the operatic quality of the Rondeau finale.

Edgar Meyer’s new work, Overture for Violin and Orchestra, was as meticulously characterized in performance — if not particularly striking in content. This gentle, unassuming music could be the Intermezzo in a four-movement concerto, but alone, feels like an orphan.

The short work, which was co-commissioned by the Academy and Bravo! Vail, premiered last summer in Vail. It opens with murmuring triplets (finely pronounced in the orchestra on Sunday) that alternate with lyrical solo episodes. Gradually, the music takes shape, combining melodic orchestral textures with a kind of moto perpetuo in the solo line. Metric patterns shift in unexpected ways, yet every idea seems to come back in a way that’s expected.

In an interview about the commission, Bell described his own musical tastes as conservative-leaning, and he’s not wrong: The piece sounds a bit like a mellowed-out version of the last movement of the Barber Concerto (the 1939 work that, when Meyer wrote a violin concerto for Hilary Hahn, formed the other half of the resultant album). In this sense, Meyer delivered a success, but the piece is essentially a vehicle for Bell to play a solo that turns out less meaty than a proper concerto, and the orchestra rarely plays more than an accompanying role.

Not so in Beethoven’s “Pastorale” Symphony. Here, the ensemble’s finesse was allowed to shine in full force. From the opening notes, the balance always cleared the way for the seamless trading of motifs, and the second movement flowed beautifully; there was nothing careful or calculated about this sleepy brook scene. The wind solos here and throughout the program were all top-notch, but the clarinet (Fiona Cross), in particular, had a wonderfully pure tone. And in the third movement, the horn solo (Stephen Stirling) was impossibly light, gentler even than all the solos before it.

But excitement never lacked, either — not in the boisterous duple dance, nor in the fourth movement’s thunderstorm. The strings’ chromatic lines came to sharp points, and their churning sixteenth notes — and even the lower strings’ impossibly fast scales — were a force. The Finale’s choruses were rousing, and its quiet moments simple. This uncommonly sunny work should always be played so collaboratively and merrily; the musicians seemed enthusiastic (indeed, these Brits allowed themselves to wave to audience members from the stage) and I hope to see them return.

Joshua Bell in a Box

A new collection of sound samples provides a way to access the violin virtuoso from the comfort of your own computer.

The chamber orchestra and pianist Jeremy Denk unite for a memorable performance.

Joshua Bell Needs a Baton to Go with His Bow

The Academy of St. Martin in the Fields fielded a great soloist on Sunday, but missed a conductor’s attention.