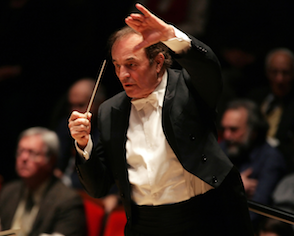 Every now and then, the San Francisco Symphony puts on a program apparently designed to show off the glorious Symphony Chorus, sounding better than ever under Ragnar Bohlin. This week's Poulenc and Berlioz extravaganza, led in masterly fashion by guest conductor Charles Dutoit, is one of these occasions.

SFS's John Mangum, director of artistic planning, has long dreamed of putting on Berlioz' Te Deum (We praise thee), a gigantic and demanding work that until this week, had been performed only once by the Symphony, nearly 40 years ago under then Music Director Seiji Ozawa. You can't tell from the preview whose idea it was to put Poulenc's lovely Stabat Mater on the program with the Berlioz, but praises be, it was an inspired, and winning, pairing.

The Stabat Mater, never heard before at SFS, is something of a stylistic chameleon, like much of Poulenc's music. Its 12 short movements run the gamut from stark, almost-medieval a cappella polyphony to pastoral lightness and even a slightly insouciant jazziness. Poulenc's musical command, utter seriousness, and religious sincerity — he was a devout Catholic — keep the piece from ever cloying.

Even in the mostly richly orchestrated sections, the chorus soars over all — or underpins all, given the Stabat Mater's bottom-weighted SATBB choral division, as in the opening "Stabat Mater dolorosa," where the lower-voiced male singers enter almost stealthily. The chorus sang with liquid transparency throughout the 35-minute work, with an especially lovely float to "O quam trista" (How sad and afflicted). The transparency stood it well during the austere "Fac, ut ardeat" (Make my heart burn) and in the passionate outburst of the "Cujus animam gementem" (Her grieving heart).

Soprano Erin Wall sang the three short soprano solos. Her voice is not particularly distinctive, nor was her approach. She was at her best floating beautifully at the top of her range but seemed to lose vocal focus when the musical line descended into her middle voice.

While the Symphony Chorus's tone and line were consistent marvels, their diction unfortunately was not. Sometimes every consonant and every word were crystalline, sometimes you wondered what language they were singing in, a startling lapse that persisted through the Berlioz.

Overwhelming in contrast to the Poulenc's understated restraint, the Te Deum makes a superb concert companion for the Poulenc ... rather like watching a long and glorious procession.

Anyone hearing the Te Deum for the first time has to wonder whether Gustav Mahler knew this music. From the huge forces Berlioz calls for to the unusually prominent organ part to the children's chorus, the Te Deum calls to mind Mahler's mighty Eighth Symphony. Early performances of the Te Deum had from 750 to a thousand or so performers, not unlike Mahler's Eighth. At a mere 45 minutes, though, the Te Deum clocks in at half the length of the Eighth, and these performances had to be content with the normally large Symphony Chorus rather than a greatly enlarged complement of singers.

Hair-raisingly majestic, very much the church militant in spirit, a bit rough-hewn where the Poulenc is suave, overwhelming in contrast to the Poulenc's understated restraint, the Te Deum makes a superb concert companion for the Poulenc. Hearing it is rather like watching a long and glorious procession, an extremely operatic procession, stride gradually past you. It gets off to a roaring good start in the "Te Deum laudamus," rather like a rocket launching into orbit, and continues at a high emotional pitch through to the end, where many repeated statements of "In te Domine speravi" (In you, Lord, we trust) throughout the chorus finally bring the work to a close. Organist Jonathan Dimmock also performed heroically. His voicings and playing were imposing without overwhelming the orchestra or singers.

Even in moments of repose, such as the gorgeous and tender "Sanctus," there's plenty of drama — and Dutoit brought the "Sanctus" itself to a breathtaking climax. Like Poulenc, Berlioz sometimes writes in a slightly archaic-sounding counterpoint, and sometimes with a rather Beethovenian cragginess, as in the "Christus Rex gloriae" (Christ the king of glory). The chorus sang with complete musical and sonic confidence and sounded perfectly glorious. Would that it had been clearer where the division was among the two adult choruses called for by Berlioz, but perhaps this was not logistically possible.

This is a work that could easily turn into a sonic mess without careful handling. By and large, Dutoit did a splendid job of marshalling and especially balancing the forces on stage. The orchestra, complete with extra brass, quadruple wind, and four or five pairs of crash cymbals, never overpowered the chorus, even at triple forte; neither did the very large chorus blunt or cover the orchestra. Berlioz' beautiful wind writing, especially in the "Sanctus," was always audible; the brass wall-of-sound came through without drowning the rest of the orchestra. Getting this right in Davies Symphony Hall is not easy, though it is true that the children of the Pacific Boychoir were more of a nice sheen above the adult chorus than anything else.

Two performances of these marvelous choral rarities remain, on February 9 at 8 p.m. and February 10 at 2 p.m. Tickets are still available, so get them while you can!