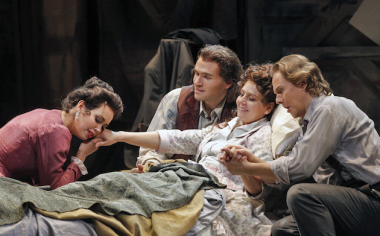 A Tale of Two Bohème's

But first, kudos to the Opera management for its consideration of audience comfort. This four-act opera is usually performed with two intermissions, just a scene change before the very short second act. But for the first time in SFO history on Friday, La bohème was given with one intermission only.

With a total running time of 2:20, the customary 8 p.m. starting time was moved up to the "European" 7:30 p.m. (for the whole season). The opera ends before 10 p.m. — plenty of time for a lengthy ovation, and nobody needs to rush out to catch the last BART train. No cuts have been made to the music.

Citing opera history is significant in this case of the melody-drenched work that's the most performed, most popular opera in the world; its story recreated in the rock opera Rent, and the music inspiring any number of Andrew Lloyd Webber megahits, each dwarfing Puccini's lifetime income.

Bohème domination applies to S.F. Opera as well: It was the company's 1923 debut in the Civic Auditorium (nine years before the opening of the War Memorial), followed by dozens of productions and 229 performances, putting it in the No. 1 position here, too. (Followed by two other Puccinis: Butterfly, 204, and Tosca, 174, before Bizet's Carmen, 162.)

David Farley's design for this co-production (with Houston Grand Opera and Canadian Opera) is simple, appealing, functional, very much in service of quick scene changes without lowering the curtain. In addition to a few objects on stage (tables, chairs, a bed), the sets consist of period paintings of Paris — supposedly by Marcello, the painter among the Bohemians — suspended upstage, a new set lowered as the old one is raised into the flies. John Caird's direction follows traditional performance practices, with a few variations that add a bit to the drama.

There are numerous dropouts in the English supertitles, not translating brief passages that don't need explanation and some that may create laughter that management is obviously trying to prevent so it won't interfere with the music.

Of the two opening nights, the first was different and superior. Under Finzi's baton, the orchestra roiled, sang, and pulled a great ensemble performance in its wake. It was all in the service of the music, no individual star performances or anybody belting out an aria.

The next night was more conventional star vehicle for individual singers, the orchestra following more than leading. Chances are different energy, different sound will alternate often during the long run.

When speaking of the current double-cast production, I will resort to the awkward Friday/Saturday distinction, referring to the casts opening on Nov. 14 and 15, respectively, to avoid the A/B cast designation, which sounds somewhat judgmental. Once upon a time, there were really significant differences between the "international" A cast and the less distinguished, predominantly local B group, but this time, there is no such dividing line.

The Bohemians' solid ensemble consisted of Russian baritone Alexey Markov, in his San Francisco debut, as Marcello; Christian Van Horn (a busy bass-baritone in the house this season) as Colline; and Adler Fellow Hadleigh Adams from New Zealand as Schaunard. Van Horn and Adams sing in both casts.

Former Adler Fellow Nadine Sierra's Musetta fell somewhat short of high expectations. Although looking sensational — willowy and elegant — Sierra moved with a strange angularity and, more importantly, her voice appeared thin, not quite filling the house. It may be that smaller venues fit her better.

Regardless of different energies and approaches, the gorgeous La bohème is alive and well in the War Memorial.

The Opera Chorus doesn't have much to do in this opera, but combined forces from the S.F. Boys Chorus and S.F. Girls Chorus had their big moment in the Latin Quarter scene, providing the musical backbone to the holiday celebration.

In the Saturday cast, Merola/Adler veteran Leah Crocetto, who now has major roles in U.S. and European venues, sang big, but more to the audience than to Rodolfo, the debuting Italian tenor Giorgio Berrugi, whose voice production is not transparent, but quite successful. Some squeezing and effort was audible at first, but high notes came through, and there is unquestionable musicality in his performance.

Ellie Dehn's Musetta looked and sounded appealing; observing Musetta's appearance is not sexism, it's an important part of the role. Brian Mulligan as the Saturday Marcello impressed with both voice and stage presence.

Veteran singer Dale Travis is once again outstanding in the buffo double role of the landlord Benoit and Musetta's sugar daddy Alcindoro in both casts.

In the pit, Laura Albers has moved up to the first chair from her usual place as Associate Concertmaster. Principal violist Sergey Rakitchenkov's solos and his wife Olga, on harp, were notable. Principal clarinetist Jose Gonzalez and Patti Niemi on glockenspiel shone.

Regardless of different energies and approaches, the gorgeous La bohème is alive and well in the War Memorial.