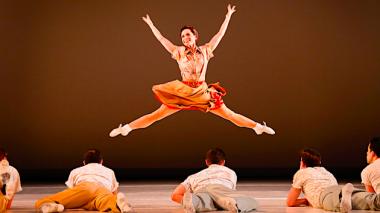 The Paul Taylor Dance Company is playing San Francisco through Sunday in its first visit since its namesake’s death in 2018.

Paul Taylor rarely came to San Francisco from the company’s New York home; I saw him here twice in 20-odd years and it seems to me that once he even took a bow. But the passing of a great founder, at home or away, creates major ripples throughout the dance community. So it was good to feel an air of continuity as Taylor’s handpicked successor, former Taylor dancer Michael Novak, did a brief post-show Q&A Wednesday night at Yerba Buena Center for the Arts.

The show, presented by San Francisco Performances, began with a brief film-clip tribute showcasing vivacious snippets of ballets from the master dancemaker, who died at 88 in August 2018.

Although the program was supposed to begin with Company B, it opened instead and inexplicably with Concertiana, a pleasing work from early 2018 that draws most of its oomph from being Taylor’s final creation for the company he founded, in 1954.

That gave Concertiana, set to music by Eric Ewazen, with costumes by frequent collaborator William Ivey Long, a powerful if ready-made aura of nostalgia. It danced through a ramble of characteristic Taylorisms: strong backs for swift and close-partnered lifts, runs into the wings and back again, seated floor-paddles across the stage using arms as oars, tidy one-legged balances, quick and perfect airborne turns. The dancers wore leotards of oceanically striped dark blue, evoking the passage of time and the presence of eternity, especially in the final moments, when red-haired Heather McGinley raised her arms and stretched out as if facing the sea, luxuriating in endless solitude — soon to be broken. Rejoined by the other 10 dancers, the gang pyramided into a tight family beach portrait, grinning engagingly at the audience as if to say “Hi, we’re still here!” Knowing that Taylor created that happy valediction too gave it another poignant little punch.

Paul Taylor was always good at that — wonderful, truth be told. The next ballet, the marvelous 1991 Company B, accentuated both the fun and the punches. To an Andrews Sisters song medley in a World War II time frame, the 13 dancers, boyish and girlish, kicked up their heels. It was a good chance to check out the dancers individually. Many — roughly half the company of 16 — are relatively new (the troupe, sadly, only hits YBCA every two years now) and all are great to fantastic.

Standout solo turns came from John Harnage in “Boogie Woogie Bugle Boy (of Company B),” Eran Bugge, with the men of the cast, in “Rum and Coca-Cola,” Alex Clayton in “Tico-Tico,” and Heather McGinley and Michael Apuzzo in “There Will Never Be Another You.” That one’s perhaps the gut-punchingest of all, for the combination of the lyrics, the romanticism, the sense of loss, and the moments, prevalent here as throughout the piece, when young men, first seen silhouetted, brave and strong as they march across the backdrop, are shot, crumple up, and die. Here it’s accentuated, in that the man who made this happy, tender, angry dance will not be coming back either. Frankly, it felt lousy.

But of course he will be back. Paul Taylor’s dances — in all, slightly shy of 150 — will comprise the company’s repertory under the stewardship of rehearsal directors Bettie de Jong and Andy LeBeau. So will new works by rising modern choreographers, handpicked by Taylor and now by Novak. At home base, the company’s new, wider umbrella has the name Paul Taylor American Modern Dance.

Esplanade (1975) ended the show. It’s as much a beloved closer in Taylor world as Revelations in Alvin Ailey’s.

Set to Bach violin concertos, it’s an enduringly brilliant dance, made, as many have noted, without a single official, i.e. nameable, dance step. It’s all light, all dark, all motion. It soars, pounds, and floats. It explores love and alienation. It feels like pure dance, but it’s pure energy and pure humanity. Its orange glow is from John Rawlings’s costumes and Jennifer Tipton’s lighting; the rest, enacted by the dancers who live and breathe his work, is crafted of the bravest, purest, most-poetic Taylor.

So that’s it. You don’t have to miss him. Just see him.

Paul Taylor Did It All

Despite one error in the middle innings, the venerable troupe brought it home with a grand slam.