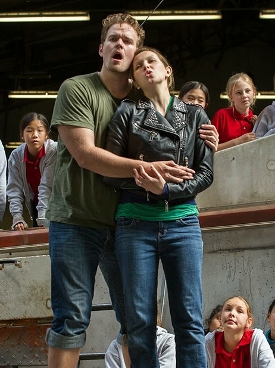 Another impressive set of performances from the Opera Parallèle team: A great deal of hard work prior to and during rehearsals paid off on Friday at the Yerba Buena Center for the Arts with a manifest professionalism that cannot but add to Parallèle’s growing international reputation. And two unusual and worthy works were brought to the fore. But why take composers that generate unique musical universes that cry out, “Listen to me; I have something special to say,” shoehorn a third concept onto them both, dress one in the clothes of the other, and have them shout from the same platform?

Kurt Weill’s Mahagonny Songspiel was forcibly mated with Francis Poulenc’s Les Mamelles de Tirésias under the leadership of conductor and Artistic Director Nicole Paiement and Concept and Stage Director Brian Staufenbiel. The result was a dish that seemed to this reviewer to be hard German pretzels imprisoning French whipped cream. Tastes for this concoction may vary. Any two entities have something in common. After all, we all have atoms and electrons. Weill’s Songspiel and Poulenc’s Mamelles were responses from the results of war-torn Europe. The devastated German social structure hyperinflation of the 1920s informed Weill’s collaboration with Bertolt Brecht. The depopulation of France in both wars is reflected in Guillame Apollonaire’s surrealist 1917 libretto that Poulenc set to music during World War II.

According to Staufenbiel, the justification for combining these works is that they “share a thread of social commentary.” Paiement emphasizes that both texts come from great “thinker/poets” and that the music “integrates popular idioms … and tuneful melodies.” Yes, and a tiger and a lamb both have hair, but are different beasts altogether. Poulenc’s music is an absurdist frappe of impossibilities and light vaudeville; Weill’s a thick and dissonantly harmonized, viscious condemnation of avarice, exploitation, and romanticism.

Unfortunately, the Weill/Brecht tone becomes the basis of what Staufenbiel calls “our new übernarrative” that combines the presentations in a post-apocalyptic world of environmental devastation. The Poulenc opera in this concept becomes an opera in an opera where the celebrated (if somewhat laughable nowadays) need to repopulate the world becomes de-civilizing famines created by overpopulation. Characters dressed in rags, singing the words from Weill’s Songspiel cantata numbers, haul a boat on wheels through a desert from one Mad Max village and disappointment to another. Finally, they stop at yet another disasterville and perform Poulenc, in only slightly more cheery costume. This is supposed to inform the destitute folk how the world got to be so bad. A creation myth? Then, to more echoes of the Songspiel the troupe drags their boat off into the sunset as flames appear on a scrim. Whether the flames were referring to Götterdämmerung or to the Tiresias Fire Sermon in Eliot’s The Waste Land wasn’t clear.

Misguided concept aside, Paiement brought forth some outstanding artistry from the stage of the Lam Research Theater at the Yerba Buena Center for the Arts Friday. Soprano Rachel Schutz excelled as Tirésias. Baritone Gabriel Preisser charmed as her oafish husband. Tenor Thomas did well in his several roles, as did Daniel Cilli, Aleksey Bogdanov, and Renee Rapier in theirs. The reduced orchestration, unlike the übernarrative, did nothing to damage the music. The San Francisco Girls Chorus and the Opera Parallèle Chorus and Resound Ensemble were a joy to hear. Their costumes would work well in Oliver!

Such excellence is to be anticipated in future seasons, whatever Paiement and Staufenbiel have in mind. Perhaps a combination of Puccini’s Gianni Schicchi and Schoenberg’s Erwartung?