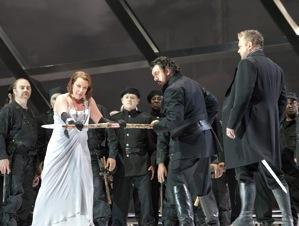 The Ring on Record

There is one Ring recording almost every Ring lover agrees is a first choice.

Francesca Zambello’s production of Richard Wagner’s epic Der Ring des Nibelungen (The Nibelung’s Ring), years in the making and never completed at Washington National Opera, has finally had a full production at San Francisco Opera. Magisterially conducted by Donald Runnicles, the company’s much-loved former music director, with a mostly stellar cast that delivers a powerfully integrated dramatic whole, it’s a triumph for Zambello, the cast, and the company.

The current publicity materials do not call the production the “American Ring,” but Zambello’s essay in the program discusses her use of American, and specifically Californian, imagery in the production and as a source of inspiration to her. She states as her overarching themes the quest for power, the destruction of nature, and, of course, the intense family interactions that drive so much of the story.

What her notes don’t say is that this Ring is also explicitly feminist. Brünnhilde, redeemer of the world, is the hero of the story, as she is in any complete Ring cycle. Zambello stages the fiery climax of Götterdämmerung to add several other female characters to the redeemer, or perhaps rebuilder, role. In addition, she locates her Ring in specific, identifiable eras of human history rather than in the mythic past of Wagner’s libretto, from the recent past to a dystopian near-future.

How well does all this updating and interpretation work? For the most part, quite well, though some of the anachronisms and additions are unnecessary or overly heavy-handed, or shift the tone away from that set by the music. We get Zambello’s point about despoiled landscapes by the second or third video covering a scene change, so the fourth and fifth pall. The TV remote used twice during Hagen’s Watch induces audience giggles during what should be a shiver-inducing encounter. The Norns are green-clad clean-room technicians handling a jumbled mass of computer cabling, a visually distracting contrast to their gravely beautiful music. And does the athletic, teenaged Brünnhilde really need to be carried around piggyback by her mighty father?

Zambello’s Rheingold opens in the mid-19th century, during the California Gold Rush. The dwarf Alberich — the titular Nibelung, here a miner in overalls — is played by Gordon Hawkins, an African-American bass-baritone. At a panel for music critics during the first cycle, Zambello mentioned that the majority of the Nibelungs over whom Alberich rules are played by African-American, Hispanic, and Asian-America children. In casting an African-American singer, the director’s intention is to draw parallels between Wagner’s racial hierarchy, where the gods, giants, dwarves, and humans occupy different social strata, and America’s shameful history of slavery.

By the second scene of Rheingold, we’ve arrived in the early 20th century. Wotan, king of the gods, is a plutocrat who has hired the giants Fafner and Fasolt to build his fortress. His fellow gods and goddesses are frivolous and fun-loving, the giants none-too-bright working men, and Loge, the demigod of fire, is Wotan’s fixer, or perhaps lawyer. At the end of the opera, the Rheinmaidens, who were previously dressed in bright-gold costumes, are clothed in ragged, brown gowns, reflecting the loss of the gold and their process of maturation.

Judging by the costumes, particularly the Valkyries’ flight suits, Die Walküre is set in the 1920s. Valhalla is the skyscraper we glimpsed in a projection at the end of Rheingold, and much of Act 2 takes places in a conference room. This isn’t the first Ring to focus on capitalism and its effects, but there’s little explicit about this aspect of the production after Walküre, other than the decay of the natural landscape.

Certainly, some dramatic oddities result from the updating, because there’s simply no way to get away from the sword Nothung and Wotan’s spear, which are fundamental to the story and associated with specific musical themes. Hunding’s house is full of guns, but he and Siegmund still fight with swords.

Siegfried the Most Unified Opera in the Cycle

To my surprise, because it’s so widely considered a “problem opera,” Siegfried stands as the most unified and dramatically satisfying opera of the production. Placed in an urban setting, instead of in a forest, Siegfried wears its eco-awareness lightly. We feel oppressed by the junkyard where Siegfried and Mime live, in a trailer under looming power lines, and by the decaying warehouse where Fafner the dragon sleeps and Alberich lurks, though the production doesn’t underline these points.

Siegfried also contains a pair of Zambello’s most delightful and telling details. Nothung’s shards are wrapped in a remnant of the turquoise dress Sieglinde wears in Walküre. After Siegfried reforges the sword, he wears the fabric as a scarf, a veritable talisman of his mother, and one that creates a powerful visual connection from Walküre to Siegfried to Götterdämmerung. Charmingly, the Forest Bird is incarnated as a young woman, singing directly to Siegfried from a catwalk, observing him, and finally leading him from the decaying city back to nature and to his intended bride.

When we come to Götterdämmerung, we find the Gibichung siblings living in a modern, glass-and-steel house, through the glass walls of which we can see only industrial equipment and a sickly, polluted sky. Zambello takes an unusual tack with Gutrune, sister of Gunther and half-sister of Hagen, Alberich’s son. Rather than the typical earnest innocent enamored of the heroic Siegfried, Zambello gives us an ambitious, apparently none-too-bright, blonde beauty in a seductive dress. It works, and, combined with Gunther’s weakness, emphasizes the extent to which Hagen dominates the family.

Götterdämmerung’s wedding and oath scenes, both in Act 2, are stunningly staged, in a hangerlike structure and with a show of militaristic might from the family’s vassals, all under Hagen’s direction. Zambello has said that movies greatly influenced the visual tropes of the production, including Citizen Kane and James Dean’s films. This scene, with its black-clad vassals, looks as though it came straight out of Star Wars. The hunting scenes of Act 3 put Siegfried, Hagen, and Gunther in safety-orange uniforms, with the vassals in camouflage. Again, the anachronisms strike: Why have we seen plastic bottles, car parts, and automatic weapons when Siegfried is killed with a spear and hauled back to Gibichung Hall on a wheeled pallet? Doesn’t the family own a Hummer, or at least a pickup?

The Immolation and the close of the opera are staged in a problematic fashion, because Zambello invents a great deal of action and spells out far too much for the audience. Brünnhilde and Gutrune, united in love for Siegfried (and both victims of Hagen’s plotting), hug and become allies. They’re joined by the Rheinmaidens, who emerge from the river to dump Siegfried’s body after dousing it with gasoline, and then by all of the vassal women. Instead of dragging him under, the Rheinmaidens smother Hagen with a plastic bag. At the very close, a young girl emerges from the river and plants a sapling at the front of the stage.

Wagner’s Music and Libretto Alone Can Carry the Day

In the abstract, I like the idea of all women as redeemers, but in the context of the Ring cycle, it’s just too much Kumbaya for me. We don’t need the sapling to show us the rebirth of the world when we have Wagner’s music, in which we hear the redemption motive for its second and last time. We don’t need a great deal of invented action, either, because Wagner’s libretto provides sufficient action to cover the long orchestral coda.

All this said, the strengths of the production far outweigh the quibbles. Zambello’s direction of the principals is, by and large, psychologically acute; the cast is dramatically strong, and so is the preponderance of the singing. The orchestra, marred in Rheingold and Walküre by occasional flubs in the brass, played like gods for the last two operas. Donald Runnicles provided masterly pacing and balance and the greatest care for the singers, never drowning them for the sake of volume; the orchestral interludes were thrilling and, when needed, overwhelmingly powerful (as in Siegfried’s funeral march) or delicate (Forest Murmurs).

We’ll never see a more scene-stealing, sly, and brilliantly sung Loge than that of Stefan Margita, who got the biggest hand at the close of Rheingold. Elizabeth Bishop’s complex, wounded, and beautifully sung Fricka stands far above the mass of one-dimensional shrews. Mark Delavan’s Wotan was still a work in progress as of the first cycle, the bass-baritone’s first complete account of the role and understandably sung with some caution. He was at his best in Siegfried, and was very good indeed. Gordon Hawkins’s soft-grained voice seemed unable to express Alberich’s malevolence, and his portrayal was comparatively flat as a result, though it, too, improved over the course of the cycle. Gerd Grochowski sang and acted well as Donner and Gunther.

In his role debut as Siegmund, Brandon Jovanovich showed immense promise, only intermittently realized. His voice is absolutely the right weight and timbre for the role, and perhaps for Siegfried as well, but he shouted for emphasis far too often, marring the line when he should have just been singing. Anja Kampe was a lovely and fragile Sieglinde. Andrea Silvestrelli’s tender Fasolt and scarily dominant Hagen were highlights, while Daniel Sumegi’s constricted and buzzy bass was among the few weaknesses in the cast. Melissa Citro looked great as Freia and Gutrune, but her acid upper register was out of character for both roles. David Cangelosi was a vivid Mime. Kudos to the fine Rheinmaiden trio of Stacey Tappan (who was also the wonderful Forest Bird), Lauren McNeese, and Reneé Tatum, and to Norns Ronnita Miller (also a resonant Erda), Daveda Karnas (an outstanding Waltraute), and Heidi Melton.

The production lucked out in its Siegfrieds, with Jay Hunter Morris taking the younger and Ian Storey the older. Morris is right for the part in much the same way that Nathan Gunn is right for Billy Budd. He has a loose-limbed openness and joy that keep the character from becoming tiresome, and he sings the role in a wonderfully lyrical style, never shouting or forcing. Storey’s darker voice suited the older Siegfried well and he sang the role ably, with a fine heroic ring. The two tenors are remarkably similar in height and build, making a seamless transition from Siegfried to Götterdämmerung.

Above it all, Nina Stemme triumphed in her first complete Brünnhilde, turning in a passionate and remarkably athletic portrayal sung with a ruby-toned sword of a voice, transforming herself before our eyes from the youthful warrior maiden of Die Walküre to the shy lover of Siegfried and the wise world-redeemer of Götterdämmerung. She got the first bow, alone, at the end of Götterdämmerung, and deserved every bit of the long standing ovation that followed.