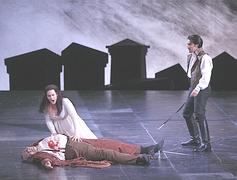 The Triumph of the Impossible

Lisa Hirsch on June 5, 2007
In a program note written for San Francisco Opera some years ago and republished in his book The Ultimate Art, David Littlejohn called Don Giovanni "The Impossible Opera." He went into some detail about the reasons the work is so difficult to stage effectively. He called attention to the demands on Mozart by the original singers, which resulted in more scenes and arias than the basic plot requires, the speed with which Da Ponte wrote the libretto, the implausibility of certain plot points, and the difficulty of balancing the comic aspects of the work with the serious. San Francisco Opera's brilliant new production, heard at the first performance on June 2, handily overcomes these issues. From a theatrical standpoint, it's a triumph for all concerned, emphasizing the tragic elements and neatly blending in the lighter episodes. This is the most convincing Don Giovanni I have seen. The production, which is shared with the Théâtre Royal de la Monnaie in Brussels, is the first at San Francisco by David McVicar, with designs by John Macfarlane. Instead of mid-17th-century Seville, the opera is set in the early 19th century. The characters wear handsome Empire gowns, morning coats, waistcoats, and tight trousers, not ruffles and doublets. A unit set, in shades of black and gray, uses walls moved around the stage or flown in to represent the exterior of the Commendatore's house, Don Giovanni's palace, and other locations. The front of the raked stage is crumbled and ragged, revealing that it's built atop rubble and human bones. A drop looking like a stormy sky painted by J.M.W. Turner looms over the back of the stage. In front of the drop, distant architectural forms grow larger during the course of the opera and resolve themselves as tombs in the graveyard scene.

But the sets and costumes don't make the opera. Sensitive direction, good singing, and good leadership do. And in Leah Hausman, directing in San Francisco for the first time, the Opera has a major find. The action is well-staged, lively, and designed to give each singer a characteristic style of movement. Mariusz Kwiecień swaggers as Don Giovanni, readily dominating his social inferiors. It's easy to see the tension in Luca Pisaroni's Masetto, as he struggles to stay contained while clearly jealous and angry about the interplay between Don Giovanni and Zerlina. Donna Anna and Don Ottavio carry themselves nobly. Hausman's direction was also finely detailed without being fussy. In the wedding scene, while Don Giovanni is making his first attempt on Zerlina, Leporello pinches one of the guests and drinks her beer after she leaps up, startled. On the other side of the wedding feast, he casually eats an apple, then, when the wedding party is herded off-stage toward Don Giovanni's palace, he scoops up a straggling child and follows. All the action in the scene is completely natural, with plenty of byplay among the guests, and that is typical of the direction throughout. Most important, Hausman consistently maintains the opera’s dark tone. Comic elements become sardonic asides rather than the focus and never devolve into slapstick. Her treatment of Masetto, Zerlina, and especially Leporello is crucial. Oren Gradus' Leporello is the perfect foil to Kwiecien's Don Giovanni. Gradus always maintains his dignity, even when he's terrified in the closing scenes, never becoming abjectly servile or, worse, a buffoon. Claudia Mahnke's Zerlina is young and charming without simpering, and Pisaroni's Masetto knows his place but does not lapse into caricature. With the comic elements kept in check, the essential tragedy of Don Giovanni and the effects of his amorality on those around him come to the fore. In too many productions, the comedy is overdone to the point that Donna Anna and Don Ottavio seem out of place, but not here. The Commendatore’s death leads naturally to Don Giovanni’s. This production is also lucky enough to have singers who can meet all the theatrical requirements and, by and large, most of the vocal requirements.

Mariusz Kwiecień's Don Giovanni is menacing, amoral, and so magnetically attractive that it's surprising he has so little success at seduction during the course of the opera. (Perhaps Don Giovanni's just having a bad day, what with Donna Elvira’s multiple interruptions and her own determined pursuit of him.) Kwiecień, like Nathan Gunn, seems to have inherited the Ramey mantle; his personal Web site features many photos of him bare-chested and in tight pants. He's certainly the first Don Giovanni I've seen who I thought had a prayer of bedding the ridiculous number of women he claims to have conquered. But you can't just strut your way through this role, and fortunately Kwiecień is a real singer. He brings a beautiful, well-focused, and well-projected baritone to the role, whether singing seductively or with swagger. He occasionally aspirates, and some of the higher music doesn't lie quite right for him. In compensation, he trilled during the Act 1 finale. A Don Giovanni as magnetic as Kwiecień needs an appropriate foil, and Merola graduate Oren Gradus makes an ideal Leporello. He's slyly droll in a casual, offhand manner throughout the evening, with suitable backbone when he stands up to his master. Gradus sings with plenty of character and color, and does a fine job of darkening his voice in the scene where he switches clothing with Don Giovanni. Charles Castronovo, heard here most recently in The Pearl Fishers, seems a changed singer in the last two years — and all for the better. His voice is smallish, though dark, vibrant, and perfectly placed. He didn't have the breath control for an ideal account of "Il mio tesoro" (Console my treasure), but time stood still during a breathtaking "Dalla sua pace" (On her peace of mind). Kristinn Sigmundsson was brave and scary, by turns, as the Commendatore. Luca Pisaroni was fine as Masetto, without being especially individual in his approach.

Vocally, the women didn't fare as well as the men. Much interest was focused on Elza van den Heever, who made her main-stage debut as a last-minute replacement for Hope Briggs. Van den Heever showed a huge voice of considerable range, rounded and resonant throughout and with special warmth in the middle and bottom. She has plenty of promise, but that big voice isn't under sufficient control yet; at this first performance, she was too loud in some ensembles and faltered toward the end of "Or sai chi l'onore" (Now you know who sought to steal my honor) She needs more schooling in passagework, as well, to smooth out the fast section of "Non mi dir" (Do not say to me). Yet she cuts a fine figure on stage and acted well, even though she must have learned the staging in a tearing hurry. As Donna Elvira, Twyla Robinson looked great, especially when making her entry in trousers rather than a dress, and sang and acted with verve. Still, her tone turned wiry or shrill too often, and "Mi tradi" (The ungrateful soul betrayed me) got away from her a couple of times. I am not a fan of mezzo-sopranos playing Zerlina, Susannah, and Despina, roles that sound best when sung by a light soprano. Claudia Mahnke is a high mezzo, but her tone is still unsuitably dark. Oddly, she seemed to have a problem at the low end of "Batti, batti" (strike me, strike me), an aria that goes only as low as middle C. Bringing it all together was Music Director Donald Runnicles, who was thoroughly on. From the driven, melodramatic overture, entirely appropriate for the production, to the beautifully balanced mask trio, to the terrifying finale, he led a subtly gorgeous performance. As in last year's magnificent Tristan und Isolde, the balances within the orchestra were an unobtrusive miracle, providing near-perfect support to the singers. The pacing went somewhat slack in Act 2, after the dynamism of the first act, but by and large Runnicles was at his best with this great music. As the run proceeds it's likely that the bumpy places and ensemble issues will improve, so buy your tickets now.