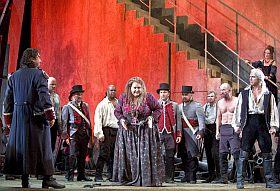 Steven Winn on September 13, 2009
It’s a curious fact about Il trovatore, Verdi’s "magnificent demonstration of unprincipled melodrama," as Joseph Kerman called it, that this 1853 potboiler contains so much dramatically still water. No sooner does the curtain rise than a captain launches into a lengthy, action-stalling account of events that happened years before. And that’s not the only instance of extended exposition in Salvatore Cammarano’s creaky libretto, based on the Antonio Garcia Gutierrez play. Il trovatore, it seems, happens as much in the past as it does in the present. "Avenge me!," Azucena's mother's haunting exhortation, is the opera’s defining line, though she is dead before the opera begins.

If the San Francisco Opera’s gala opening-night audience was prepared to settle in and be patient on Friday, they were quickly disabused of that notion. As a front drop of swarming Goya-esque faces flew up to reveal a towering palace wall and ominously long flight of stairs (by set designer Charles Edwards), this Trovatore quickly seized attention. Burak Bilgili spun out Capt. Ferrando’s tale of gypsy bewitchings, fiery deaths, and a miraculously spared child with gripping urgency. A chorus of soldiers expressed their alarm in tense unison. Most of all, the orchestra supplied a powerful undertow, rhythmically supple, by turns yearning and pungent, everywhere surgingly alive.

The best and biggest news of what turned out to be a night of mixed results was Nicola Luisotti’s official coming-out party as the third music director, after Sir John Pritchard and Donald Runnicles, in the company’s 87-year history. From the aching string sighs that accompanied the first act aria of Leonora (Sondra Radvanovsky, in a triumphant company debut) to the furnace-blasts of brass in the "Anvil Chorus" to the lonely but insistent bassoon notes that became a fateful pulse in the last act, perfectly judged details were woven into a purposeful whole. Even the occasional divergence of singer and orchestra only served to underscore the overall keenness and subtlety of communication between the stage and the pit.

Take, to choose just one of many instances, the Act 2 exchange between Azucena (a formidable and impressive Stephanie Blythe) and the opera’s eponymous troubadour, Manrico (an impassioned, if wayward, Marco Berti). As the stream of feelings flowed through a guilt-ridden mother and the man she raised as her own son (after incinerating her own), the music tracked them with a revealing surety. Dynamics, phrasing, even tightly coiled silences had an uncanny, intuitive rightness. Blythe's Azucena came across as a complex woman both sinned against and sinning, at once righteous and wheedling, determined and doomed. Berti punched out a stirring declaration in "Mal reggendo all’ aspro assalto" (Unable to withstand my bitter assault). But he was more moving and more real in his fleeting puzzlement at sparing his rival’s life in a duel.

Effective and psychologically astute as such moments were, nothing matched the vocal and dramatic impact Radvanovsky made as Leonora. With a voice full of a ripe and sometimes fibrous tremolo, this compelling American soprano gave her character’s ardor a full-bodied, physical immediacy. Instead of airy musings about Manrico, Radvanovsky communicated appetite and need. She sang pointedly, not always prettily. Her desire was a force, abruptly pressing her down to a sitting position on a stair, then flattening her full out and writhing on her back. It was bluntly sexual, but no one sniggered. The performer etched Leonora’s arc so decisively at the start that she was able to play the desperate acts of suicidal self-sacrifice at the end with an almost becalmed clarity and not a hint of histrionics. It was all marvelous to hear and witness, from beginning to end.

Excerpts from a preview performance of
SF Opera's 2009 Il Trovatore
The same cannot be said for the evening as a whole. Coproduced by the Lyric Opera of Chicago (where it premiered in 2006) and the Metropolitan Opera, this Trovatore had a certain settled stateliness that worked against it. As the large and oppressively massive sets wheeled into view on a turntable, washed in color now and then by Jennifer Tipton’s lighting, the cast began to look daunted and dwarfed. David McVicar’s direction, restaged by Walter Sutcliffe, resorted to flat-footed tableaux, especially in crucial ensemble scenes. Even company favorite Dmitri Hvorostovsky, as the passion-driven Count di Luna, sang with more handsomeness than intensity. A deep, driving obsession with Leonora never quite materialized in all his burnished singing.

While this may not have been a Trovatore for the ages, it did signal a brightly promising new musical era for San Francisco Opera. With Luisotti as music director, audiences can anticipate what Kerman envisioned in his book Opera As Drama. "Like poetry," he wrote, "music can reveal the quality of action, and thus determine dramatic form in the most serious sense."