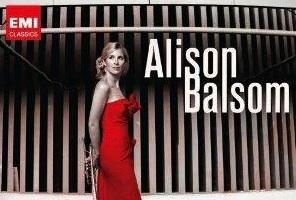 A Trumpet Without the Ouch

If your idea of a trumpet is being awakened at sunrise with a blaring reveille, Alison Balsom’s new EMI compilation is not for you. Instead, Balsom offers a mellow yet highly varied program that highlights her distinctive tone: smooth, subtle, dry — in a word, classic.

Numerous popular, but non-warhorse, numbers are included. Piazzolla’s Libertango and Esqualo are there. Yet another version of Rachmaninov’s Vocalise appears. Arrangements of concertos by Marcello and Albinoni, a Bach sonata, and the traditional numbers Shenandoah and Nobody Knows are not unexpected in an album of this type. They are nicely, if not stunningly, performed — yet are not sufficient reasons to obtain this release unless you’re a devoted fan of this artist.

What makes Balsom’s recording more interesting is the scattering of five more-unusual works among the 11 standards. James MacMillan’s Adagio from Seraph for Trumpet and String Orchestra is simultaneously aloof and haunting, with an “Unanswered Question” of a trumpet line counterpoised against a highly Romantic violin solo and string orchestra. Messiaen’s Vocalise Etude, pour voix élevées has a similar effect, with the strings replaced by organ. The little-known Czech Baroque composer Johann Baptist Georg Neruda is represented by an Andante from his trumpet concerto. And Debussy’s three-minute flute solo Syrinx sounds splendid as arranged for trumpet, as does Oskar Lindberg’s Old Pastoral Hymn from Dalarna.

What makes Balsom’s recording more interesting is the scattering of five more-unusual works among the 11 standards.

Balsom’s virtuosity shows only in the final number, the Libertango. The rest of the time, her instrument is not in your face, the result being that, if you’re no brass fanatic, you can take the entire record at one sitting without tiring of the trumpet sound. This is a tribute to both her playing and the skill of the compilers who assembled these selections from her other albums. Shame on the latter, however, for not giving source information, credit to the other soloists, or even timings. (FYI, there are a fairly generous 62 minutes of music here.)

All in all, this disc offers a fine introduction to Balsom’s talents, as long as you don’t already own other albums of hers, in which case there will be duplication.