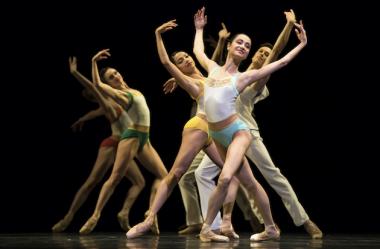 Unbound Reveals the Bright Future and Robust History of the S.F. Ballet

As the San Francisco Ballet’s Unbound Festival continues unveiling premieres, the past is coming into focus as clearly as the future. Reminders of dance’s history and foundations, as well as other looks back, abound.

Perhaps the loveliest of them is Bespoke, Stanton Welch’s new ballet set to familiar J.S. Bach: his Violin Concertos in A Minor BWV 1041 and E Major BWV 1042. You’ve perhaps heard their strains in other ballets, notably Paul Taylor’s immortal Esplanade, and that’s not a bad thing, even if little ear- and mind-worms are crawling all over you in the War Memorial Opera House. Compare and contrast, and enjoy.

As much as Welch’s inventions, the San Francisco Ballet’s dancers make it impossible to look away. They seem better each year, and each year there are some new wonders worth watching. In Bespoke, the seventh ballet Welch has made for the company, Alexandre Cagnat, new as of 2017, a corps dancer from France by way of the San Francisco Ballet School, opens the piece with a very grand plié in second position. Welch has decreed that this part be done in silence. Cagnat’s in white pajama-like clothes, by designer Holly Hynes, and the moment as well as the lambent light, by James F. Ingalls (who deserves major kudos for lighting the entire festival innovatively and equally importantly, clearly), puts the audience in intimate acquaintanceship with the lives of the people on the stage.

The level of their devotion and our attention cannot be understated. As the music begins, other superb dancers, men and women, come into view and the dynamics of their moves shift and ride, playing faster and slower, with the Bach and against it. Jetés, échappés, passes, long-legged poses where a woman strikes a split against a man’s shoulder and holds it there. Since Welch — artistic director, by the way, of the Houston Ballet — has missed nothing, neither do we. He even replicates a moment from Balanchine’s Concerto Barocco, that paradigm of neoclassicism, where the women execute stop-action ports de bras, letting us focus on every pellucid moment while reminding us that even a serious piece has no limitations on wit. Men as well as woman stretch with the temperature of the Bach, in deep penchés, runs, and leaps. As in Esplanade, there are moments of the warmest appreciation and affection, as couples pat each other’s torsos, cradle and tilt each other as they launch into finger pirouettes, where the woman is literally turned by the motion of the man’s hand above their heads.

The 12 dancers, six men and six women, seem to represent the cream of the company, or at least part of it. To watch Bespoke is to revel in its richness. Other fine performers — oh, here they all are, and thanks: Sasha De Sola, Isabella DeVivo, Mathilde Froustey, Ellen Rose Hummel, Jennifer Stahl, Jaime Garcia Castilla, Carlo Di Lanno, Angelo Greco, Esteban Hernandez, and Lonnie Weeks.

Your Flesh Shall Be a Great Poem, set to work from American songwriter Chris Garneau’s El Radio. was choreographed by Trey McIntyre, a Kansan and also a Houston Ballet alumnus who now has his own Trey McIntyre Project.

The piece is a memoir and an elegy. If you didn’t read the program book, you might not understand all the ballet’s particulars, but no matter. In thinking about the life and death of his grandfather — an undertaker — McIntyre has put his heart out there for all to see and feel. In capturing his relative’s rangy physicality and spirit, danced by Benjamin Freemantle but echoed by the other five men, with a delightful and strong supporting cast of womenfolk, McIntyre’s also managed to bring an air of the open west and the open sky, opening the piece with a backdrop showing a solar eclipse, which, he said, corresponded to the first day of rehearsals, and ending it under a golden sun. His youth, embodied in the tender and sexy pas de deux of Isabella DeVivo and Steven Morse, gives way to more weighted moves for the cast, defining not just the residents, but the self-contained and independent world in which they live.

Not only did his grandfather seemingly bestride that earth even as he grew older, he did it in his underwear, walking that way around town as dementia set in. The moves assigned to Freemantle at the close of the ballet poignantly intermingle resignation and defiance as he stands on a stool in his shorts, waving off all who would come between him and the end he still wants to achieve, an interlude that conveys not just his impending mortality but ours, and asking what all of us wish to experience, to hang onto, and to leave as a legacy.

It is painful to report that Annabelle Lopez Ochoa’s Guernica, a consideration of the (unseen) Pablo Picasso mural as well as the agony and defiance the Spanish Civil War engendered, is rather weak tea. This despite the best efforts of the cast, which included Dores André, whose intensity and precision makes her a worthy successor to the now retired Lorena Feijoo, and her equally fiery partner Vitor Luiz, and their opposite numbers in a strange quadrille, Julia Rowe and Myles Thatcher.

Posturing, leaping, and posing in elegant black costumes (by Mark Zappone) with little horns on one’s head against a blood-red backdrop, it turns out, can only take a ballet so far. Guernica’s real (and many would say too explicit) depiction of the horrors of war somehow never came across; the formal arrangement of dancers never descended into chaos. That pageant-like formality, including the bloodless evocation of a bullfight, would have made it well-suited to a Las Vegas show. The music, by composers Joe Andrews, Michel Banabil, Tom Halstead, and Charles Valentin-Alkan, with pianist Ronny Michael Greenberg, created a simulacrum of spirited angst, but in the end — with a first, false ending marked by timid applause — it wasn’t enough.

Edward Liang’s The Infinite Ocean, which opened the festival’s final program, D, Thursday night, began with the dancers walking into the light, represented by a golden disc on the backdrop. The preponderance of discs throughout the festival spoke to the economy of sets versus the care invested in the creation of new work. The use of this cost-cutting device, the perfect and versatile disc, is completely understandable; literally and figuratively, it’s a universal solution. But it’s also mildly repetitive. The other question is, Here’s a sun. Do the dancers have to walk toward it? Frankly, in a meditation on life and death and the interstices between them, it’s no cliche. In fact, Liang has it make elegant good sense.

Led by Sofiane Sylve, Tiit Helimets, Yuan Yuan Tan and Vitor Luiz, the dozen artists in Mark Zappone’s striking golden costumes danced to Oliver Davis’s score, played by the San Francisco Ballet Orchestra under the direction of Martin West. Heeguen Song was the fine violinist. The dancers memorialized living, if that makes sense, with a wonderfully vigorous men’s dance, as well as via two intriguing pas de deux, most strikingly in the work of Tan and Luiz, who lose each other but continually circle the others as they search for their destiny, which is to always be together. They embrace on the floor, and then he raises her up and all will be well with the world. Similarly, the happy climactic moment when Helimets raises Sylve, somehow levering her up in a move, as if he were using a jack. It looked far more elegant than it sounds, and twice as inventive.

Dwight Rhoden’s Let’s Begin at the End, set to the music of Bach, Philip Glass, and Michael Nyman, finds the artistic director of Complexions Contemporary Ballet in full command of a ballet that demands everything of its dancers. Deliberately, he threw a spanner into the works, having added a male soloist (Esteban Hernandez) to a ballet of seven couples. So every allusion to conflict and every resolution embodies, in its own way, a third party. Divisions become more acute, but then so do reconciliations. For additional challenges, there are seven doors (even though the dancers only emerge from upstage). He has set a mental trap, a complexity to be dealt with in its own way.

Fortunately, he has Frances Chung and Angelo Greco, Sasha De Sola and Benjamin Freemantle, Jennifer Stahl and Ulrik Birkkjaer to help. At a vigorous mid-career (Complexions is 25), Rhoden is a fluent guide with a tremendous vocabulary of moves — melting and staccato, slow and fast, forceful and yielding — at his beck and call. To begin at the end would seem to mean to begin the ballet with peak energy and focus. But Rhoden has created something that compels attention throughout. It needs to be seen again, and probably again after that.

Conductor David Briskin led the orchestra, with Mariya Borozina on violin and Natal’ya Feygina on piano.

Can we please talk about Björk? That’s as in Björk Ballet, which closes the festival’s program D. With all due reverence for Iceland, which we all want to visit before the tourists ruin it, and for San Francisco Ballet artistic director and Iceland native Helgi Tomasson, who put together the whole absorbing shebang that is the Unbound Festival of new works, I don’t get her. Admittedly, I’ve never before listened more than fleetingly to her work, which provided the score. But also admittedly, it was difficult to listen to.

True, the keening, whining vocals fit in well with the environs, which seemed a mixture of the life aquatic and the life nightclub-ic, well-salted with snatches of mythology, dreams, and tinsel. The choreography was by Arthur Pita, and it seemed of a piece with the set, which he designed; the fanciful costumes, by Marco Morante, and the music. In its lightweight, artless naivete, it felt and looked like a program crafted for a school assembly.

Safe to say that Björk lovers will enjoy themselves; there’s a fairy in pink tights (Maria Kochetkova), and butterflies, and an old fisherman in a mask that he switches from sad to happy. He was happy when it ended. And so was your reviewer.

After only half the festival, Helgi Tomasson's company is already well-stocked with new pieces.